1. STOP CARING ABOUT WHAT OTHERS THINK!

I may or may not have touched upon this previously, but before you can do anything else you really need to stop thinking what other people may think of you, no matter if it's a positive thing or a negative thing. Of course, it's easier said than done - we've all been socially programmed to obey the norm and rules that society has placed upon us, so it's about time you took a step out of your comfort zone and embrace life...legally, of course.

2. Re-discover all your favourites things

If you want to start expressing yourself, it's best to start with the basics - what kind of music do you listen to? Who is your role model? What's your favourite food? Are you gay, straight, bisexual, or transgender? What are your political views (be careful with this one)? Hopefully, when getting to know someone, it gives you a starting point. If they like it, then blast away, if they don't, then that's OK. It's not the end of the world if someone doesn't like that one thing you really love. They shouldn't judge you for it - unless it's murder, then they have every right to judge you. No, I don't care if Becky said things behind your back...You. Don't. Kill. People.

Have you ever noticed that when you're being creative, some of your normal reservations fall away? You might find yourself in a play with people who you are usually pretty shy around, but who you feel totally cool reciting Shakespeare in front of. Or you might sit in the middle of a public gallery and feel completely comfortable drawing. Art can allow you to express yourself in ways that you might not know how to with simple words, and it can help you to communicate your deepest emotions with people you barely know. Sometimes it can make the world fall away. If you're stuck in your own art form, why not try something new, and see if you learn something new about yourself.

When I say reminders, it means making use of physical objects to express the things you like and the things you believe in, such as clothes and accessories; this could come in the form of a crucifix, a bracelet, a turban, a hijab, a t-shirt that says "ROCK OUT", a baseball cap, posters on your wall of your bedroom of people you admire - anything that makes you feel comfortable and reflects you as a person. If you want to wear high heels and short skirts, go for it. If you want to wear gold jewellery and a vest, do it. If you want to dress up as Donald Trump and mock him relentlessly, I'll pay you for it!...*ahem* Moving on…

This is the serious part about expressing yourself publicly. I know I said you shouldn't care about what others think, but there's expressing yourself, and then there's shoving your identity in other people's faces. It works both ways - you don't like it when someone tells you it's wrong for you to like fish fingers and custard, so what makes you think that it's going to work when you say the same thing to someone else?

You can still express yourself freely, but don't shun someone for behaving differently, because that's plain textbook bullying. All I'm saying is that when it comes to self-expression, you need to be careful to not cause offence - if you respect someone's perspective on things, then they'll respect your perspective on things. It's a win-win situation!

6. Don't expect things to be the same

Ah yes, now here's the depressing part of the article. As time goes by, you'll suddenly find yourself liking different things, you'll end up with a different style of clothing, you'll end up making new friends who are different from your old ones, and you may even grow apart from some of your old ones. As a young person, you are growing up, and therefore you're not going to be a young person for much longer. Of course, you'll still be the same person, and you will still be able to express yourself, just not in the same way.

As you enter your 20s, you'll probably be left to your own devices. You'll end up balancing a full-time job with a social life, as well doing the things you love. This ties in with expressing yourself as it's basically finding more than one way to show off who you are, such as the job you go for, the people you meet, where you live - and that's why it's always important to...

7. Never forget who you are!

Now for the most dramatic part of the article. You will grow and change as a human being, but the memories from the past will always be the same - obviously there will be moments that you'd rather forget but they're just as important because they help shape who you are. Funnily enough, you're still you, but a grown-up version, and that's both pretty exciting and scary. It's human nature to migrate and adapt to new situations, but it's strange to think that a person who used to go to music festivals is now married with children. Do you ever think you'll some day go from being quiet and antisocial to going out nearly all the time? Believe me, it happens…

That's it from all my advice about expressing yourself in the present and future! It may seem tough, but everybody finds a way in the end, don't they? 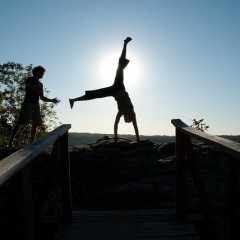