No matter what industry you’re in, the idea of having to network brings people out in a cold, nervous sweat. There’s something about having to sell ourselves and our abilities on the spot that just doesn’t sit right with some of us, but it’s become a recurring ask for anyone who wants to progress in their career.

John Schwab, actor, producer and co-creator of Curtain Call, hosted a workshop at TheatreCraft 2019 where he shared his top tips for successful networking that make the whole ordeal seem a lot more manageable and a little less scary.

John uses his diary to write down every interaction he has with people, and he advises you to do the same. It’s a great way to keep track of all your encounters so that you can revisit them and reach out as and when you need to.

Network before you need to

If you’re in school, college or university, this is where your network should begin. If you’re studying you’re already in the presence of likeminded people with similar interests to yours and that is not something you should take for granted. Network at the earliest stages of your progression and reinforce it daily by asking people what they’re working on and that if they need work doing that matches your interests then they should keep you in mind. As John says, “theatre people love to talk about themselves”, so taking an interest in others work is a great way to get you remembered.

Why is the preview of a show the best time to go for any future theatre hopefuls? On preview nights everyone is under the same roof. Directors, costume designers, sound technicians; all you have to do is go up to them at the end of the show and talk to them; lead with a compliment and then ask them questions about their choices. A little initiative goes a long way and it’s during this exchange where you can ask them if you can follow up with an email, or if they aren’t too busy even go out for a coffee to pick their brains. Just don’t bring you CV, portfolio or God forbid your own play to a preview, save that for later.

Especially in theatre, every single person plays a crucial role and that person should not be underestimated. When you go to trade shows, or theatre events (like TheatreCraft), talk to the people who are unoccupied, as well as those who have queues of people waiting to talk to them. Their insight may be just a valuable and it’s a crucial piece of one on one time that might just benefit you later on. Even if their job is not your interest, the company they work for just might be, so you can ask them questions like that and make a useful contact.

John could not stress this enough. Building a genuine relationship with someone in the industry is the difference between keeping you in mind for an upcoming opportunity or not. People can see whether you’re actually interested in them or just interested in helping yourself. Networking is all about building bridges and meeting people halfway, that’s the only way to guarantee them coming to you. Be an active listener, ask lots of questions, even repeat their name during conversation just so they know that it’s them you’re interested in. It builds up a level of trust (and flattery) so when it comes to their time to listen to you, they’ll be more inclined to.

Once you’ve had that initial conversation, always try to arrange a second meeting; John swears by taking them for a coffee. If they say no, don’t be disheartened, just ask them for their email address and follow up with them the next day. Don’t ask them for their phone number (too personal), don’t email them that night (too eager) and don’t leave it six weeks (shows disinterest). When following up with an email, John says to always open with ‘Thank you for taking the time to read this email’.

“If you thank someone for reading the email, they will read it. If you send an email like that they will know you for being considerate.”

If you don’t hear back from the person, leave it a week or two and then try again. Theatre professionals are very busy people which enforces the point of making as many contacts as possible.

Networking is all about who knows you, not who you know, so make yourself known. Make sure you have profiles on sites such as Mandy, Curtain Call, Star Now, keep them up to date and don’t lie about your abilities because you’ll always be found out. Go to trade shows, go to previews and most importantly, talk to people. “It’s all about increasing your bubble and plugging into your network.” 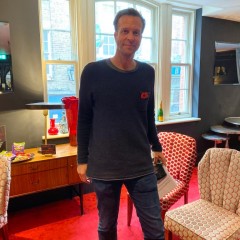