It doesn't feel like too much of an exaggeration to say that covering launch events from companies such as Apple or Google has become a lot less exciting - there is never anything announced that hasn't already been leaked. The same is true of their latest event, which happened on 21 March.

However, that is not to say this event didn't have some surprises. Rather than start their event bragging about how many devices they sold, or how many updates have been installed, they briefly mentioned how many devices were used worldwide, and then used that to springboard into their current battle with the FBI.

For those who don't know, there is a legal case currently ongoing (suspended at the time of writing) between Apple and the FBI, over gaining access to an iPhone 5C - which was used by one of the shooters. Apple have so far refused to cooperate, and Cook reiterated the "significant responsibility" they feel over protecting their users data. They argue that a precedent would be set that gives a Government dangerous powers. Whatever side of the argument you fall down, it was interesting to see Apple address it so blatantly.

Immediately after this, Apple spoke about their responsibility to protect the environment. They aim to be 100% renewable, and are currently 93% of the way there. In fact, their operations in 23 countries across the globe are already 100% renewable. We then were told that we can feel good every time we use Siri, because we are saving the environment. Apparently? We then saw a robot called LIAM, who can completely dismantle an iPhone to reuse the components. Admittedly, it was pretty cool to watch it at work.

Next, Cook returns on stage briefly to introduce Jeff Williams, who is talking about health, and how Apple are working with leading institutions to improve health care, health tracking, and medical diagnosis. We were shown a very feel-good video about how their "radical solution" ReseachKit resulted overnight in the largest ever Parkinson's study. With that, came the announced that CareKit was being launched, which was presented as "a framework to build apps that empower people to use data to understand their health". The first app built is again helping those with Parkinson's, although there is work to create an Apple watch app that can predict epileptic fits. It will also aid doctors and patients with managing their post-operation care, and see how people are responding to medication.

It was after this section though, that Apple returned to the more familiar, and, dare I say, the less interesting.

The first mention of their product line came with an update on the Apple Watch. It's apparently the best selling smartwatch in the world. Cook said that one thing people love about the watch is being able to change the bands, and to that end, they have created some new ones. There is a new style of band, called woven nylon, and that genuinely got a round of applause. One interesting bit from the incredibly brief watch segment was the use of the term "new spring lineup". I thought that was a very fashion orientated attitude, and is perhaps more symbolic of Apple's intention behind the watch - fashion before function.

Next came the Apple TV. Constantly played down as a hobby, the update pretty much confirmed that. I actually managed to fit the whole update in a single tweet. The tvOS will receive a software change soon that will allow folders on the home screen, dictation, Siri for the App store, access to the iCloud Photo Library, and support for Live Photos. That's it.

"As you may have heard…"

Starting with the iPhone 6 and 6+, Apple went from a 4inch screen to a 4.7 and a 5.5inch display respectively. Turns out that there are many people didn't want a big phone, and stuck with their iPhone 5S. Others may be new to the iOS platform, so went with the cheaper 5S OR 5C option. Either way, Apple have now released a new 4inch phone, but it has the same performance as the iPhone 6S. Acknowledging the leaks, Joswiak announced the name as such - "As you may have heard, we're calling it the iPhone SE. It has most of the features as it's larger siblings, but for some reason does not have the pressurised screen feature, called 3D Touch, which for those of you who don't know, is like having a right click function build into your phone. Also - amazingly, it STILL comes with 16GB storage as standard. In 2016 - when the phone can record 4K video and Live Photos, that is just unacceptable.

It was here that Apple really began blasting through the presentation at a rate of knots. It started with a quick jab at Android, because iOS's latest release had 80% adoption rate, and Android has 2%, which to be fair, is not the best. 9.3 is touted as one of the biggest x.x releases they have ever done, although they their list of changes were simply rattled off. Night Shift is coming in 9.3, which removes the blue from your screen in the later part of the day - basically exactly what f.lux has been doing for years. Notes now can be passcode or fingerprint protected. Health has been updated to have suggested apps directly in the app itself. News is now faster and more personalised with top stories and editors picks. Car Play will work better, with an improved Apple music and Maps.

Did that all seem highly concise and lacking in information? That was basically the speed at which the points were discussed.

Phil Schiller took to the stage to talk about the iPad Pro. It started with three quotes from some very influential designers - John Lasseter (Chief Creative Officer at Pixar), Stephen Gates (Head of Design at Citi), and Alex Valdman (Head of Design at Rapha). What do all these people have in common? They are designers. That would suggest that the iPad Pro is aimed largely at those who work in the creative sector, no?

Apparently not, as Apple touted this as a device to those who haven't upgraded their PC for more than five years. Apple claim that 600 million PC's that are over five years old, and Schiller called this statistic "really sad". It's difficult to know the intended meaning of the comment, but it came off as elitist, self-congratulatory, and suggesting that those who aren't caught in an annual upgrade cycle are in someway worse off. It was a cheap move on Apple's part, and the internet seems to agree…

There is a new model of the iPad Pro, that will exist alongside the current 12.9 inch model, and it has a 9.7inch screen - the same size as other iPads (not the mini, obviously). It weighs less than a pound, has the least reflective screen available on a tablet, and the brightest screen available. It also has what Apple are calling a True Tone Display, which means that the screen will get warmer or cooler depending on the lighting conditions you are in. I will confess, I thought that was really cool. Like the bigger pro, it has plenty of "grunt", and four speakers. Schiller mentioned that it actually has more graphical power than an Xbox 360.

It has a myriad of accessories with it, including a 'smart keyboard' and "the greatest accessory Apple has ever made" Apple Pencil. That's quite a bold statement from Apple. It also has a new range of Lighting adaptor accessories, including a card reader and a USB camera connector. Because Lightning cables can provide power, this means you can plug things like standard USB microphones into the iPad through the adaptor, and start recording a podcast.

Thankfully, this Pro tablet starts with 32GB storage as standard, and for the first time will go up to a whopping 256GB configuration. It will also have a rose gold colour option.

This felt like a very safe, run-of-the-mill affair for Apple. There was nothing particularly revolutionary announced, and nothing that hadn't already leaked before hand.

The whole event felt very rushed. Given that, realistically, they didn't have very much to say, they could have afforded to slow things down, and spend even an extra minute on each major announcement, trying to convince us as to why we should care.

If I had to choose a word to describe it, "meh" would be the one that came to mind, but I could probably tax myself to come up with "rushed" or "iterative". There was a lot of tweaks to software, a few accessories, and two new devices that are simply a change in form factor, as opposed to a new product category, or even an substantial change in hardware.

For me, the parts that were interesting were the parts where Apple wasn't talking about products. The whole discussion over their "responsibility" to protect user's privacy is a debate that isn't going away any time soon. I thought it was good how they also addressed wider societal issues such as the environment, and health; an area that I think technology companies can have a lot of impact in.

It might be hyperbole to proclaim that Apple is losing its charm, but there was certainly nothing 'magic' about the event, and that comment regarding how really sad it is that some people don't want to, or can't afford to upgrade their computers left quite a bitter taste in my mouth. A fleeting comment, but one that can completely alter the perception of an event.

Photo from The Verge 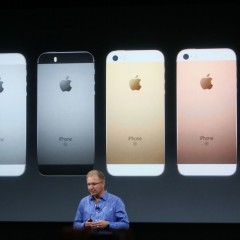