Voice MagFeaturesVoice through the ye…

First conceived way back in 2011, Voice has undergone significant change, including a complete rebrand. What’s never changed is our commitment to youth voice and creativity. Now, as we launch our latest homepage rebuild, designed to showcase more of the great array of content we publish alongside our readers work, we thought it a good time to look back to our humble beginnings

Trinity College London, the organisation behind Arts Award with Arts Council England, recruits a project manager to explore how young people can inform, influence and be a part of Arts Award’s growth. That recruit was Emrys Green. He was fresh from University, but probably more importantly, he was a Silver and Gold Arts Award achiever.

We start consulting with other achievers, young people in the arts and cultural sectors, and those who were currently doing or wanted to do an Arts Award. Working with the newly formed Arts Award Youth Network – comprising of young achievers from across the country – we collectively discussed the information and capabilities that we’d want to see, and went about designing a site to meet those needs.

Fast forward to 2012 and we started the commissioning process for a website that had information pages, the ability for participants to blog and review art work, and to find events and opportunities. This launched on Monday 15th October 2012, and was called Arts Award Voice. For the technically interested, the first site was built on a Drupal platform, which is an open source website management system. The first website looked like this: 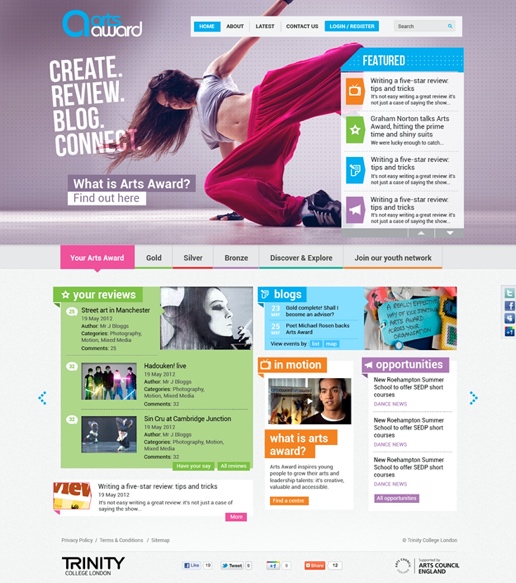 After our launch we were able to monitor how the site was used and the following year we refreshed the site a little with the main aim of ‘maturing it’ and introducing the concept of a magazine website, launching 2nd May 2013. The aim of the refresh was to better bring information, portfolios and featured content together, and as part of that we had a new homepage and then a new magazine landing page. Nearly 15,000 users browsed the website in our first year (with over 21,000 visits). 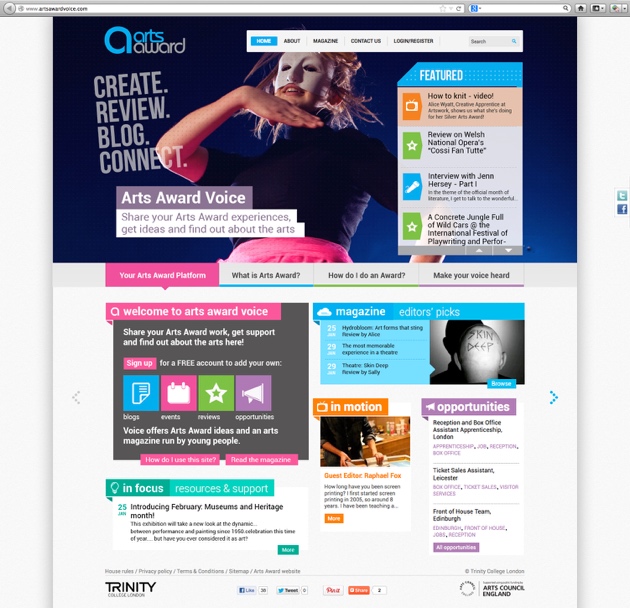 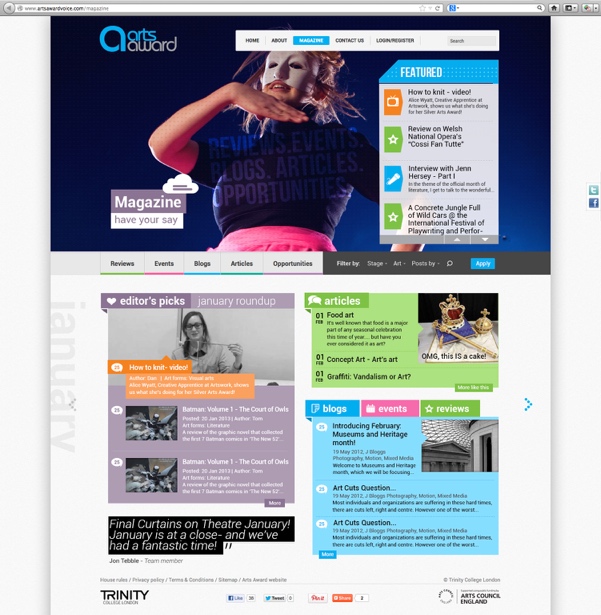 Later that year we also introduced support for building a portfolio online, taking uploaded content and being able to organise it in your section on the site; called ‘My Work’.

In 2014 we continued to develop new small features on the site to improve user experience, such as how we collect content and display them in series pages for example. We also released a further visual refresh of the website. This further ‘cleaned up’ our aesthetic, supported quick access to more areas of the site, and put ‘Voiceboxes’ to the front and centre. Still used today, Voiceboxes allow us to collect many types of content in to one ‘box’ (content collection) regardless of the user; such as content around festivals, pride, or global art. 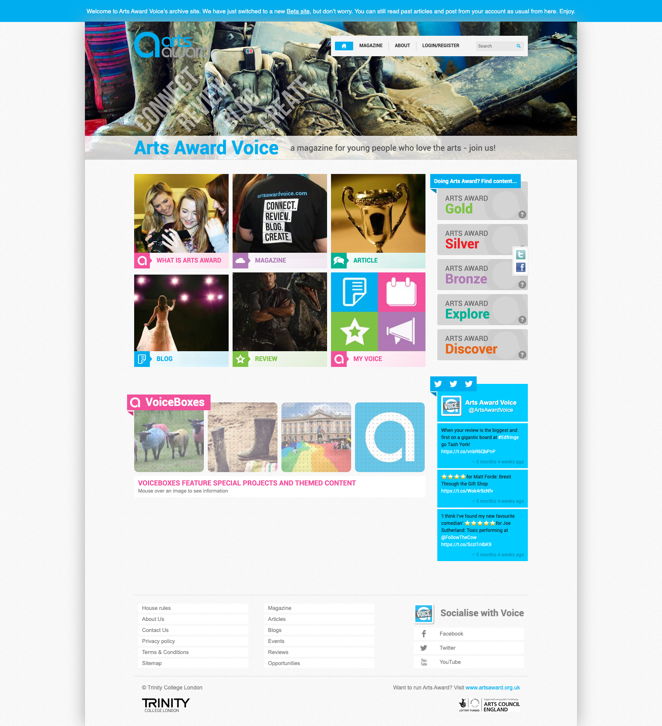 A major step forwards occurred in 2015 when we moved the website to a whole new platform with a fresh new design. Our aim for this big move was “to reduce bounce rate, enhance integration of content and make the site appeal to a young, modern, tech savvy audience.” Moreover, our objective evolved, striving to “offer a dynamic, interactive magazine-style website which is of interest to a wide range of young people, whether or not they have previous knowledge of Arts Award eg. feature articles, interviews, blogs, competitions.”

This is the start of what you know and love today as Voice Magazine. The design brought with it better visual indicators between content, easier finding of what you want, and generally supporting our growth and range of content.

We also moved the website, from Drupal to a bespoke build on the Laravel framework. Both use ‘PHP’ but the advantage of our new approach is that we have even greater control. That doesn’t mean everything has been coded from scratch, but it does mean we had developers put everything together and write a lot of the underlying code on top of a hugely used and supported code platform.

We removed the ‘My Work’ portfolio functionality due to the launch of ArtsBox as a separate platform. However, we did launch another content type – the ability to collect together videos in a new video Voicebox page. There were also significant improvements made to the user uploading flow, and major enhancements to how we manage the website. 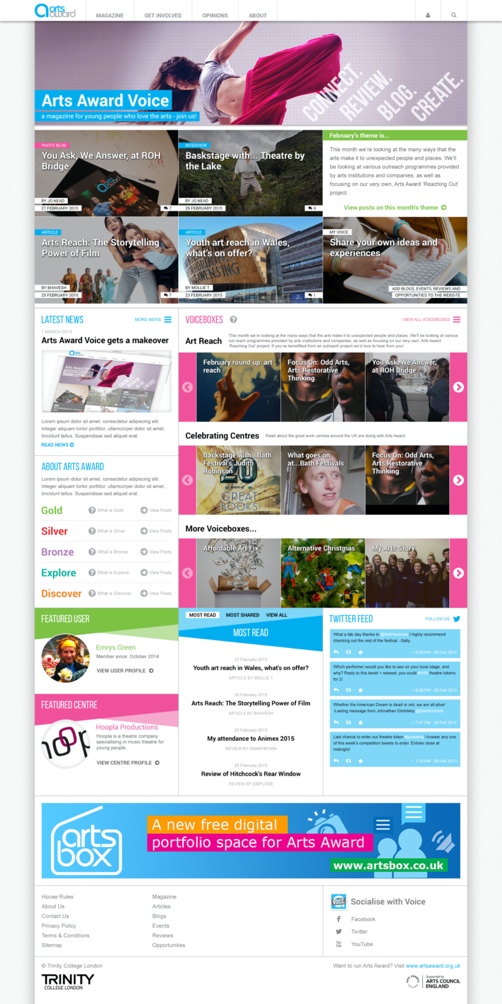 Enter 2016 and we began working on further improving the journalistic aspects of the website, content curation and creation. Some of the work we did includes the ability to embed from more sources, and making optimisations for the website. Alongside this. We also started development for our Arts Award Alumni network.

However, increasingly we were finding that as we had continued to grow, the mix of Arts Award content alongside the wider commentary and journalism we were doing was confusing to the reader.

As such, we also turned our attention later in the year to a major revision, designing voicemag.uk, and the new Arts Award Hubs. Instead of another pretty mock-up, here instead is an insight into how such ideas start out – amazingly you can just distinguish how the current Arts Award hubs build on this sketch: 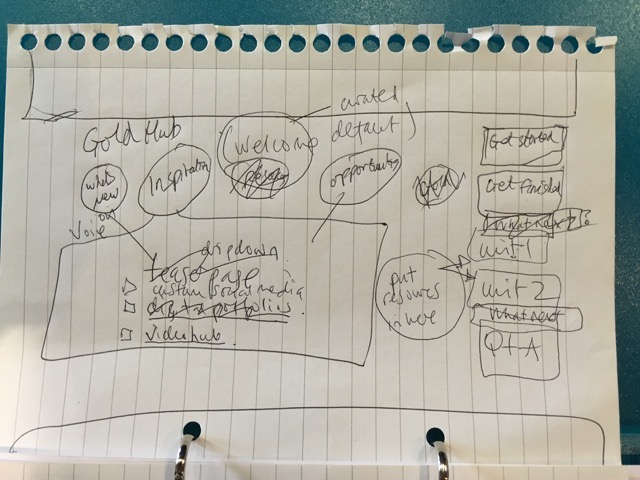 All great ideas start as a scribble... Behold, the Arts Award Hubs

On 25th April 2017 we unveiled voicemag.uk and Arts Award on Voice. With the unveiling, we showcased totally new branding alongside an amended content structure which placed our wider journalistic, careers related and feature content under the new Voice banner, while collating all of the great Arts Award content in to a new ‘Arts Award on Voice’ area.

It also brought team-only review star rating selections – perfect since 2017 was also the year we became Youth Media Partner with Brighton Fringe, offering the Best Newcomer Award for those bringing their first show to the Fringe. This followed a few successful years of work at Edinburgh Festival Fringe, Latitude Festival, a few smaller festivals and of course, at Brighton Fringe itself.

We additionally created new social media accounts, an updated technical backend (to support the growth in content) and added further updates to our data collection. Improvements were also made to the Arts Award Alumni and our analytics to better see how the site is used. We also created RSS Feeds (to support integration with platforms like Slack), further refined our menu management, opportunities and events enhancements and the editorial process within our backend admin panels. 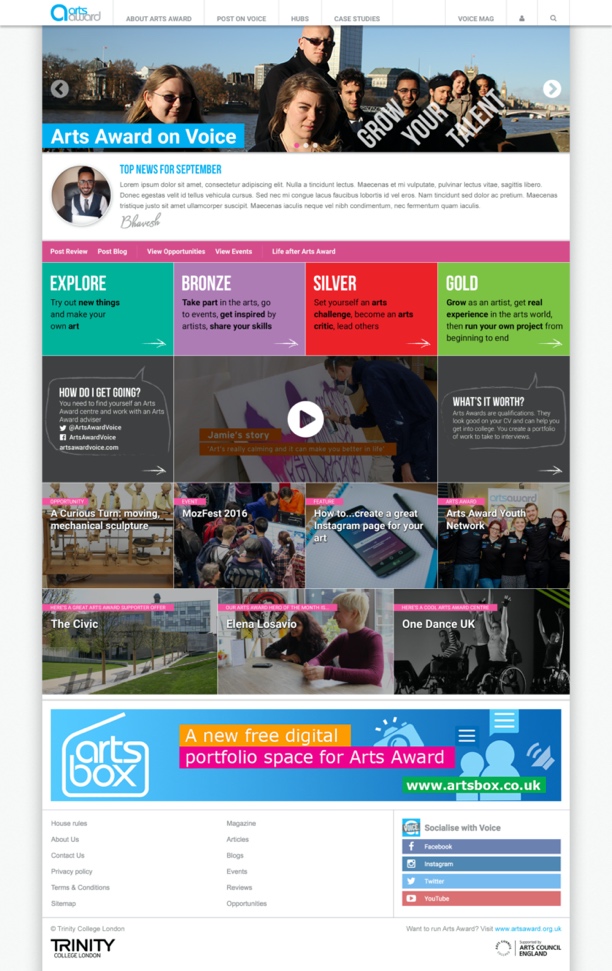 A mock-up for the new Voice homepage

Through 2018 we continued to develop small new features behind the scenes, a new Creative Careers page, and a major platform update early in the year. We also developed a number of new page styles and a part of the minor updates included showing the latest few posts by users in the authors section of a post and introducing our ‘you might also like’ overlays that appear when you scroll to the end of a post – helping people find more content they might like (either related or by the same person).

Whilst our total visits dipped slightly, we improved our bounce rate which means more people stay for more than one page and we weathered a substantial change to the money we had available to support Voice. 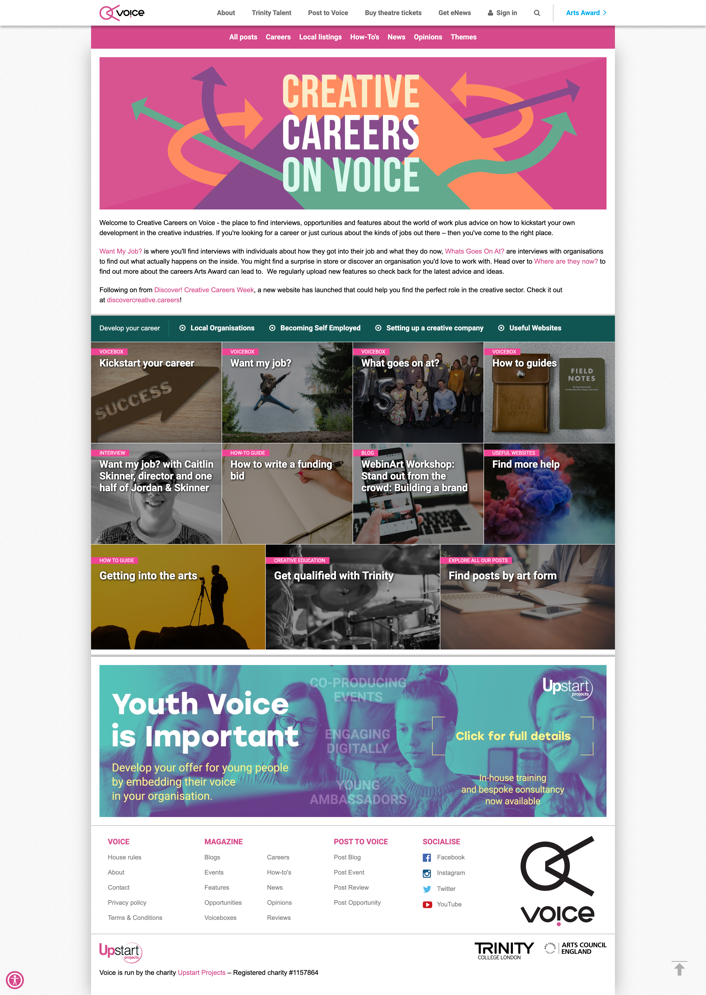 Last year was been especially incredible for Voice. We delivered more local journalism groups, supported more Voice contributors and almost doubled the audience from 2018, ending with nearly 17 times the number of visits we had in our first full year of 2013.

2019 saw us trial our first ‘Arts Award Editor’ internship which has turned in to an ongoing post, partner with Totally Thames Festival, and support the Creative Critics Programme alongside our own work at Manchester International Festival.

We also brought a new offering in to our community; discounted theatre tickets, through a partnership with Encore Tickets so now you can buy tickets to shows and experiences, and in doing so a small percentage of what you pay supports Voice’s work.

Alongside a number of minor technical and visual enhancements to Voice this year we have launched an update to ‘Portfolios on Voice’ where you can now mark any post you create as purely for your portfolio (so it doesn’t show up in general magazine listings) and organise them better to show up either generally, or for each level of Arts Award, allowing you to present your reviews for Gold with one simple link, for example.

We’ve also launched our new ‘Organisations on Voice’ functionality which automatically pulls in all the Arts Award Supporters and profiles organisations registered on voice, allowing us also to plot them, events and opportunities on to a lovely new map. 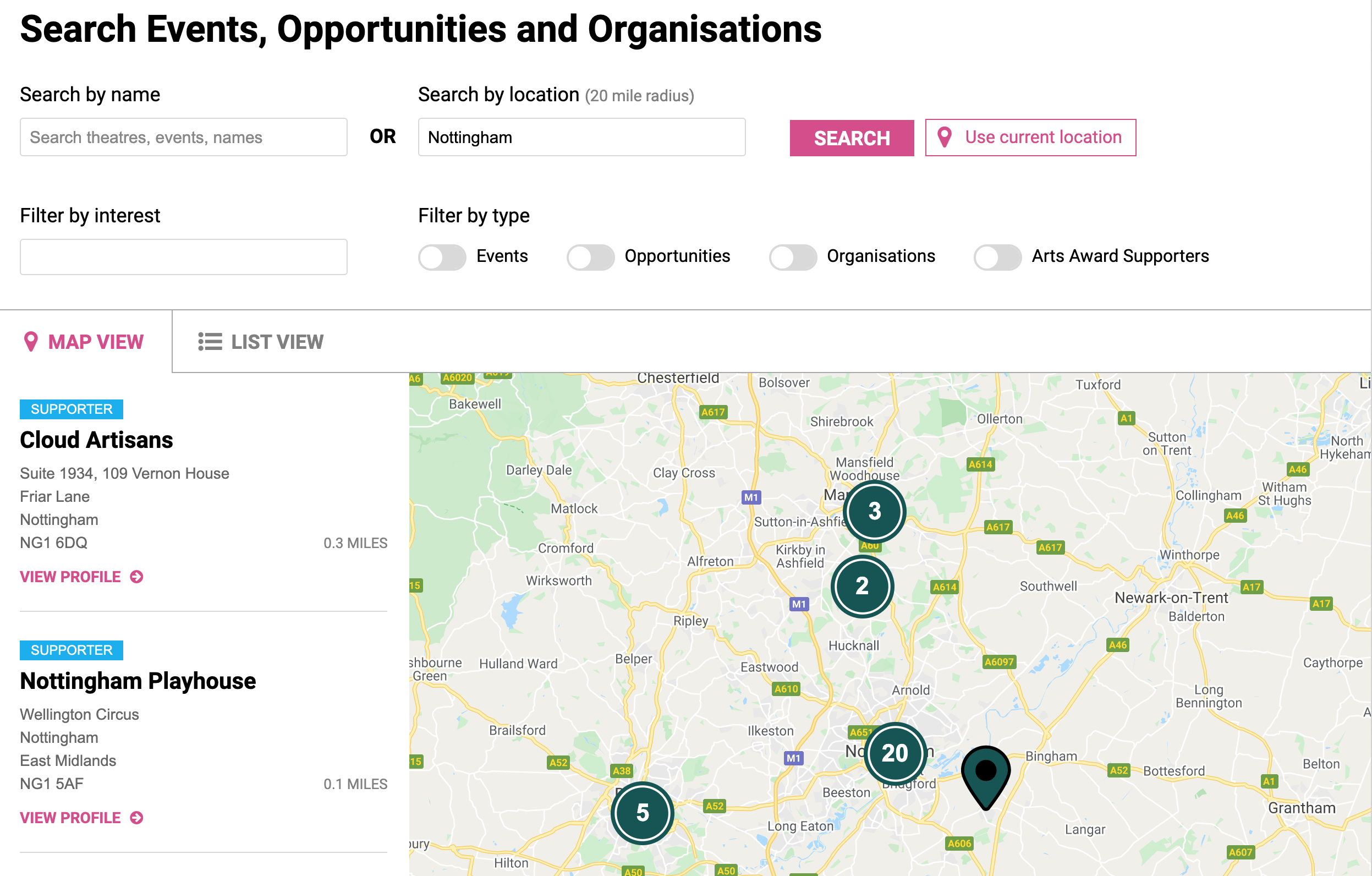 Our integrated organisations and listings page

Cloud Artisans became our new supplier in 2014, and from then until new they have worked on over 570 tickets! Each ticket could represent a minor tweak or a major overhaul like platform updates. That’s a lot of pro-active work and enhancements. As we launch yet more visual updates and embark on a programme of further feature improvements we are so pleased to have a great team of young people and staff around us.

The new homepage we’ve launched gives us a larger canvas to showcase the work from the team, as well as a dedicated area for user generated content to come through. We’ve replaced the Featured Video section with a more flexible module that allows us to highlight articles as well as video. The Voiceboxes have been refined and are now full width so you can see more content, and they work better on mobile! We’ve brought our theatre tickets to the homepage so more people can find affordable shows (that you might then want to review on Voice!) and have four content boxes at the bottom to direct you to other areas of the site.

We will soon be updating our Laravel platform which will offer even more functionality and security. We’re also moving the site to be hosted at a new data centre in London. In addition to improving stability and speed of the website, it’s powered by renewable energies. Cloud Artisans have also signed up to a carbon offsetting programme, so are paying for trees to be planted that more than offsets their actual usage of materials, power and vehicles. We face an unprecedented climate crisis, and we are proud to be making decisions to limit our impact.

We need your support to continue this work however; and there’s several ways you can support our work – from buying adverts with us, donating money or your time, simply buying theatre tickets through our site, or choosing Upstart Projects as your charity when buying with Amazon Smile. 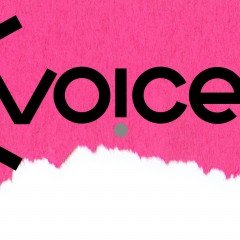 Voice through the years