Voice MagFeaturesTop five albums of a…

Any person who claims to know the top albums of all time is likely pulling a fast one. Most of these lists measure success by squinting at record sales and discerning, with the benefit of hindsight, the blurry outline of critical acclaim. Few are better than popularity contest – or worse, an exercise in ego. And yet here you flock, like the slavering sheep you are, to feed from my trough of ready-made opinion.

But why, the sceptical among you bleat, do we need yet another greatest albums list? Well, the times are a-changing. First, Elvis reigned as king. Then Michael Jackson stole the crown. And who rules the roost now? The Eagles. Yes, that’s right Lebowski. The Eagles. Last year the classic rockers overtook MJ’s Thriller in overall record sales with their Greatest Hits 1971-1975, reclaiming the top spot nearly a decade after the King of Pop’s death. With question marks over Jackson’s legacy, this trend is likely to continue.

Regrettably, as far as music is concerned, the public clearly cannot be trusted. Unless we all want in live in an Alan Partridge dystopia, where we’re all spoon-fed Best Ofs until our capacity to decide deteriorates, I guess you better listen up.

Now, where were we? Ah yes, open wide!

From Broadway musical to prayerful jazz standard, John Coltrane’s mesmeric take on Rodgers and Hammerstein’s bright-eyed rollcall of all things sugar and spice heads up one of the greatest cover albums of all time.

Appropriately named, My Favourite Things features Coltrane’s first album appearance on soprano, alongside McCoy Tyner (piano), Steve Davis (bass), and Elvin Jones (drums). Remarkably the studio recording took less than three days to complete. The album sold broadly for a jazz record, shifting nearly 50,000 copies in its first year, despite being release four years before the Oscar-winning film, The Sound of Music, popularised the track in 1965.

To get a sense of Coltrane’s incantatory, devotional sound, his performance on Newport ‘63 (Live) brilliantly demonstrates the extent to which he takes ownership of Roger and Hammerstein’s track, making Dave Brubeck’s 1965 attempt sound tinklingly trite in comparison.

Truly one of a kind, this album by John Coltrane is one of my favourite things – and should be one of yours, too.

Narrowly beating James Brown’s Live at the Apollo (1963) to the list as one of the greatest live albums of all time, Folsom Prison bristles with a near-riotous electricity which remains as edgy and compelling a listen today as it did over 50 years ago.

During the press tour for the album, Cash courted rumours that he had spent time behind bars despite having never served a prison sentence. The album was apparently inspired by the 1951 television drama Inside the Walls of Folsom Prison – and not, as was suggested, from personal experience.

As far as his own run-ins with the law were concerned, Cash was arrested for smuggling pills across the Mexico border but ultimately escaped conviction. Folsom Prison is testament to his status as a titan storyteller, musician and myth-maker. For more on this and the Man in Black himself, check out Rolling Stone’s article on Folsom and his legacy.

I Never Loved a Man the Way I Love You (1967), Atlantic Records
by Aretha Franklin

Aretha Franklin’s first album with Atlantic Records defined the singer-songwriter as a powerhouse of soul and a feminist icon. Opening with a cover of Otis Redding’s “Respect” – initially a song about a man who feels mistreated by a woman he provides for – Franklin turns the song into an anthem of female empowerment, adding the iconic “R-E-S-P-E-C-T” chorus into the mix.

Like the rest of the album, “Respect” packs a punch. While it’s the song you’re most likely remember, “I Never Loved a Man (The Way I Love You)” is the one you’ll keep coming back for. Franklin trashes her no-good, lying, cheating heartbreaker of a man, while asserting her prerogative to love him rather than leave him.

The album is masterwork and a declaration of independence, combining top class vocals with personal hopes and fears, striving for cultural change. As Franklin puts it, “They say that it's a man's world / But you can't prove that by me.”

David Bowie’s final album was initially received quizzically by reviewers, who called it cryptic and lyrically inscrutable. Two days later, Bowie’s death changed everything. Suddenly, lyrics like “Look up here, I’m in heaven” and “I’m dying to / Push their backs against the grain” resonated with a profound sense of hope, desperation and loss.

Bristling with veracity and wit, Blackstar (★) gives a thin white middle-finger to the cancer that killed him. Lyrically, the album keeps you guessing. Bowie’s experimental blend of jazz and rock eclipsed his comeback album The Next Day, both in style and substance.

Backed by fragmented synths and Donny McCaslin’s wailing sax part, Bowie’s gasping vocals follow hard on the heels of whip-cracking snares, driving headlong through tracks like “‘Tis Pity She’s A Whore” and “Sue (Or In a Season of Crime)”. Elsewhere, “Girl Loves Me” offers little respite, with its Clockwork Orange lyrics and trudging, synthetic bass line.

Blackstar was a cultural event. Not only did it top the 2016 charts but it brought about a revived interest in vinyl – largely thanks to Jonathan Barnbrook’s ‘secret’ designs – selling more than Adele’s 25, the biggest-seller of the previous year. In the words of Bowie’s long-time producer Tony Visconti: “His death was no different from his life – a work of art.”

OK, this one’s for me… “Did you know that Whitney Houston’s debut LP – called simply, Whitney Houston – had four number-one singles on it?” In the film American Psycho, Patrick Bateman’s encyclopaedic knowledge of pop music belies the serial killer’s ability to connect with people.

Released on Valentine’s Day, Whitney Houston’s 1985 solo album debuts a versatile mix of R&B, soul and pop anthems. It’s remarkable that the model-turned-superstar, later nicknamed The Voice, delivered performances of such maturity and range for her first outing, featuring knock-out tunes such as “Saving All My Love for You” and “How Will I Know”.

Contrary to American Psycho, it was Houston’s second album Whitney (1987), and not her first, which earned her four number-one singles. Her debut only earned her three – but let’s not lose our heads over it. 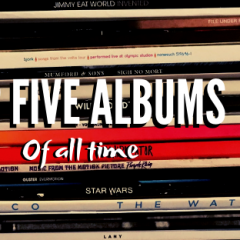 Top five albums of all time