Voice has been exceptionally proud of our status as the official Youth Media Partner to Brighton Fringe.

It has also been our absolute delight to be officiator for Voice Mag's Best Newcomer to Brighton Fringe 2017. We had a deluge of applicants and whittling down a longlist from all the fantastic looking shows was challenge enough. But that was nothing compared to coming up with the final shortlist.

However, it is with great joy that we can finally announce the shortlist for our Best Newcomer to Brighton Fringe 2017 award!

They are listed in no particular order, and a huge congratulations to everyone on this list!

The Ruffian on the Stair by Joe Orton - Blue Devil Theatre

It was a particularly fitting time to perform this often underrated Orton play. Not only was it 50 years since it first was staged at the Royal court Theatre, but it has also been 50 years since the decriminalisation of homosexually in the UK, and the murder of Orton at the hand of his boyfriend.

With exceptional acting, a simple but considered stage dressing, and the overarching historical poignancy, The Ruffian on the Stair earned its place on the list.

The Tale of the Cockatrice - Mumblecrust Theatre

"Deep in the vaults of an ancient priory, a hideous creature awakens…."

Mumblecrust Theatre brings a little-known British folklore legend to the stage in an hour of charming and delightful acting, singing and puppetry. Children and adults alike were sat captivated as the story unfolded, and found it impossible not to love the vibrant, charismatic but muddle-headed storytellers as they spun the tale of the terrifying beast, and the adorable nun who is tasked with saving the day.

The play was sincere, funny and inventive, and, with just a dab of social commentary, is a genuine work of art.

Inspired by her recent divorce, Susan Earl has created an "ingenious one-woman show" that offers observational comedy, musical numbers and character based humour.

Coming across as sincere, honest and relatable (apart from when she is in character) Susan Earl drew attention to the ridiculous expectations society imposes on everyone, with razor wit and a big dollop of satire - all while weaving in helpful life lessons!

"A near perfect piece"

But the show is about something, as well as being highly entertaining. The show is billed as being about friendship. Our three clowns are leery strangers at the start and pally chums by the end. But on the way there they have to deal with the things which get in the way of genuine communication.

"Of all the children's show I saw at this year's fringe I found this one the most original and the funniest."

Kid's with beards managed to blow our reviewer away with their well polished sketch comedy. Admitting she has limited experience with the genre, Fandango has made her "desperate to see more".

Appealing to every single person in the audience through a variety of jokes, and not a single sketch that fell short, Kids with Beards had everybody constantly laughing, and there was even audience participation!

"Witty, clever, and a work of genius"

Jon Gracey, however, has demonstrated unequivocally that the genre has great promise with Werewolf: Live, a card game that pits audience members against each other in a race to kill the werewolves.

Wth Gracey acting 'dungeon master', injecting humour and dry witticisms to the events that unfold in front of us, Werewolf: Live was an unexpected hit that left the reviewer desperate to see this type of show expand further. 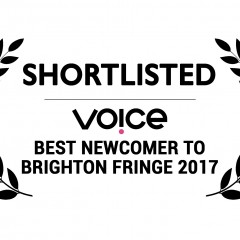