For the past fifteen years, StoneCrabs Theatre has been running a yearly programme offering free training to new and emerging directors. It has provided essential experience to a number of successful directors including Lynette Linton (Artistic Director of the Bush Theatre), Tristan Fynn-Aiduenu (2019 JMK winner) and Bola Agbaje (2008 Olivier Award winner).

This year the StoneCrabs Young Directors cohort present Playdoh: The Things That Shape Us, a week-long festival at Southwark Playhouse and online showcasing the talent of nine brave and exciting new directors through the themes of identity, roots, confinement, language and politics.

Across five nights, each director will present a short play that represents both the world they live in today and the things that have shaped them along the way. The Festival include plays by Sabrina Mahfouz, Silvia Gomez and Thomas Eccleshare, presenting an eclectic mix of productions that echo the values of the training programme – equality, diversity and creation.

“The future of theatre relies on today’s generation having the opportunities and support to go forward and create. Over the past 18 months the arts industries have been particularly hard-hit and so it is more essential than ever to provide free training to young artists in the industry. We are thrilled to be continuing to support the next generation of theatremakers and showcasing the incredible work of these nine young directors.”

Cooking to heal the wounds of the soul.

House explores the essence of family, religion, sisterhood and truth.

9.10pm: The Sky Five Minutes Before the Storm by Silvia Gomez, directed by Catharina

A nurse and a patient receive a life-changing visit.

9.10pm: The Arsonists by Max Frisch, directed by Miranda Mackay.

There’s a stranger at the door. Can you smell smoke?

A personal game between opposites to solve the mystery of consciousness.

Lovers confront the altered value of language when words are scarce.

One womxn’s plight to live authentically, but at what cost?

9.10pm: With A Little Bit Of Luck by Sabrina Mahfouz, directed by Simonne Mason.

Please note, all productions will also be live-streamed, excluding Heather by Thomas Eccleshare. 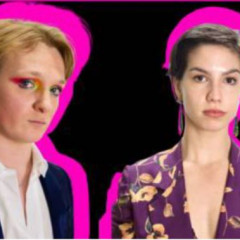 StoneCrabs Theatre presents Playdoh: The Things That Shape Us