Fast-paced, thrilling verse play about marriage and political upheaval, told in blistering verse by one of the UK’s most celebrated poets. The third and final instalment of Fringe First and Stage Award winner Luke Wright’s trilogy.

Fast-paced, thrilling verse play about marriage and political upheaval, told in blistering verse by one of the UK’s most celebrated poets. ‘Cool poems’Patti Smith ‘A poet for our day’ The Guardian

The Remains of Logan Dankworth is the third and final instalment of Fringe First and Stage Award winner Luke Wright’s trilogy of political verse plays. It looks at trust and privilege in the age of Brexit.

Logan Dankworth, newspaper columnist and Twitter warrior, grew up romanticising the political turmoil of the 1980s. Now, as the EU Referendum looms he is determined to be right there in the fray of the biggest political battle for years. Meanwhile, Logan’s wife Megan wants to leave London to find a place to better raise their daughter. As tensions mount at home and across the nation, something is set to be lost forever. This gut wrenching and exhilarating slice of new writing won the 2020 Saboteur Award for Best Show with Luke winning Best Performer in 2021.

The first two plays in the trilogy, What I Learned from Johnny Bevan and Frankie Vah, won praise from Fringe and UK-wide critics and audiences alike for their ‘mature, lyrical and politically relevant poetic writing’ (Exeunt), laced with wit, compassion and laser precision. See an introductory trailer here https://www.youtube.com/shorts/OEcE8EoGy4A

Luke said ‘The Remains of Logan Dankworth is the most complex and mature thing I’ve written so far. As with my earlier plays there is a personal story occurring against the backdrop of political upheaval. Previously I’ve dealt with Thatcherism and the legacy of New Labour, this is bang up to date and features a man approaching middle age excited by the febrile nature of British politics while trying to hold things together at home.’

Luke Wright is a poet and theatre maker who has been writing and performing his work for over 20 years, touring all over the world. He is acknowledged as one of Britain’s top stand-up poets and one of the principle architects of the now thriving spoken word scene.

Flamboyant, political and riotously funny, Luke’s published work includes four full collections, three pamphlets and his three verse plays. He is the winner of a Fringe First, a Stage Award for acting excellence and two Saboteur Awards. The Remains of Logan Dankworth is published in book form by Penned in the Margins.

The Remains of Logan Dankworth was co-commissioned by Norwich Arts Centre, National Centre for Writing, Colchester Arts Centre, and Freedom Festival. It is written & performed by Luke Wright, directed by Alex Thorpe who also has three Royal Shakespeare Company productions under his belt. Music for the show was written and performed by musician and writer Polly Wright with dramaturgy by Sarah Dickenson and lighting design by Joe Price. 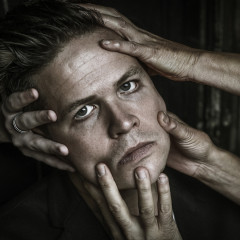 Fast-paced, thrilling verse play about marriage and political upheaval, told in blistering verse by one of the UK’s most celebrated poets. The third and final instalment of Fringe First and Stage Award winner Luke Wright’s trilogy.