Ok Dan, describe what you did for the Silver Arts Award

So, for my Silver Arts Award, part one, I had to give myself an arts challenge – something that was going to challenge me and I decided to pick a grade 8 piece of music that I was going to learn to play for the Selby High School Talent Show. I had to plan this out over a series of weeks and I've kept a diary, that's in my folder. I then had to do it and I had to review my overall feelings and how I thought it'd gone.

I then had to review some arts events in the local area, so I reviewed an up-and-coming rock band who were playing at school. I reviewed a folk group and I also reviewed an art exhibition at York Art Gallery about World War One so it was in my field of interest. And then, for the rest of part one, I had to research some arts career paths: things like session musicians and things that you can do in music and that was really good for me because it taught me things about careers and what I might do as a potential job.

How did you go about capturing your evidence?

So, to capture my evidence, I have produced a portfolio of evidence, which was really good because it's allowed me to keep all my things in check. It's really clean-cut and coherent and it allows me to present my evidence in a good way as well.

What did you enjoy the most when you did the Arts Award?

The thing I enjoyed the most; I really enjoyed playing at the talent show because it was the first time I'd really played in front of a large audience before and it was really good to share my arts skill with other people and it was a real surprise coming second.

What opportunities did the Arts Award present to you that, perhaps, you might not have had?

I got a chance to audition for the National Youth Folk Ensemble, which was a really good opportunity for me because I've never done anything like that before. I got to play with a lot of professional musicians and it gave us the chance to make some really cool music.

Which part of the Arts Award did you find most challenging?

I found the leadership in part two really challenging because I've never really done anything like that before. I've done quite a lot of presentation but I've never really had chance to lead a group and a lot of people there were older than me so I had to build rapport within the group so I was listened to. And there's also quite a lot of younger ones there where I had to keep their attention and, sometimes, you found they'd be messing about so I'd have to sort of straighten them up. But also doing it in a way that was clear to them but not being too harsh and it's really taught me communication skills and how to work with other people. 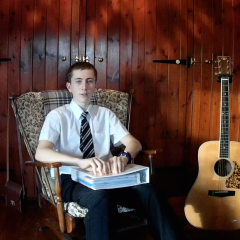