“To see children achieve in different ways – where it’s not scripted, and you can see their natural intellect and ability shine – is so powerful.”

Peter Barrett and Lorraine Smith were two people well into their careers as educators. Peter, a specialist computing teacher, and Lorraine, a specialist in integrating technology into the curriculum, always looked for new ways to help children channel their creativity. Having known each other for a while, it was at Burnt Oak Junior School in Sidcup where the two of them embarked on a journey that would change the course of their careers and bring a brilliant new opportunity to the children fortunate enough to work with them.

How it all began?

In 2018, Lorraine, then working as a dedicated TA, proposed a school print newspaper. Due to a lack of funding, Lorraine was given the go-ahead but was told it could only exist online. Not one to let the education sector's continued diminished funding stand in her way, Lorraine decided that, in fact, that would actually give her and the students who signed up more creative freedom – something many of us learnt in lockdown.

Here, the Burnt Oak Buzz was born, and Lorraine was working with 16 eager students producing all of the content themselves, whilst Lorraine single-handedly put it all together. However, “16 students soon became 40, and 40 became 50.”

“It took me hours [to put it all together], I loved doing it, but I also knew the children could do it [themselves].” 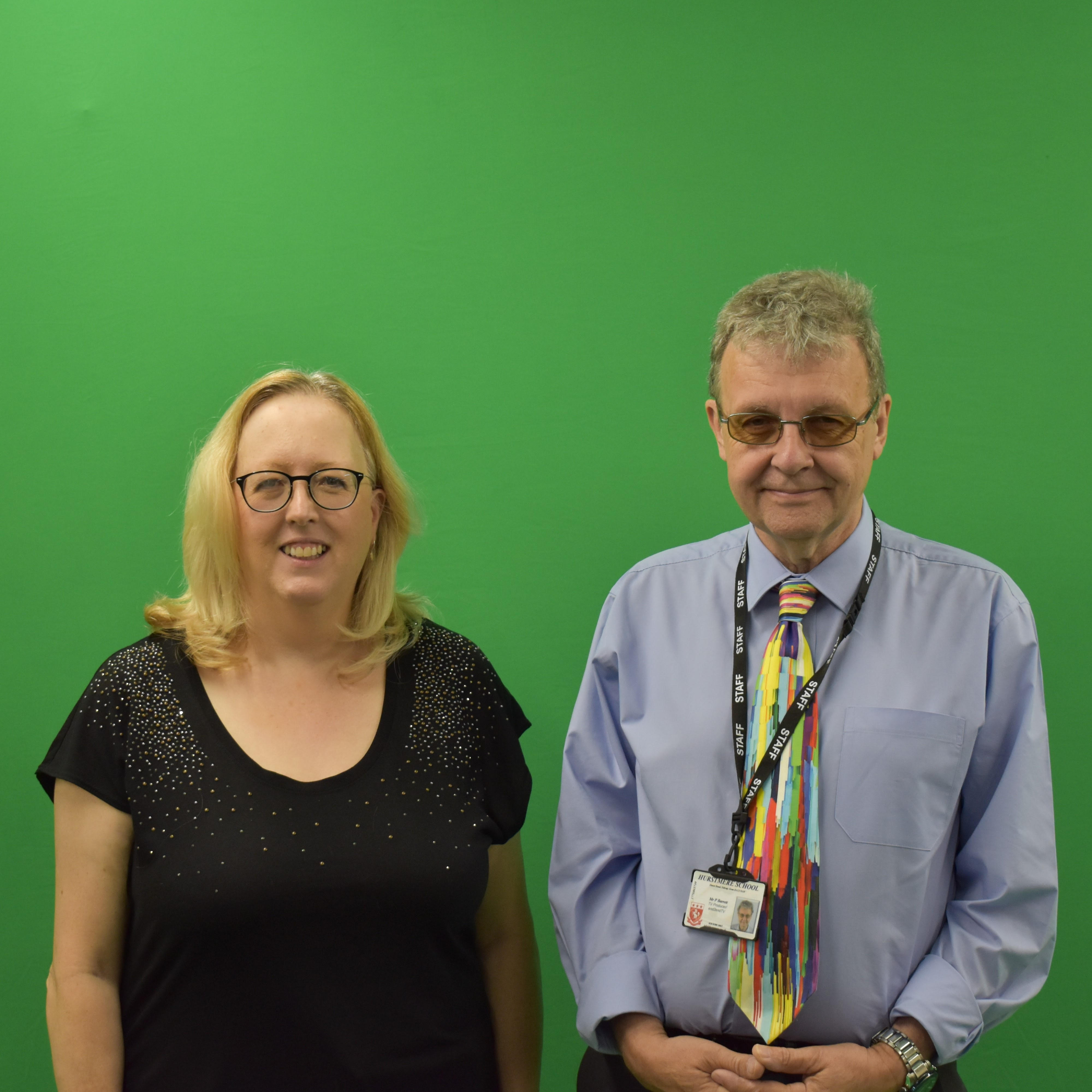 Putting total faith in the students, Lorraine turned her attention to fundraising – a smart move on Lorraine’s part, considering that the size of the online newspaper continued to grow and showed little sign of slowing down.

What Lorraine was providing was a welcome addition to the traditional curriculum that allowed the students total creative freedom. With funding the way it is in the educational sector, it’s fair to say it’s a rarity not to have projects like this stunted or disbanded altogether because of its absence.

Having included a film and TV element into every issue of the Burnt Oak Buzz, it made sense to add a media crew to the team. With his specialist background in film and editing, Peter was the perfect person for Lorraine to approach to help set this up. Having also made it his mission to show students as young as year three skills that many would have to wait until college to learn, it’s no surprise he said yes.

“It was about giving the children a voice.”

Once they had organised their media crew, splitting it up by interest, content, vision and sound, Lorraine’s and Peter’s crew grew even more. Going to car boot sales and frequenting eBay for the best deals on equipment, Lorraine and Peter were self-funding the entire club and spreading the word to bring their students some real-world experience. This endeavour allowed some of the Burnt Oak Buzz Reporters to meet Nicky Cox, Editor-in-Chief of national newspaper First News and experience First News rolling off the press.

Just when things were going well, enter lockdown number one.

How the pandemic changed things

With schools shut, Lorraine and Peter reached a crossroads. However, they were determined to do what they could to help students keep their creativity alive. So, Lorraine and Peter utilised the extra time everyone had on their hands to create Newsround; an online news programme that resulted in the pair winning an award: First News Newspaper of the Year for Innovative News Projects. A welcome form of recognition for their and their student's efforts, especially considering Lorraine was asked to pause the Burnt Oak Buzz during the pandemic in an attempt to help the children focus on their traditional learning.

As many realised, once the devastation of Covid-19 had settled, there were some silver linings. Once Lorraine and Peter returned to school, despite how everything had changed, they soon realised the skills they had taught their students had been remembered brilliantly. Their enthusiasm for real-life film shoots stood out when the media crew (then Y6) filmed the Christmas Production class by class in their Covid-19 secure studio & control room - loving working in real-life TV Production roles.

Considering the interest they had got so far and the fact they self-funded everything themselves, it was January 2021 when Lorraine and Peter decided they were going to set up their company, end2end TV CIC.

“Children can do so much if you allow them the place to think creatively instead of just telling them what to do.”

What Lorraine and Peter have done is create their own TV Production Company. They started by offering a scholarship to the media crew, which included developing their media skills to an advanced level and working towards a Bronze Arts Award in the process. With the students, they had previously taught and their parents on board, it wasn’t long before Lorraine’s and Peter’s creation took off.

Crewed entirely by young people, self-funded and teaching all kinds of theoretical and practical skills, they have taken their initial idea to a whole new level. Week by week, they present the students with new challenges, problem-solving, troubleshooting and exercises to demonstrate teamwork.

One thing Lorraine and Peter have made clear is their passion for skill-sharing and encouraging their children to share their skills with others as part of the fabric of what they do.

“We want the skills within e2e to cascade to other young people to give them opportunities, but also we try to embed learning and facilitate work experience by giving them the opportunity to participate in professional shoots.”

In February 2022, Lorraine and Peter had enough self-motivation and resources (or ways of getting them) to resign from their jobs and make this work for them full-time.

Since going solo, they have acquired patrons who see their vision and support their work like Jay Clarke, Aardman Animations & Walt Disney storyboard artist, Mark Reid, Head of Education at the BFI, and Natalia Cohen, world record holder and inspirational speaker.

end2end TV CIC is also an Arts Award centre; Lorraine and Peter support all the students in completing their Arts Award, pushing their skills and allowing the children to make their own decisions. The students don’t only learn new things themselves by being immersed in real-life roles and getting hands-on with professional equipment, but they also share those skills working with other schools in and around the community. All their e2e Crew have successfully completed their Bronze Arts Award and are currently working on achieving their Silver. Many children they have worked with in clubs and workshops have achieved a Discover Award and are now completing their Explore level. Older crew member Dan is currently working on his Gold!

As proud as they are of their e2e students, I think it’s fair to say they are equally proud of ‘OBU’ – their outside broadcast unit that Peter said, “was instantly useful.”

Since acquiring OBU, they have added another dimension to their skill set. The e2e crew live-streamed charity bike ride Tour de Bexley, where they practised and learned interviewing skills in a real-life setting, which comes with real-life experience working in the media industry. An invaluable experience that any young person considering pursuing a career in media would greatly benefit from.

e2e has also collaborated with the British Film Institute [BFI]. What started as a great opportunity for the e2e crew to live-stream one of the BFI’s conferences led them to meet the Saturday mini filmmakers club in January. Then they ran a three-day workshop in partnership with the BFI for young filmmakers the following month.

“It was a fantastic opportunity to partner with the British Film Institute and create their first ever course on ‘live’ TV Production. The feedback was brilliant!”

Collaborations like e2e and the BFI are vital in the ongoing progression of projects like e2e to enhance further the working skills needed to give the student that invaluable experience. Having those working in the industry share their skills and career experience with young people gives them more of a sense of what it’s like to be a working creative.

The e2e students are of all mixed abilities and from different backgrounds. Sitting down with ten students on Zoom, they expressed their favourite things about working with e2e and how they think it has helped them develop. Watch the interview here:

end2end TV is a great example of how creativity in learning is an invaluable resource that, when nurtured, can result in developing a useful skillset beyond traditional learning. The work e2e has inducted in its students has provided them with many transferrable skills and experience reminiscent of on-the-job training – something they can carry with them throughout their academic and creative careers. Schools should not be deprived of providing this for their students because funding does not permit them the time or resources to do so, but sadly, for many schools, this is the reality. Not every school has a Lorraine or Peter who are willing to self-fund projects that have proven to engage students in this innovative way. But, let us hope that Lorraine and Peter can carry on inspiring young people who work with end2end TV, and perhaps inspire others too so that students everywhere get a chance to push themselves in new, exciting and creative ways.

end2end TV is an independent not-for-profit TV Production Company. From September 2022, end2end TV has a production control room and multi-camera green screen studio based at Hurstmere Secondary School in Sidcup, Kent. They enjoy running TV and film production courses for young people and specialise in programme making. You can find them here.

“To see children achieve in different ways – where it’s not scripted, and you can see their natural intellect and ability shine – is so powerful.”