The Norwich-based art-pop duo Let’s Eat Grandma have returned, three years after the release of their last full-length album, I’m All Ears, with a new single named Hall of Mirrors. The track continues with Let’s Eat Grandma’s now trademark ethereal and wavy sound, abundant with pulsating and rolling synths and a danceable disco-esque beat that pleasantly demonstrate the band’s maturity and growth as musicians over the past few years. The girls have been in the limelight since the age of 14, and are putting their wealth of experience to good use. The song isn’t necessarily catchy, but manages to convey a sonic landscape that is captivating, whilst lyrically delving into a poetic introspection that showcases thought provoking relatability and clever metaphor.

One of the rising stars of the UK’s hip-hop scene is Pa Salieu, and this week he has released his latest EP, Afrikan Rebel. The EP features three tracks, including the song Shining, featuring artists Tay Iwar and Zlatan. The track is lively, and is made to be played at a rave or in a club setting, but also implements r&b elements alongside classical instrumentation. The sheer energy that Pa Salieu brings to his performance is astonishing, and demonstrates the drive of a man who has his eyes set on success. The song is completely individual too, Pa Salieu has managed to find his own unique voice and sound within UK hip-hop and Ampiano — the South African genre of house that Pa Salieu is influenced by, giving him a sound that is built to be performed loud and proud. The rapper’s vocal chops are superb too, with an unconventional delivery that compliments his beat expertly, not to mention the fact that Salieu is shining a light on other musicians within his style with his features.

Probably the biggest breakout star of all time, Lil Nas X has finally released his much awaited debut album MONTERO, featuring a few of the singles that have dominated the popular music scene over the past year, alongside a myriad of new songs that, when compiled, creates one of the most progressive and multi-faceted pop records from a current artist. Nas X is unafraid to delve into emotion on the album, even incorporating tracks that give a pop-punk flare, amongst the harder hitting rap tracks like INDUSTRY BABY. The track LOST IN THE CITADEL demonstrates the artist’s rock capability, as Lil Nas X sings a ballad in an indie fashion akin to something from the 1975, a welcome change that helps to diversify his sound and proves his capability to create the unexpected. Seeing Lil Nas X evolve into one of the most important pop stars of a generation has been a rollercoaster; he is unashamed and unapologetic as he subverts cultural norms and champions the LGBTQ scene. It is commendable that even with so many eyes on him, the musician is still attempting to not only push his own boundaries artistically, but do it in a project that is impeccably produced, profoundly personal and utterly powerful.

A pioneer of electronic music, Amon Tobin is cut from the same ilk as experimental IDM artists like Aphex Twin or Autechre. The artist has released many outstanding projects in his long career, and his most recent record, How Do You Live is no exception to that trend. Phaedra is the lead single on the record, a soundscape style track that is completely instrumental, and is layered with multiple sonic components that sound almost alien and very industrial. The track is not in any way abrasive despite its cacophonous nature, and is remarkably relaxed compared to the sounds that are exhibited. This creates a unique dichotomy of the strange and beautiful, one that encapsulates the trance-like state found in techno music, but subverts the monotony with hap-hazard injections of noise and fuzz that intrigue thoroughly. The track is expression at its finest, and the sound stage that Tobin can produce is second to none. There is a definite reason why the musician is lauded as a producer’s producer, and tracks like Phaedra demonstrate his professionalism and his experience within the avant garde electronic landscape.

Alternative rock and neo-psychedelic band Mild High Club released their newest record, Going Going Gone this week. The band showcase their indie rock sound in a jazzy fashion, implementing interestingly sporadic production elements throughout too. It’s Over Again is a standout track on the record, one that demonstrates the band’s creative flair in a production sense, enveloping their usual psychedelic sound with flowing piano passages, gating effects and echoed, panning vocals. The song is quite short though, only filling just over two minutes of the record’s run-time. The band seem to have released one of their most political albums to date, lyrically describing the state of the capitalist world we live in, but this sentiment can get lost with the sheer amount going on throughout each track. It is hard to not think that if the band had subtracted some of the many layers that they have created, the track would be able to breathe a little more, allowing for a proper digestion of its themes. Nevertheless, the songs on Going Going Gone are enjoyable, and It’s Over Again is a testament to that.

All of these tracks, as well as those from past weeks, are also available to check out on our New Music Friday playlist, found here. 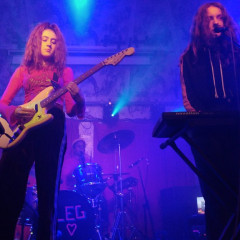