How Covid has made socialising feel like a chore

Pop psychology recently coined the phrase ‘social hangover’ to help define the feeling of exhaustion from excess socialising. Since bars, restaurants, theatres, and clubs have reopened, the task of readjusting to life on the outside of lockdown has been thrust upon us all. And, for many of us, that adjustment has not come without its obstacles.

Consider a typical weekend back in April 2020. You would awake as late as possible, desperately trying to pass the day in a blissfully timeless slumber. Perhaps a Netflix programme would occupy you for an hour before you could pull yourself out of bed. Lunch was as long an affair as possible, followed by a lengthy walk and maybe a Zoom call with a friend. Then, bed, before the whole process repeated itself the day after.

Next, consider a typical weekend in August 2021. Brunch, a packed train, a heaving cinema auditorium, drinks, coffees, clubbing, more. The two scenarios are worlds apart, certainly more progress than you would expect from eighteen months worth of social development.

And that’s disregarding the flip-flopping between lockdowns we have all had to suffer through. So it’s no surprise that our brains have been struggling to cope with it all.

“Socialising is cognitively taxing. Most of the time we're all socialising a bit and thanks to repetition this means we find it pretty easy. However, we're all out of practice now, so when we socialise we're noticing how much cognitive energy it uses,” says psychotherapist Jack Worthy.

Social hangovers can also leave you with an anti-climatic feeling after months of being desperate to go out. They can ironically therefore increase the sensation of isolation, especially with social media brazenly declaring how much more fun than you everyone else is having.

And loneliness has been at the forefront of mental health discussions during the pandemic. Douglas Nemecek, chief medical officer for behavioural health at Cigna, argues, “Loneliness has the same impact on mortality as smoking 15 cigarettes a day, making it even more dangerous than obesity.”

So it would seem that there is no way to win. Yet Worthy argues that “It's probably necessary to push yourself a little bit for a while”. “There's going to be a bit of a temptation to be avoidant.”

Perhaps the solution is to gradually try to readjust to the social life we were once so used to. Perhaps the sudden rule change of July 19th was too sudden for us to follow with pure abandon.

And yet it is still important to recognise the difference between having a touch of pop-psychology social hangover and between having more permanent social anxiety symptoms. Even actress Joey King has opened up about her difficulties with mental health in lieu of the pandemic, urging us all to find coping mechanisms to get us through this still-difficult time.

Her main message seems to urge us not to put pressure on ourselves. To move at our own pace. Socialising, like drinking, seems to be much healthier in moderation.

So while this summer seems a time for both, we must ensure social media satisfaction doesn’t come at the cost of a more genuine happiness within. 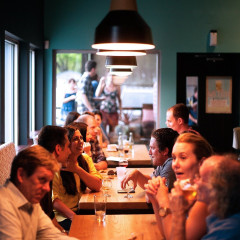 A ‘social hangover’: Why it's ok to be exhausted by socialising

How Covid has made socialising feel like a chore