Ancient Greece is the birthplace of everything we know and understand about theatre. Its origins are up for debate, but two ideas are widely agreed as the most likely.

The first is poetry. It is thought that poetry developed into ‘theatre’ during the 6th Century BC. Playwrights such as Aeschylus added a second person to the stage to engage in a dynamic conversation, the likes of which the world had never seen. Philosopher and playwright Sophocles added a third actor, as well as painted scenery. Euripides was known for his clever dialogue, challenging the audience with thought-provoking questions through his writing.

The second idea links the development of theatre to the ancient Festival of Dionysos. This was a theatrical event where the people of Athens would worship Dionysos, God of wine, theatre, and ritual madness. At this festival, emerging playwrights would compete against each other, staging their plays one after another for the audience of festival-goers. At the end of the performances, a jury would vote on the best play. The reward, honour and glory; for people of the theatre, materialistic awards were not on the agenda. The winning playwright’s name would be carved into the pillars of the theatre.

We are lucky that so many ancient Greek texts have survived, and from what we can draw from studying them, it seems that both poetry and ritual had their influence on the origin of theatre in equal measure.

The plays were performed in an open-air theatre, a raised platform for the stage, surrounded by a semi-circle stone auditorium, rising up the hillside. This allowed the stage to extend into the audience to some degree. One of the most important things about Greek Theatre that helped it to develop and flourish was its interactive nature, allowing the audience to immerse themselves in the drama. The oldest theatre that has survived from Ancient Greece is the aptly named Dionysos Eleuthereus, which was built in Athens in the 6th Century BC. The nature of this stage allowed for a big audience, all with the optimum view of the players. There are many modern theatres that have been built specifically from the ancient model, notably the Olivier theatre in London. The scale of this shape of stage is variable, from an intimate setting to large-scale production.

The chorus is part of Ancient Greek theatre that hasn’t really translated across to modern theatre in the same way, but at the time it was one of the most important parts of the entire event.

The chorus was a group of up to 50 performers (most likely all male), who would offer perspective and commentary on the events of the play in the form of singing and dancing. Our only modern equivalent to the Ancient Greek Chorus is the ensemble in musical theatre. It is a broad stretch, but this comparison is made to show that there was a lot of skill involved in being a member of the chorus, and also to indicate its importance in storytelling rather than as an interlude.

The chorus had two main purposes: The first, to provide comic relief, creating an interactive atmosphere with the audience through their singing and dancing. The second, to offer the perspective of the community in regards to the events of the play. Whereas modern theatre focuses mainly on the perspective of the principal, or certainly speaking, characters, the chorus was an integral part of representing the community.

Much of what we can visualise of Ancient Greek theatre comes from paintings, architecture and figurines. Masks were another element of the theatre that has several purposes. It is thought that their roles in ancient rituals, where people would use masks to dress as Gods in worship, is what carried them to the stage. Originally, the wearing of masks to embody Gods was probably only permitted for priests. In the theatre, it was the leading member of the chorus who would take on the wearing of masks. This innovation was credited to Thespis, giving us the term ‘Thespian’ in reference to theatre performers.

The other role of the masks was to allow the same performers to change character quickly and easily. Elaborate costumes would have been too time-consuming for actors taking on several roles, so masks were a good way to switch from character to character. Masks were particularly popular in comedies, as the melodramatic and distorted faces created caricatures, inviting laughter and ridicule towards comical or evil characters from the audience.

The Tragedy is probably the first genre that would come to mind when one thinks of Ancient Greek Theatre; the genre is filled with feuds, affairs, incest, fate, death and executions – things we would associate with the dark days of ancient times. Much of the plays’ material comes from Greek mythology and religion. Some plays make their way down family trees, depicting the trials and tribulations that they face. A famous example of this is the play of Oedipus, the man who sealed his fate while trying to run from it. The three Theban plays by Sophocles explore the story of Oedipus’ parents, his own tragic prophecy, and finally the journey of his daughters after his death. In many of the iconic greek plays, family drama is at the centre of their content, which, ultimately, is probably what has allowed them to survive and be recreated over and over.

The Greek Comedy was, as the name suggests, the light relief after the tragedy plays had taken their course on the stage at the festival of Dionysos. It was thought by the ancient Greeks that actors and playwrights could not thrive in both comedy and tragedy, and should dedicate their energy to one respective genre. Aristophanes, for example, was one of the iconic comedy playwrights at the time. This idea can be seen in our world today, when we see certain actors thrive in comedy, sci-fi dramas or romance respectively, with a select few being able to transcend genres.

We get an idea of the type of content that was explored in the ancient greek comedies from decorative pottery which depicted the actors dancing around dressed as animals, among other characters. These items would be sold during the festival, almost like souvenirs that we have in gift shops today.

The Satyr drama however is a lesser-known genre and is effectively a branch of comedy. Satyr dramas were a spectacle of performers dressing as mythical creatures. The most famous example of these creatures is the cyclops from the Odyssey, one of the only surviving Satyr dramas. All the dressing up and dancing around was a clever masquerade for the play’s ridiculing of people in power and criticising the flaws of their own society. It was an interactive genre where the role of the chorus flourished, but the humour was seen as vulgar and wasn’t valued by scholars of the time. It is probably this genre that characterised the excitement and atmosphere of the festival of Dionysos itself.

Thanks to the festival of Dionysos and the growing popularity of theatre, new playwrights were emerging all the time, creating demand for more performers and travelling troupes. The rest, as they say, is history, and the influence of Ancient Greek theatre has certainly stayed at the forefront of other forms of entertainment today. As was suggested by Professor Alan Sommerstein at the University of Nottingham, there are notable modern TV shows that we watch today, made in the spirit of the ancient greek genre. The first is The Simpsons, reminiscent of the Satyr Drama. Its commentary and criticism of society, masked adult humour, and clever jokes are a staple of its preceding Satyr Dramas. Another, The Muppet Show, draws its influence from the fantastical elements of the comedy and satyr genres. “Nobody since Aristophanes, for example”, says Sommerstein, “could have thought of creating a chorus consisting entirely of vegetables.”

It was the popularity of the theatre that allowed the art form to flourish, so much so that the Ancient Greeks’ entire concept of theatre has stayed almost the same over two thousand years later. 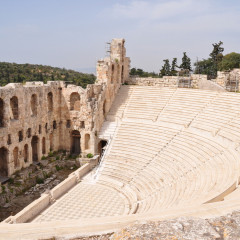