I'm currently working as a lighting designer for a placement at college. Having never done a lighting design before, I am totally out of my comfort zone. I knew this would be the case technically when I applied for the role. The kit I would be using I only had a basic knowledge of, and the computer software I had only opened once before. Therefore, it wasn't surprising this aspect of the placement was somewhat daunting. What did surprised me however was how terrifying it was creatively.

Normally, I would describe myself as creative. I studied fine art at A Level and I really enjoy dong crafts in my spare time. However, this placement has made me reflect on how, even with my A Level course and these personal projects, I have always felt insecure about the work I was generating, feeling both desperate to get others advice, opinion, and approval, while not wanting them to even glance at what I'm doing because I don't feel like it's of a high enough quality. On the rare occasion I am cautiously pleased with my work, I am still fearful my pride is wrongly placed. This fear has stopped me even attempting creative projects in the past.

The severity of these feelings has only just dawned on me. I had to walk into the first day of rehearsal and introduce myself as a lighting designer – I felt like a fraud. "I'm not a lighting designer – in fact I'm not a designer of any sort!" It became a matter of 'fake it till you make it', but I still struggled with that.

I consider myself a shy person, and definitely wouldn't say I ever have had an amazing amount of confidence in my own ideas, even when others tell me I should. This character trait proved particularly challenging while doing this lighting design because I was working as part of a creative team, with others who were much more experienced than me. Our sound designer was a professional, hired by the college rather than being one of my peers, as often it would have been. Our director, a fantastic woman who has directed at college before as well as directing many other impressive professional productions. It's amazing to be part of such a talented team, but it's also incredibly intimidating. After the first week of rehearsals I had a meeting with my director. I began by asking her how she wanted to start the conversation; did she want to tell me what she wanted for the show's lighting, or did she want me to share my ideas with her first.

"I'd like to hear what you're thinking. I'm not a lighting designer."

I was so close to responding with "Well, nor am I" before I remembered that, actually, as far as she was concerned, I was. I had creative responsibility for how this show would be lit. That moment was terrifying for me.

I'm sure many of the most successful designs began as something that sounded total ridiculous in theory, but working with such an impressive team, the fear of making a suggestion that was entirely obtuse, and being frowned upon and demonstrating my inexperience, was prominent. The process was hard. But theatre is about collaborating. For there to be collaboration everyone in the room needs to have to confidence, and be encouraged, to throw their ideas out there – so what if 99% of them don't get used and ARE pretty ridiculous. The joy is when one of those ridiculous ideas starts a conversation.

….that's when ideas start bouncing off each other and reacting to create something far more incredible than one head could develop on its own – even if that head has more experience than everyone else in the room. Everyone's ideas count.

And 5 week on I've done it. I put some lanterns on a plan, we arrived at the venue, turned that plan into a reality, and now, I've lit a show. There are bits of it I really don't like, and definitely things I would have done differently if I were to do it all again. But. Importantly. There are moments in the show I'm really pleased with and proud of. And it's hard for me to say that. And it's even harder for me to take responsibility for those moments. I want to give the credit to the director for making certain suggestions, or my supervisor for giving me certain tips and advice and generally just being a complete blessing to me, supporting me throughout. I want to give credit to my team, who have all been invaluably helpful and supportive and have made suggestions and improvements to the design as well as rigging and focusing all the lanterns and making it possible on a practical level. But, I have to remind myself, I am the lighting designer for this show. It is my design. And I'm responsible for the good bits, and well as the not so good. (Even typing it now I don't trust it though…)

Being creative takes confidence. And I'm still trying to have that in my ideas. One of the main reasons I enjoyed sciences at school was because I could put every faith in my answer and I could prove it was right. Now I have to have that same amount of faith in myself and leave the outcome to others judgements – some of which will be positive and some negative and both are okay because everyone has an opinion. Including me. And mine is no less valid than anyone else's. 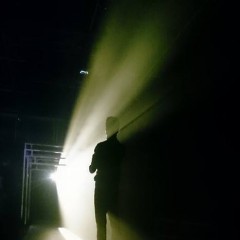