The duo certainly have the ambition needed to make it in the music industry, poetically declaring that the band was born ‘in a distant land kissed by the sun where mountains rose from the sea.’

This might not be the most accurate description of London, on whose busy streets band members Fran Sylver and Romi Alter met, but certainly speaks to an artistic vision that aims to transcend the airways and lay the foundations for a musical legend.

While a number of up-and-coming musicians might talk about their desire to land a record deal or launch into a Liam Gallagher-esque rock’n’roll swagger while advocating the appeal of fame, Adora’s ambitions seem more ethereal. Stating that their desire ‘to create a community of tolerant, open-minded people’ prompted them to embark on their musical journey, Sylver and Alter are proud to ‘have stood for inclusivity, fighting ‘for everyone’s right to not just survive, but to thrive.’

These socially-attuned statements aren’t just offhand attempts to appear progressive, however. The duo’s attitude and mission statement made its way into the lyrics of debut single ‘Anthem To The Youth’, without feeling corny or contrived.

“You’ve got to wear what you like / You won’t be thinking of style when you die” is the song’s smartest lyric, positioning itself as an ode to individuality while presenting a carpe diem message of living life to the full, which sounds almost prophetic in the markedly dire political landscape of the early 2020s.

Citing inspirations as diverse as classic rock, 80s disco, Latin instrumentation and glam, ‘Anthem To The Youth’ proves a strong bedrock on which to build an eclectic (an increasingly important trait in the culture of streaming and gender-bending) musical career.

An energetic, rallying cry to live in the present, ‘Anthem To The Youth’ owes a fair bit to retro rock, its Oasis-esque piano chord melody overlaid by Queen-indebted guitar, a high-octane dance drum loop and vocals that lean as much on the Willie Nile school of rock as they do punk and pop.

An appropriately urgent debut single, ‘Anthem To The Youth’ is a promising introduction to a refreshingly ambitious duo set to leave their mark on the UK’s musical landscape. With riffs this infectious and a message that’s likely to resonate with thousands of young music fans, Adora’s certainly an act to look out for.

‘Anthem To The Youth’ was released on Spotify on the 19th of February 2021.
Its music video was filmed by blogger and videographer The Unidentified Rocker. 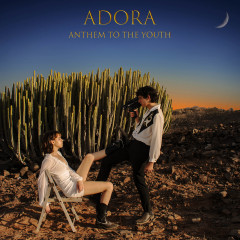