A brief look into the life and filmography of famous composer, singer, songwriter and actor Danny Elfman.

Danny Elfman is an American composer, singer, songwriter, record producer and actor known across genres though most widely recognised for his collaborative work with director Tim burton.

Elfman began gaining popularity as singer-songwriter for the new wave band Oingo Boingo in the early 1980s. When approached to score Tim Burton and Paul Reubens upcoming film ‘Pee-Wee’s big adventure’ in 1985 Elfman was apprehensive due to his lack of experience and training within the field of composing. Elfman however became more open to the idea once Burton accepted his initial demo’s and completed the score for the film. Hearing his music played by a full orchestra was described by Elfman as “one of the most thrilling experiences of his life”.

Following Pee-Wee’s, Elfman continued to score primarily quirky comedies throughout the 80’s, contributing to work with Burton. Elfman's influential 1989, Grammy-winning score for Burton's Batman marked a major stylistic shift to dark, densely orchestrated music in the romantic idiom as Elfman began to branch out of comedies. With Batman, Elfman firmly established a career-spanning relationship with Burton, scoring all but three of the director's major studio releases and providing the singing voice of Tim Burton's famous character Jack Skelington.

Having scored over 100 films and obtaining 4 Oscar nominations Elfman has certainly made a name for himself throughout Hollywood, gaining a cult following for his often dark and quirky sound.

Personally I adore Elfman’s work throughout his filmography, finding it fascinating to hear how he was so apprehensive to work on Pee-Wee’s, not knowing at the time where composing would take him.

His filmography spans so vast across a range of movies, it’s hard not to appreciate the influence he’s had on so many much loved classics.

Though not particularly skilled in music myself, the admiration I have for what composers do and how they use music to tell a narrative applies to Elfman in the highest degree.

The mini-documentary series ‘the movies that made us’ focuses on The nightmare before Christmas in one episode and to hear Elfman himself speak on the work he did and how much of himself he put into the character of Jack Skelington speaks to an audience on a human level.

Having such a portfolio of work behind him, it’s no wonder everyone both in Hollywood and throughout audiences know his name. 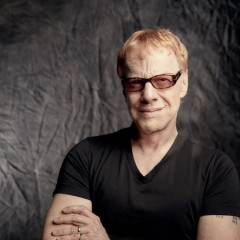 A brief look into the life and filmography of famous composer, singer, songwriter and actor Danny Elfman.