Voice MagBlogsHow to: Check your p…

To note: As a case in point, I wrote this article a few weeks back but after some valid criticisms from my editor my pride was hurt and I shelved it. The thing is this isn’t (and shouldn’t) be about my pride, this is about life and death. I’m sorry I lost sight of that and I will fight with those standing up against every injustice in any way I am needed.

The thing about privilege is that it's a very loaded word. People label others with it as almost a badge of shame or guilt, and some of the most privileged refuse to acknowledge it because of its connotations. But privilege isn’t some terrifying word, nor does it put you on the de facto list of bad people – it just means you got given a headstart in the race of life. It’s great news for you, but without acknowledging it you can do a lot more harm than good with the luck you’ve gained by being born in a sweet spot. The fact is that now more than ever those with privilege have a responsibility to use it to help balance out society, otherwise you are just as bad as those that perpetuate injustice.

Confused by what privilege is, or unsure as to whether you are? Allow me to use a simplified metaphor. You’re at school, lined up next to the starting line ready for the 100m sprint. Then, before they fire the starting gun, they ask anyone who’s white to take three steps forward. Men then get to go forwards two more, and those who have never gone to bed hungry a further three. If you live with both parents, take a step forward. If you go on holiday every year, another step for you, and if you don’t have any disabilities run on ahead three more spaces. It’s only once those starting positions have been adjusted that the race officials finally fire the starting gun, and inevitably the winners of the race all share similar characteristics, while those who never got the same advantages can never quite catch up and trail behind. It’s not because of anything they did, it’s because the system was skewed against them. That’s the systemic injustice we see in the world, and those of us with privilege are the ones that more often than not get to be that one step ahead just because of who and how we were born. That is not and will never be acceptable.

As someone who has a lot of privilege, the most important thing is using it to redress the balance. If you look at my Twitter then it's just full of me fighting whatever cesspool of intolerance Twitter is throwing at the world that day. Sometimes it's really hard, and as someone with a mental health issue it can take its toll, especially when they all gang up on you at once. But every time this happens I am CHOOSING to engage with them, when so many others have that hatred thrust upon them without warning and without choice.

It’s not that fun to be attacked on Twitter, but you know what really isn’t fun? Being choked to death by the very people who are meant to protect you whilst you are screaming out for air. Having a 12% chance of the police using violence against you despite you only making up 3.3% of the population. Being afraid to let your child out not because they might get a bit sunburnt, or that they will be late for tea, but because they might never come home. Because a police officer may just decide that your 12 year old son playing with his BB gun on a swing set in the park was a ‘guy with a pistol’, and despite suspecting it was ‘probably fake’ decides that what this little boy really needs is two rounds inside of him.

Being an ally means striking a fine balance, and acknowledging that whilst you can use your privilege to fight against injustice, you will never (and should never) be a leader in this movement. You can be a follower, a helper and a supporter but your voice should never drown out that of the community suffering the injustice, because honestly you will never know the pain and the discrimination they face every single day of their lives. So we can sign petitions, we can join protests, and we can donate money, but when less privileged people speak we listen and we learn and we never EVER presume to know more or know better or realise just what it is they go through. If you want some things to do to help, try here:

Even in writing this article, I feel I am slightly allowing my voice to take precedent over the voices of those who should be steering the conversation. There are many who are much better equipped to talk about their specific movements against injustice. I can’t list them all but here are a couple I encourage you to follow (all of them are supporters of the BLM movement and are allies or members of the LGBTQI+ community, otherwise they will not be included here. Equality is invalidated if not everyone is included):

Blood shouldn’t have to be spilled for justice to be reached, but it’s tragic that it still sometimes isn’t enough to enact change. We all need to raise others up, to put ourselves metaphorically (and physically if you can) between the protestors and the rubber bullets, to hold up the megaphone for those whose voices need to be heard. At the time of writing America is on fire as Black people fight to literally be allowed to live without fear in their own country. Fellow vampire skins, silence is a form of violence, so don’t stay silent whilst this massacre continues. And for members of the BLM movement I hope you read this article written by this skinny little white girl and know that we fight with you, alongside and never in front. 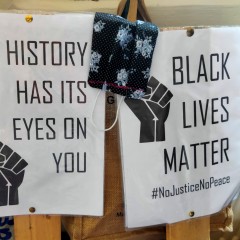 How to: Check your privilege (from someone who has a lot)