Voice MagBlogsWhy the All Lives Ma…

Following the brutal murder of George Floyd in Minneapolis by white police officer Derek Chauvin, protests have erupted across not only the USA, but globally with marches taking place here in the UK in cities including London, Manchester and Birmingham. Celebrities such as Halsey and Machine Gun Kelly have joined the protests in LA, with many more advocating for racial justice on social media platforms.

The problem with the slogan ‘All Lives Matter’ is that it is belittles the ‘Black Lives Matter’ movement- bringing attention not to the systemic racism and violence in society towards black people, but shifting the focus towards the idea that being white does not mean your life is hard. This statement has never been disputed; being white and having a hard life are not mutually exclusive- the difference is, is that your race is not one of the factors that is making your life harder. Shown by the huge cultural variety of people involved in the BLM marches, supporting BLM does not mean one hates all white people and does not mean that everyone’s lives don’t matter- instead, it brings attention on a group of society who simply because of their race, make up 23% of fatal police shootings in the USA, despite only making up 14% of the population.

An analogy to help explain why using the phrase ‘All Lives Matter’ is counter intuitive: if house is on fire, should the fire-brigade spray water on all the houses in the neighbourhood because they all matter? Obviously, the answer to this is no, and that is exactly what BLM is about- helping bring not only justice but safety as well, to a race who have been marginalised for generations. Once the burning house has been saved, and all the houses on the road are equal- having equal worth and opportunity- then the universal statement ‘All Lives Matter’ is applicable. Yet in 2020 America, and all across the world, your race is still a huge factor in determining your treatment by society. 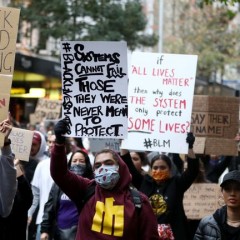 Why the All Lives Matter Movement is problematic