In this increasingly bizarre world of ours, Boris Johnson has moved from a sideshow buffoon to the highest office in the land. Inevitably social media has been chock-full of memes and jokes from people all over the political spectrum, with even Dwayne ‘The Rock’ Johnson is getting in on the joke. Whilst the jokes are plentiful, the question still remains - are they harmless or do they actually help Johnson?

There’s obviously a lot to find funny about Boris Johnson, with even his name being an innuendo. First and foremost is his physics-defying messy hair and its inability to reach anything close to consistency. There’s also the ridiculous pictures of his tennis playing, which looks like something straight out of a political cartoon. In a world where there is so much to be miserable about, there are obvious benefits to humour. It’s important to find catharsis and levity in the midst of darkness, and laughing can just feel good.

Beyond this, comedy can be a crucial part of resistance and bringing mighty and powerful figures down from their pedestals, with figures like Bassem Youssef using political satire as a means of challenging governments.

On the other hand, in focusing on what’s funny about him, we risk ignoring what’s harmful about him. Incompetence aside, Johnson’s infamous messiness, which is fodder for many of the jokes about him, is largely a deliberate facade created by him. It’s common knowledge that Boris Johnson has been seen to ruffle his hair before going on camera, and with his keen media awareness he gets to play the role of the ‘loveable rogue’ and evade responsibility for most of his actions, at least in part because we’re too busy making jokes about his silly elements.

And the harm he can cause should not be underplayed. Whilst his bumbling incompetence seems silly, it severely weakened Nazanin Zaghari-Ratcliffe’s case to get her out of the Iranian prison she remains incarcerated in to this day. Much like his hero Winston Churchill, he has a firmly imperialistic view of the world, writing in the Spectator in 2012 that “The best fate for Africa would be if the old colonial powers, or their citizens, scrambled once again in her direction”. More specifically he has denigrated the people of Congo by calling them 'piccaninnies’ with ‘watermelon smiles’, mocked burqa-wearing Muslim women by writing that they ‘go around looking like letterboxes’, and also has a history of deeply sexist and homophobic comments.

Beyond this, he’s also known to have ties to alt-right figurehead Steve Bannon and has appointed a cabinet full of deeply controversial figures. At a time where hate crimes have soared, especially against LGBTQ+ people and Muslims, making Boris Johnson purely a joke figure ignores the real and specific threats which he poses (both directly and indirectly) to oft-maligned and disadvantaged people in society.

Ultimately I still think there is a value in mockery, especially in the sea of misery and chaos we all live in, where most of us are barely treading water. However in trying to find that moment of levity we shouldn’t lose sight of the big picture, because as prime minister Boris Johnson has an immense amount of power to affect the lives of so many people, and if we get distracted by his clownish antics he could get away with causing extensive harm - and there’s nothing funny about that. 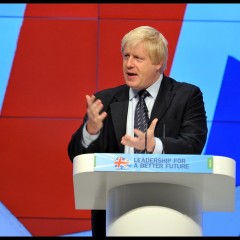 The cruel joke of Boris Johnson