When we're talking about the inclusion of people from the LGBTQ+ community for Pride Month, I think that Dear White People, the social satire created by Justin Simien is a great example.

Broadly speaking, Dear White People isn't a show about being LGBTQ+, instead, it has a wider lens as it focuses on the BSU (Black Student Union) of Winchester, a (fictional) historically white Ivy League university in the USA, and the issues these students face. However, what makes this show's representation especially powerful is the way in which it seamlessly threads its gay, lesbian and bisexual characters into the fabric of the show (disappointingly Dear White People features no known trans* or non-binary characters yet).

The main vehicle for the exploration of themes relating to being part of the LGBTQ+ community is the character of Lionel (played by DeRon Horton). Lionel is an awkward and nerdy journalist and truth-seeker in the primary cast of characters. The first season focuses on Lionel's self-discovery as a gay man, with Simien drawing upon his own experiences as a gay black man. Progressing the ideas of the first, the second season focuses on him finding his place amongst the LGBTQ+ community of Winchester - which is used microcosm through which Simien can satirise elements of the broader LGBTQ+ community. Horton's endearingly awkward performance and the very specific and truthful writing of his character sells his broadly relatable story about finding yourself and finding your place in the world. What's more is that Lionel being gay is by no means the entirety of his character and performance, his role in solving and recording the mysteries that thread through the show is absolutely crucial. Outside of Lionel, there are also several LGBTQ+ characters across a slew of different racial identities, who appear at various points, the most fun of which being Lena Waithe’s sporadic and hilarious appearances as a lesbian DJ/reality TV star in season 2.

What makes Dear White People’s representation so good is how casual and incidental it is. Instead of it feeling like any of these characters are in the show as ‘The Gay One’, they’re fully fleshed out humans with highs and lows who are relevant to the plot in ways which have nothing to do with their LGBTQ+ identity. At the same time, being gay, lesbian or bisexual is inseparable from their characters, instead being one of the many interwoven components of these incredibly well-written characters slidingly perfectly into a broader show of multifaceted people with a huge range of personal issues, experiences and viewpoints. 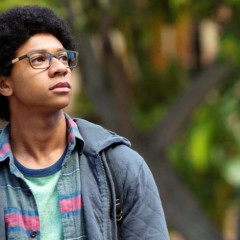