Could you first introduce yourselves to the reader?
We are the 2015 World Beatbox Champions, The Beatbox Collective, comprised of seven members: Bass6, Ball-Zee, Bellatrix, BFG, Experimental, Hobbit and MC Zani and for Edinburgh 2018 we had The Petebox as an honorary member and addition to the five member show

Tell us about your show?
Bass6: What's Your Sound is an introduction to each member, exploring the full range of beatboxing and the infinite possibilities of the human voice, how we met, what inspires us and what we love to do. Pushing the vocal boundaries and re-enacting our favourite influences of life to engage with all audiences.

How and when did you get into beatboxing?
Hobbit: We all have our own journey and path to how we got into beatboxing and it's so interesting to see how those have bought us all together. For me, both my parents were musicians so I always had music around growing up. When I was at school I fell in love with the drums and started playing in a few bands, but had a love for hip hip too. My friend's brother had a tape with a bunch of hip hop tracks on and one of these was a beatbox skit by beatbox pioneer Rahzel. It blew me away and I started listening to more of his stuff. From playing drums I always made sounds so these naturally mixed together and then it just became a habit I kept doing. For the the first couple of years I'd beatbox (a lot) in my bedroom, until I found out about a beatbox event in Bristol, went along, met the UK scene, and the rest, as they say, is history.

What do you like about beatboxing?
MC Zani: I like beatboxing for various different reason. One of the main reasons is that it is continually evolving. Just when you think there can't possibly be any new sounds, you hear a beatboxer doing the most incredible and unbelievable things. Also, I love how expressive it is. It can portray any feeling of emotion and vibe. Beatboxers are now creating art rather than just noises. Its application is limited only by your imagination and creativity.

Why did you decide to perform together?
Hobbit: We actually all met over the years at either festivals, jams or the UK Beatbox Championships, battling each other. So we all met and worked together over time. Then in 2011 or 2012, Shambala Festival asked Bass6 and a few others to put together a show for the main stage as a beatbox orchestra, but aiming at the raw beatboxing side of things rather than the a-capella groups you'd normally hear. We got together a super team of beatboxers, I think 10 or 11, and had the time of our lives performing there (and have done ever since!). After performing together and having such a wicked time we decided to keep on doing bits, which at first was mainly over the summer festival season. As those first couple of years were more just shows involving jamming tracks and vibing, we saw what worked and what didn't. Over the years certain people moved on and things changed but the group now has been there from day one and the future is continuously full of awesome and interesting surprises.

How many times have you performed at Fringe?
Experimental: We brought What's Your Sound to Fringe in 2016 for its premiere run and had some fantastic responses, even receiving 5-star reviews in its opening few days to our delighted surprise! This year was our second run in Edinburgh and once again a highlight of our calendar, and hopefully more to follow!

What do you like about Fringe?
Ball-Zee: So much! Firstly the atmosphere of the city when the Fringe is on is something special in itself. The amount of amazing, diverse shows is crazy, I love that you can see so much different stuff in one day. It's also great to see the friendships between different performers/venues/punters/security and anyone else you can think of grow from year to year.

What advice would you give to young people who want to get into beatboxing?
Ball-Zee: It's a lot easier to get started with beatboxing these days because of the internet boom. Firstly I’d say learn the basics via YouTube (can be done in one day!) or better yet in person if you know someone... then away you go! Try and get to open-mic nights and jams and most importantly head to events like the UK Beatbox Championships, which are happening on the 26th October at Battersea Arts Centre, to get inspired, Meet people of all different skill levels and be welcomed into the community!

Where and when can people see you perform?
MC Zani: Our next London show is on the 26th of October at the 2018 UK Beatbox Championships (which we organise, too)! We will be doing a small showcase there as well as teaching a workshop the following day. This will be at the Battersea Arts Centre. We do also have a full show supporting one of our heroes, Roni Size, at Brixton Electric on November 23rd. To keep up to date follow us on Facebook or Instagram.

Thanks to Beatbox Collective for taking the time to do this interview!

For more information on the UK Beatbox Championships, and to purchase tickets, visit the website. 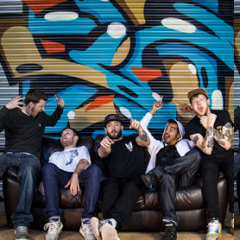