I know that because I kept a record of what films I watched and rated them out of five. Out of 1203 films I rated just over 70 of them films 5 stars. So I decided to write a list of the 5 star films so that the Arts Award readers can enjoy them to. These are purely my own opinion so they won't be everyones cup of tea but hopefully you can find at least one film you can enjoy!

These films are Disney greats, to me the first 3 are the best and the next two do not have the same great feel to them.

I must quote this film at least 3 times a day. I miss Brittany Murphy.

One of my all time favourite films, John Hughes FTW!

Julie Andrews. What more do you want me to say?

You is kind, you is smart, you is important.

How Mary Poppins came into our lives.

This film is just genius.

Pierce Brosnan's singing is enough to make anyone watch this film.

Tiana is my favourite princess, I have to add her to the list.

First time watching this film and I just really appreciated it. Sarcastic and witty with a heartbreakingly beautiful story.

It's like Dangerous Minds but this is a true story.

I just don't understand how Julia Roberts fits all her hair under that wig?

Live everyday with the same drive and determination as Elle Woods trying to get into Harvard.

Just watch this. If you only pick one of the films off this list to watch. MAKE SURE IT'S THIS ONE.

Just to warn you, it's a musical.

English cinema at it's finest.

I liked it, just give it a try.

John Hughes back at it again.

He's just too pure. I'm getting emotional just thinking about it.

It's another musical, just to warn you part 2.

Another film I gave 5 stars after the first watch, Greta Gerwig is a bossssss.

It's in black and white and has Sarah Paulson in it.

Was turned into a musical, there's dancing and Geordie accents, two of my favourite things.

Not a musical, but there's music, do with that what you will.

I just can't believe that Gary Oldman is under all that make-up.

May or may not be a musical.

Includes scenes some viewers may find distressing, scenes that involve books and fire.

So many unfortunate events and thats only the first 3 books!

If you want an Academy Award nomination, work with David O'Russell, and by Jennifer Lawrence.

I love Love and I love Basketball.

Drew Barrymore all the way. I miss Brittany Murphy.

Why didn't a boy sing a song for me whilst I was at football training?!

Jessica Chastain is a boss.

I wish I was clever.

All the feels of an 80's film but with Emma Stone.

Made me want to start hosting poker nights for crazy rich men who don't know when to stop spending money!

I wish a rich lady in LA would let me live in her house for a break.

I HATE the husband in this film.

Katharine Hepburn and a leopard is the pair I never knew I needed in my life.

Maybe one of the only times you'll see Jessica Brown Findlay not wearing period clothes.

Jessica Chastain is still a boss.

This film mentions Runcorn, if that doesn't make you want to watch it, then I don't know what will.

I didn't expect the story to go this way.

The chemistry and the talent between these kids is something you rarely see even in actors who have been doing it for years!

Some of the points in this film may raise questions but just wait for the ending. Full on talent in a tiny body!

How cute is Michael Cera though.

It's Cher. Cher is in this film. Cher.

Who ever said Shirley Temple couldn't act in her later years is an idiot.

Lunch time poll - You have 24 hours to live, what films will you spend the time watching?

Each of these films listed either spoke to me cinematically and made me think about them for days or warmed my little heart to the point of no return.

If you want a film that you can switch off and relax to or one to sit and appreciate the art of film making to, hopefully that can be found on this list. 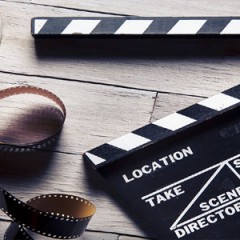