Interestingly the second most nominated film was Dunkirk with eight, pipping Three Billboards Outside Ebbing, Missouri (seven) to that position – neither following as closely behind The Shape of Water as expected. All three are up for Best Picture but Three Billboards’ Martin McDonagh misses out sorely on Best Director to Phantom Thread’s Paul Thomas Anderson. Phantom Thread gets six (again, surprisingly many), and Blade Runner 2049, Darkest Hour and Lady Bird get five.

An outside chancer that my Editor will ferociously appreciate is an Adapted Screenplay nomination for Logan, which imbued emotion in it in a way no Marvel film had done before. This signifies the first Marvel nomination in a major category. [Editor's note: I’m ecstatic Logan has nominated. Its snubs elsewhere in awards season are a travesty.]

A record in this year’s list comes in the form of Mary J. Blige’s, whose first two nominations ever signify the first time a person has been nominated in both music and acting categories in the same year.

Sticking with Mudbound, its cinematographer Rachel Morrison becomes the first ever, female Cinematography nominee. Another first is that all nominees for Best Director wrote their films, too, though only Paul Thomas Anderson wasn’t nominated for an Oscar for doing so. A fun one is that Kobe Bryant is the first NBA basketball player to be Oscar nominated - for Animated Short Film, Dear Basketball.

Jordan Peele also represents only the third person to be nominated in the ‘top three’ Best Picture, Director, Writing categories for their first feature film. It’s also important to note that Get Out is the most nominated horror-thriller ever. 22-year old Timothée Chalamet’s Best Actor nod for Call Me By Your Name makes him the third-youngest actor to be nominated – CMBYN is nominated four times including for Best Picture.

There is also an opposite of ‘firsts’ this year: Meryl Streep (The Post) gets her 21st Oscar nomination and cinematographer Roger Deakins (Blade Runner 2049) his 14th – though Deakins has never, ever won.

But who was ignored? James Franco missed out on a Best Actor nomination for The Disaster Artist, which was considered a given after his win at the Golden Globes. However, since then allegations of sexual misconduct have emerged.

Steven Spielberg has also been nominated everywhere for directing The Post but not here. Armie Hammer’s Supporting Actor nomination for CMBYN was also heavily expected. Some were surprised at Patsy Jenkins’ (Wonder Woman) snub for Best Director but this just wasn’t going to happen, I’m afraid. 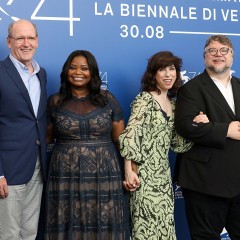