2017 was an interesting one, appearing to be a great one for the high quality action rather than for the deep drama. On the list we have Logan and Wonder Woman showing the more successful Marvel releases alongside Spider-Man: Homecoming and Guardians of the Galaxy vol. 2 overshadowing what has certainly been a hit-and-miss year for them. Outside the comic book canon strong actions came from the long-awaited returns of directors Edgar Wright and Christopher Nolan with Baby Driver and Dunkirk, respectively not to mention Ridley Scott's Blade Runner sequel and taking the title of Most Woke Film of the Year, Get Out.

That doesn't mean dramas were completely forgotten; last awards season darlings La La Land and Moonlight make appearance for pulling heartstrings. As we head into awards season, the UK will get a barrage of top dramas in the new year. Finally, comedies this year demonstrate an appetite for novel comedies that rejuvenate an existing formula. T2: Trainspotting sits alongside outside chancers The Big Sick, Girls Trip, and the upcoming The Disaster Artist. The Death of Stalin brings out the best of comedy novelty from comedy royalty in cast and crew.

The almost-not Oscar winner for Best Picture this year astounded for more reasons than the furore it was part of at the Oscars. Painting a perfectly unique picture in the life of a gay black man from a US inner city, Moonlight stuck in minds for all kinds of reasons: its singularity and boldness, its audio visual beauty, stellar performances, and visceral scenes. Mahershala Ali’s performance stood out for many but for me it was Alex R. Hibbert’s performance of Little aka teenage Chiron in the best youth performance of the year.

Edgar Wright comes up with the good stuff again, demonstrating on the biggest scale yet his mastery at his unerring, unique style of action-comedy. Robbed of a Golden Globe nomination for Best Comedy/Musical Film this week, its lead Ansel Elgort as the eponymous Baby surprisingly managed to grab a Best Comedy/Musical Actor nomination. It’s everything you’ve seen from an Edgar Wright written and directed flick but on speed. A feelgood high quality action that’s atop a year that produced a good bunch of high quality actions beside.

One of those high quality action films was Logan, but Logan is distinct in its seriousness. We’re most surprised and upset by Logan's lack of recognition at this week’s Golden Globes nominations list where, I expect, its lack of laughs worked against it. It doesn’t fit into the remit of award-worthy dramas but an unquestionable hi-concept drama it is. The high-octane but heavy weighing film signified the end of the Logan character anthology and did so in the perfect way. It tested Logan, brought in a brilliant new character in Dafne Keen’s Laura and painted a dystopian world for the X-Men that hit a lot of us in the feels. Read the full review here.

Ten months ago fans of nineties cinema and cinema fans from the nineties chomped at the bit to see T2 Trainspotting, the sequel to Danny Boyle’s 1996 chef d’oeuvre, Trainspotting. It brought back the full cast to tackle altogether new demons the madcap group developed in the real time twenty years since the last outing. It was heartwarming to see these faces back on screen together and painful to see them still struggling. Another master of the high action, Danny Boyle’s aesthetic side made a welcome return in a glorious testament to Technicolor.

Of course, the almost-winner of the 2017 Oscar for Best Picture licked its wounds with the six statuettes it did win that night. Emma Stone’s performance as Mia shone in a role that wouldn’t seem so meaty on paper. Ryan Gosling’s performance was more sedate than the hype suggested but that can be cast aside – but not forgotten. Very much a musical for the modern age, its merits were in far more than its stellar music by Justin Hurwitz; the hypermobile cinematography capturing an ever-changing Hollywood and a soundscape that did one better made La La Land one of the most memorable films of the decade. Read the full review here.

The Death of Stalin

Armando Ianucci returned with his most ambitious project yet. Writing and directing his latest – and biggest budget – feature film with an international, star studded cast including Steve Buscemi, Jeffrey Tambor, Andrea Riseborough, Paddy Considine, Jason Isaacs and more. The political satire posits a version of events between generals following the death of the Soviet leader, Josef Stalin where an ill-conceived power grab is concocted. Ianucci is the unsung mind behind The Thick Of It, Veep, Alan Partridge meaning the story progresses in ways you cannot predict through dialogue no one else could write.

The film that will peak many, if not most, year-end lists is Christopher Nolan’s latest. I know I wrongly predicted a sallow outcome to the headline “Christopher Nolan to direct World War II film”, having become too accustomed to his hi-concept work. However, the reality shows that Nolan’s mind can bring fire to all kind of projects. It tracks soldiers on their way back home as they’re redeployed for the battle at Dunkirk, where the Nazis came closest to reaching the UK. An astonishing spectacle made up with practical visual effects that develops the most original World War II drama for a long time, indeed. It did well in the Golden Globes list this week too, taking three nominations.

Jordan Peele’s film that tells an uncomfortable story about how black people feel in today’s America set the film world alight earlier this year. It is essentially exaggerated but is the most woke film of the year because of the ways in which it illustrates everyday racial microaggressions that people of colour endure – particular those in mixed relationships. Brit, Daniel Kaluuya got his acting catapult in leading this film which he does by perfectly portraying an immense level of terror and fear. Did 2017 even happen if you didn’t see Get Out?

The most successful female led and directed film in history was held up to demonstrate that more gender diversity is needed and wanted from Hollywood. Director, Patty Jenkins, and Wonder Woman/Diana herself, Gal Gadot, made an impeccable partnership that ensured that Wonder Woman’s story will not be disappearing any time soon, nor will it be relegated to the lower echelons of the Marvel canon. Another sad omission from the Golden Globes.

The second long awaited sequel in the list but here we had to wait 35 years to see the sequel of Ridley Scott’s Blade Runner. Scott returned to the helm bringing Ryan Gosling to carry on the spectacular story and Harrison Ford, who led the original back to give a helping hand. Gosling’s ‘K’ tracks down his blade running predecessor after both their lives have taken a major turn for the worst. Carrying on from the aesthetic wonder that the original established, cinematographer Roger Deakins creates what is widely considered his most beautiful work so far. A big surprise snub from the Golden Globes.

Manchester By The Sea

I Am Not Your Negro 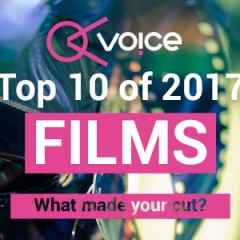