Voice MagBlogsThanks for the memeo…

Sometimes, it's the small things for which we're most grateful.

Without resorting to describing what a meme is in a needlessly academic way, it's important to be succinct in my gratefulness for the strange and singular place the meme occupies in cultural communication. If I cast my mind back, the first popular meme that I picked up was the Trollface meme; trolling, for many years, being synonymous with memes. It was the face of the popular and perhaps original meme-exclusive Facebook fan page "See More", which had trolling at its heart and engendered the unspoken ethics of memes for years. These ethics such as crediting properly, referring to memes by their designated titles, and enabling creativity were rules that gave the practice a sense of community and sacrality that didn't stifle the freedom of flippant, sometimes offensive, comical expression as its function. It's a remarkable phenomenon for an image, a still image, a soundless moving image or a six-second video, which has no personal value to you to make you laugh out loud and it's that small value to the humble meme that has infiltrated the use of the internet as we know it and that we must continue to hold close. 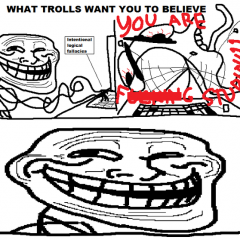 Thanks for the memeories