Privacy and security are big parts of the general focus and ethos of Mozilla, and Mozfest doubles down on that thinking.

This year at the Festival there were a series of keynote speakers, and I happened to catch Sahar Aziz talking about digital inclusion, and the importance of the internet in the fight for democracy.

A lot of time in her talk was dedicated to the Arab Spring, and how social media and the Internet was used to facilitate that movement. She emphasised how now Governments – both hard authoritarian and 'soft authoritarian, as she termed Western States – are now more fearful of internet movements than they are physical gatherings.

Sahar also warned about being drawn into false stereotypes about Arabs and Muslims, who she asserts are the same as us, wanting the same freedom, democracy and rights as us. Their bravery to standing up and fighting for that democracy was praised, as she poignantly asked how many of us would be brave enough to protest.

Further warnings were issued against getting sucked into the "militarisation of rhetoric", as she so brilliantly phrased it. The Government are always discussing wars; war on terror, war on drugs, war on cybercrime and so forth.

As German philosopher Max Weber said, the State have a "monopoly of the legitimate use of physical force," and this language appears to attempt to legitimise violence as a solution to social issues.

On the subject of State violence, time was dedicated to the Black Lives Matter movement, and the horrific systemic racism that continues to exist, even in the West. Sahar laments the notion of a colour blind society, arguing that claiming society is colour blind is actually just freeing yourself from the burden of reality. That reality is a depressing state of affairs.

She vehemently disagrees with the argument that "Black Lives Matter" is a racist movement, stating that it is actually working towards "remedying an inequality."

Finally, she concludes that in this age, where Governments are building electronic armies to attempt to stomp all over our rights, that we all have a responsibility to "guard your shield, [and] defend our fundamental right to a free internet."

You can watch the whole series of talks through the video below, or alternatively follow through to this link. Sahar's talk starts at 24:50.

I was live-tweeting throughout the talk, and some of Sahar's key quotes can be found embedded below. 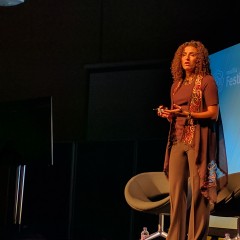