Learning lines for actors is like Marmite that's gone off - everyone definitely hates it. However...

There are three phrases a director says that make us actors put on our tiara's and storm out the door. The first, and probably the most classically hated phrase in all of theatre, 'From the top', usually said just at the point that everyone's energy hits rock bottom. If only there was a way of making rehearsals more interesting! The second being 'break's over, let's get back to work' - because that's just always a sad time. And finally, the one that always catches you by surprise; 'off book by next week' meaning 'no scripts'. Ugh. We love acting because we love getting up and doing stuff, but you know when those words are uttered, that at some point during that week you're going to have sit down and tediously go over the same words, but desperately finding every and any excuse not to.

Having directed a few of my own plays in the past, it's incredibly infuriating when someone hasn't learnt their lines and is even more so when you're acting opposite someone who's giving more attention to their script, than you. Since then, I've always made the effort not to be 'that guy'. But during the rehearsal period of a short play I was performing in called Tainted Love, about a soldier who doesn't go back to his girlfriend after the First World War because of what he did and experienced in France, I discovered that when you're learning your lines, it's about more than just learning the words. The short play was a duologue, so I had lots of lines to memorise and it wasn't until I stopped look at the script as a bunch of words I had to remember, and started looking at it as real speech, that I started rapidly learning it.

It's only when you start picking the dialogue apart that you begin understanding it, and once you understand something, learning it becomes infinitely easier. Discover for yourself the motivation behind the lines and the stage directions - what's motivated them to speak and move? Is what they want to say what they're actually saying? If you don't know what something is in a script, then go find out what it is. When I performed the musical Rent, there's a song called 'La Vie Boheme' which just lists loads of obscure references to American culture in the 90's and it was only after the director sent us away to learn what each reference was, that the song was transformed.

Admittedly, learning lines still isn't the most exciting thing, but it's still an important part of the creative process and if you can get it right, then you'll be doing yourself a massive favour when you get back to rehearsing. Whether you've got a couple of lines or all of them, it's not just the words that needs to be learnt, the motivation, meaning and intention all need to be considered and understood as well, because if you don't know what you're saying, the audience probably won't either. 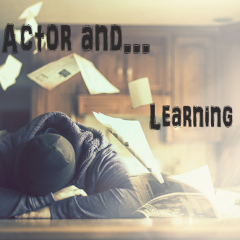 The Actor and… Learning Lines

Learning lines for actors is like Marmite that's gone off - everyone definitely hates it. However...