Let's face it, we can't ALL be as good as Pierce Brosnan in Mamma Mia!, however...

As performers, our entire careers are spent in the endless pursuit of self-perfection; constantly striving to achieve a performance not even the most cruel critic could argue with. What we would do to have that presence on stage that sends shivers down spines, an energy that fills a space and a truth to our words, rivaled only by that of a politician. But, let's face it, we can't ALL be as good as Pierce Brosnan in Mamma Mia. However, all the fantastic actors I've ever seen or worked with, have appreciated the importance of the rehearsal period, whether it be before a shoot or a show. The 'It'll Be Fine, I'll Do It On The Night' types of people really should be thrown into the ocean and left to drown from the weight of their own egos - which brings me onto my first point about rehearsals.

Rehearsals are a collaborative process - even if it's just you and a director. Your natural ability may allow you to just hop into a role and perform it well from the get go, but what you'll never be able to do is to step outside your own body and see what you look like. The experience you're having may not be the experience everyone else is, and the audience didn't pay to come watch you have these special moments all to yourself - if you lose your audience for a moment and 'drop the ball' then bringing them back can be an uphill struggle. But the feeling of rehearsing a scene tirelessly to the point of tedium is a feeling far too common for performers. Your mind and body go numb as you mechanically churn out the same words to the same people in the same place, and you just don't give a hoot that your mum married your uncle who killed your dad. However this is where the better actors will go the extra mile, instead of saying 'if it's not broken, don't fix it' they say, 'if it's not perfect, better fix it'. When we know the cast and creatives well, and the script off by heart, it's easy to become complacent. We feel like we need a new level of pressure to push our performance up to that next level, like perhaps, a live audience, and so we don't challenge ourselves as much as we should.

So next time you find yourself in that place of tireless tedium - challenge yourself. You could pretend your next scene is in front of a live audience of critics and all your ex-partner's parents. Or, just try something completely different, have some fun with the scenes - make everyone starting the scene onstage be a dog and anyone coming in later must be a cat or change the setting to the polar opposite of wherever the scene is supposed to be. Perhaps set a classic Chekhov at a Chelsea match or a Sarah Kane play in a water park. Now, when you come back to the original scene, you'll have all these new ideas and loads of energy from chasing cats and humping furniture or screaming at the ref. And suddenly the scene will become fresh again. 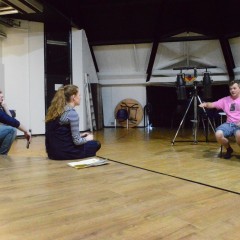 The Actor and... Rehearsals

Let's face it, we can't ALL be as good as Pierce Brosnan in Mamma Mia!, however...