How did you first get into theatre?

I have been going to drama school since I was five years old, and I followed my brother's footsteps into theatre.

When did you first start performing in the West End?

I started when I was 7 in Les Miserables playing Little Cosette, which I did for a year.

Did you enjoy the role?

Yes I loved it, I was with someone called Alfie Boe as Jean Valjean and Matt Lucas, so the cast was amazing.

You played Matilda from March 2013 to March 2014 — what was it like to play such an iconic character in such a big show?

It was definitely the best thing I've ever done in my life! It was amazing being a part that was so special… it was really difficult because there were really long hours and late nights and then school in the morning, and all during the year of the 11+, so there was that element, but it was all worth it.

So did you find it difficult to juggle school work and the show?

Well, I had to still go to school during the week — at least 15 hours a week — and I didn't find it particularly difficult, but obviously I was a little bit more tired than I would've been if I hadn't done it. But it didn't matter!

You appeared as Matilda at the Olivier Awards 2013, West End Live 2013 and the Oxford Literary Summit — were those experiences different to performing in the show?

Definitely — at the Oliviers and West End Live there wasn't a set, so we had to do Naughty on a block. The Oliviers was with the three other Matildas and it was also outside, so it was a completely different atmosphere.

Did you enjoy them more than performing in the show?

I think I enjoyed the show more, but being in an awards ceremony was just one of the best things.

You played Lily Potter for eight months in Harry Potter and the Cursed Child when it first opened in July 2016 — can you tell us about that experience?

Well, if I use a really cheesy line, magical! It was amazing, first being in the original cast because it was all so exciting and new, and the buzz of everyone trying to see it so desperately and the tickets selling out. They gave my family ten tickets, so I had to pick very carefully who I invited! It was incredible — the cast were amazing and I was a really, really tiny part but it was incredible.

Of the three roles, which was your favourite?

Probably Matilda, because it was a bigger part and I spent so much more time there it felt like a second home.

Do you prefer musical theatre or plays?

Either — I love singing but I love acting equally, or perhaps even more…and I'd love to do film and TV one day as well.

I believe you also attend Sylvia Young part time — did that help you get into the West End?

I have stopped now, but yes I did. There was a drama school more local to me so I moved there, but I'm still with their agency. It definitely helped me — my singing teacher who I was with from the age of 5 until 10 or 11, he basically got me into Les Mis because he gave me the confidence to sing.

What's been your favourite thing about working in the West End?

I think the energy and buzz of the audience and the actors, and the cast are always just lovely. And the experience of being onstage (over the nerves!) is just the most amazing feeling.

Have you got any other jobs coming up?

Not recently…always auditioning for things!

Will you continue working throughout your school career?

I hope I continue working, but it's hard to get things nowadays, especially at my age — at around 16 the auditions pick up — so now if nothing comes then that's good but if something comes I think I'll go for it.

Yes, I do! On stage and also on camera — I think as I get older I prefer more filming, but obviously it's a hard industry to get into.

Have you done any film or TV?

I've done advertising and I had some very background parts in one film recently.

Work hard, be confident, and be yourself in auditions. And when you are in auditions, think of the part as you, not you acting as the part. Make the part yourself.

Photo credit and copyright goes to Matilda the Musical, the RSC and the photographer of the photo 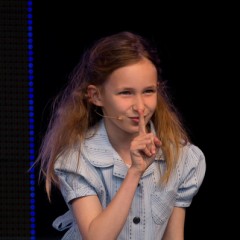