Kris James' latest music video for 'Home' hints at the seasonal lingering loneliness and desire for longing. As a second single and a follow-up to the disco-funk inspired 'The Way You Move,' James shows more of his vulnerable side via this heart-warming ballad.

The Liverpool-based artist details the inspiration behind 'Home': "Home was a song Stewart Boyle, Sam Williams and I wrote together trying to capture the feeling of having that special person in your life, the one that you know will always be there for you, who makes everything worthwhile. For those lucky enough, the thing that makes a house a home is the person or people in it, not the place itself. This song is about how seeing that person can feel like 'coming home.' It's so easy to get wrapped up in the day-to-day goings on of life, and overlook what really matters; if you've got that person in your life, never go a day without telling them you love them! As an impactful melody, we just felt we had to match the sentiment of the song with the gospel choir in the recording. I'm so pleased how it turned out, and I'd like to think this is one of the best songs I've ever written."

On top of his second album preparations, Kris James had quite a busy schedule over the past couple of months. First, he started the season with a European leg of tour dates supporting the legend Anastacia on her 'I'm Outta Lockdown Tour.'

James scored another astonishing slot on the Will Young commemorative 20 Years Tour for October and November. He supported the Pop Idol Winner on a two-month-long leg all around the UK, visiting the likes of York's Barbican, Edinburgh's Usher Hall, Manchester's O2 Apollo, and two nights at London's Palladium.

You can watch the new music video 'Home' below: 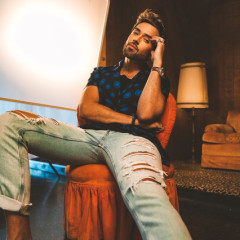