It’s time to bring some Black joy to your Instagram timeline.

There are times when I can’t move on Instagram for bad news, overused memes and bizarre stories that make me realise I’ve reached my social media limit for the day. Amongst all the noise, there are Black content creators who unapologetically brighten up my timeline. In the spirit of this Black History Month on Voice being all about Black joy, I thought I’d share some of my favourites to bring some much-needed Black joy to your timeline.

What’s one thing missing from Hollywood other than honest representation of different cultures? Charles Brockman III. Inserting himself into every cheesy-fan-favourite film with bad acting and even worse storylines, he reenacts the scenes we once lapped up without questioning how ridiculous they were – sorry, High School Musical. Charles is hilarious, and I have lost more hours than I’d like to admit watching him reenact some of my childhood favourites. From Twilight to modern Disney channel classics, his impersonations are unparalleled.

As bad as it sounds, whenever something bad or unbelievable happens in the news, I go to embracingblackculture for the Black take on the situation. Pulling the very best of Black Twitter into a carousel, embracingblackculture can make any situation funny but also be there for you when you need to share in a moment of outrage. Having been taken down by Instagram numerous times, this is one account that will always keep coming back.

When you think of what Paula Sutton has created, it really is something special. Showing a Black woman in a lavish country setting known for excluding darker-skinned people, Paula is living her best life and radiating pure joy. It’s no wonder she is a must-follow. Cottagecore is not only for white people; Black people like the cosy, peaceful living vibe just as much as the next person.

Tonytalks has to be the funniest person on Instagram. His videos have me in hysterics constantly, and I can’t help but rewatch them over and over. Dramatising scenarios we have all been in, with customer service people mostly, Tony knows what his followers want, and I cannot get enough of him. Also, too many comedy content creators who impersonate women have the worst wigs, which I find insulting. Tony is the opposite, he becomes the character, and his wigs are always on point – I rate that.

Who doesn’t love the world’s highest-earning TikToker? Khaby is Black joy itself, with your typical rags to world domination story. Quite possibly the last person on the internet with any common sense, it’s no wonder he has dominated the content creation game and has achieved nothing but greatness ever since – all without saying one word, might I add.

Laverne’s Instagram always makes me smile. Our society still has a long way to go in accepting trans people and the intersects that come with that. Laverne represents the trans community in the best way, living her best life, raising awareness and reminding everyone that #transisbeautiful with every post she does. I live for the dancing videos and the unapologetic transness; it is beautiful to see.

Lizzo is unapologetic like no other. She’s Black, she’s fat, she owns it, and she is amazing. Her videos are hilarious, and she does what she wants when she wants. Also, her music is everything the world needs right now – an uplifting reminder to be your authentic self, no matter what. Lizzo is an inspiration to everyone who is bored of letting their so-called flaws hold them back, and she is a joy to see on the timeline.

The aesthetic of Stephanie's Instagram is so comforting to me. Having followed Stephanie since joining IG, I live for the colours, the vibe and the ASOS recommendations. I love seeing people who look like me and continue to excel despite society constantly trying to shrink them. Stephanie Yeboah is the Instagram big sister every dark-skinned, plus-size woman needs.

The media is so saturated that it’s easy to miss films and shows with Black people as the lead because they’re often buried. Strongblacklead fills you in on the ‘Black-list’ of who is excelling on screen, breaking boundaries and stereotypes, and telling stories outside the norm. Highlighting Black excellence and bringing films on Netflix to my attention that I might have otherwise missed, Strongblacklead never misses a beat. 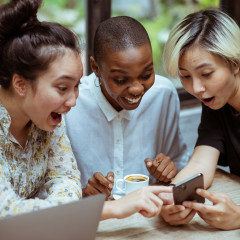 The best IG accounts to follow for Black joy

It’s time to bring some Black joy to your Instagram timeline.