R3HAB teams up with the Australia-born, LA-based Pop star that is RIP Youth. Partnered with the global fitness brand Peloton, they bring you this year’s hottest remix ‘It’s a Vibe’ (and it certainly is) all in support of this years pride month.

R3HAB’s remix of RIP Youth perfectly celebrates this year's pride, creating an LGBTQIA+ anthem specially for the high-intensity workouts of Peloton. Fuelled by some heavy electro-house grooves and triumphant pop hooks R3HAB’s remix of ‘It’s a Vibe’ is already smashed through to the top 10 on the iTunes Australian Dance chart.

“I’ve always been a fan of R3HAB since we worked together a while back so when I suggested to Peloton we reach out, we were so glad he answered the call. I’ve loved seeing him take this song in an exciting new direction and reinvent an exclusive remix of ‘It’s A Vibe’ to help Peloton kick off Pride Month. I’m obsessed with Peloton and how they’ve raised a community movement like no other.” says RIP Youth.

Premiered by Peloton Instructor Cody Rigsby and Peloton’s DJ John Michael during their ‘Pride Live DJ Ride’, ‘It’s a Vibe’ featured throughout their show at the Peloton New York Studios earlier this month. 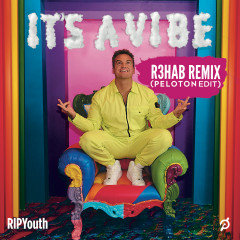