This week saw the release of Mica Millar’s debut album, Heaven Knows. Drawing inspiration from an accident in 2020 where Mica broke her back and narrowly escaped paralysis, the record delves deep into themes of hope, empowerment and human nature.

With jazz vocals reminiscent of Amy Winehouse and Duffy, the record combines the nostalgic familiarity of 60s soul with the fun basslines of modernity to create a sound that can be enjoyed by everyone.

Despite being a debut, Millar is already making waves in the industry, with tour dates booked for the iconic Albert Hall and London’s Jazz Cafè. The sweet sounds of Millar have also been gracing the radio waves, with airtime on many notable radio stations such as BBC 6 Music and Jazz FM. It’s no surprise that her music has proven popular, as the upbeat tempo and bluesy influences make for incredibly easy listening.

With tracks like Fool’s Fate sporting marvellous basslines and rock-rooted influences in Give View My Prayer, the record acts almost as a pick-and-mix of various genres and instrumentations that seamlessly amalgamate to create an incredibly cohesive sound that defines the album, reinvigorating what I believe to be a particular noughties-feeling semblance, reminiscent of early Adele and Christina Aguilera.

Heaven Knows is definitely on track to be a groundbreaking album, one that I suspect will reach high up on many retrospective ‘best of 2022’ lists towards the end of this year. If I were you, I’d grab tickets to a show and watch this space, as Mica Millar won’t be going anywhere in a hurry. 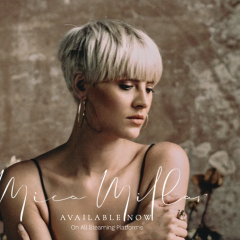