From ‘These Streets’ to ‘Caustic Love', Paolo Nutini is one of the most adored and well-respected artists of the last decade, inspiring artists such as Lewis Capaldi. Before the release of his first album in eight years, Voice looks back at his already incredible career.

Fresh from the familiar streets of Paisley, Scotland, Nutini’s debut album birthed an alluring, effortless vocalist as well as a skillful songwriter. Tracks such as ‘Last Request’ and ‘Jenny Don’t Be Hasty’ earned Paolo recognition among several press outlets. These Streets peaked at number 3 in the charts with ‘Last Request’ spending 35 weeks in the official UK chart. Although the album didn't go to number one, it was clear that the 18-year-old was here to stay, given the expansion of his fanbase in such a short period.  A more acoustic outing that plays on the singer's natural abilities allowed for a fitting introduction to someone who is now one of Scotland's most treasured musicians.

Flying straight in at number one, selling over 60,000 copies and certified 3X platinum, Sunny Side Up was Paolo Nutini’s second studio exploration. His Raspy Scottish tones spent four weeks in the number one spot. Whilst singles such as ‘Pencil Full Of Lead’, a grand mix of big band swing, pop and soul and ‘10/10’, a self-explanatory, catchy opener didn't have quite the impact one would expect, the album itself won “Best Album” at the Ivor Novello Awards in 2010. Many critics praised Nutini's obvious shift in direction and maturity with Sunny Side Up blending fragments of pop, jazz, rock and folk. Whether anyone approved of the singer's new sound, his ability to be completely transformative without care or judgement is something many musicians could learn from.

By far the singer's finest album to date, Caustic Love is the epitome of a grown-up soul. Unshakeable vocals, exuberant confidence with a side order of sultry melodies as many start to recognize the true artistic talent of someone who at times was considered an underdog. Caustic Love became the fastest-selling album of the year in the UK, spending 3 weeks at number one and selling an almighty 198,000 copies. Single ‘Iron Sky’ sampled Charlie Chaplin’s famous speech in the 1940 film ‘The Great Dictator’. Fellow singer-songwriter Adele praised Nutini’s performance of ‘Iron Sky’ saying “ This is one of the best things I've ever seen in my life hands down”. Caustic Love remains one of the gems of British music.

Paolo Nutini’s fourth studio album, Last Night In The Bittersweet is set for release on July 1st. So far Nutini has released 3 tracks from the upcoming body of work including: ‘Through The Echoes’, ‘Lose It’, and ‘Shine A Light’. The highly anticipated return of this fearless and passionate musician is well underway with the album set to become indie royalty almost immediately.  No one knows exactly what form the new tracks will take, although it's obvious that Paolo’s return is widely welcomed, with extra dates added to his UK and Europe tour ‘due to phenomenal demand. 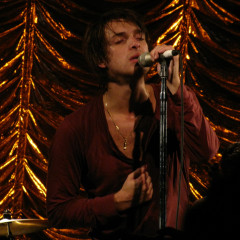 The definitive guide to Paolo Nutini