Most people now are aware of the impact that Jaws had in the summer of 1975 and the years since. Those alive at the time of the film’s release will tell you that there was a noticeable difference in the public (and even scientific) perception of sharks before and after Spielberg’s beloved blockbuster came out. It portrayed sharks as vengeful creatures, cold-blooded killers that hold grudges and terrorise people. The reality couldn’t be much further from the truth, of course.

In 2021 the number of unprovoked shark attacks worldwide was 73, nine of which were fatal. To put that into perspective, you’re more likely to die falling out of bed than being attacked by a shark. You’re also more likely to be struck by lightning than you are to even encounter a shark. Despite this, the release of Jaws sparked a sort of mass panic that led to sharks being feared and perceived as threatening, dangerous, vengeful creatures. After watching the film, thousands of fishers went out in an attempt to catch trophy sharks, free of any guilt because the idea that sharks were cold-blooded killers was so prevalent. If sharks are murderous people-hunters, there’s no remorse in hunting them. Oddly, it isn’t just great white sharks that became victims of the mass panic, either.

Since the release of Jaws, shark populations have fallen enormously – in the last 52 years, the global abundance of sharks and rays (a close evolutionary relative) has decreased by 71%. More than 30% of shark species are classified as threatened, which means they are vulnerable, endangered, or critically endangered in terms of their conservation status, and are at high risk to extremely high risk of extinction. 100 million are killed every year.

The impact of the representation of sharks was so bad that Peter Benchley, the author of Jaws – the book that Spielberg’s film of the same name was based on – later expressed regret about the way in which he wrote about sharks, and he spent much of his life as an advocate for marine conservation and an ocean activist. It isn’t just Spielberg’s classic blockbuster that has done damage to the portrayal of sharks in film, though.

In a study published in 2021, Brianna Le Busque looked at 109 shark films released between 1958 and 2019 and found that 105 of them (a whopping 96%) overtly portrayed sharks as threatening to humans, while three of them did so covertly. Only one film out of the entire 109 did not portray sharks as dangerous or threatening to humans: Finding Dory (2016). Disappointingly, perhaps the only reason it wasn’t guilty of the same thing as the other 108 is that Finding Dory features whale sharks, which survive mostly off plankton and small fish, and there are no recorded incidents of whale sharks attacking humans. Finding Dory was of course a sequel to Finding Nemo, which unfortunately does portray sharks as fearsome killers.

Shark film posters are also guilty of harmful portrayals, with around 75% of them displaying the shark’s teeth. The majority featured great white sharks, and bull sharks were the second most common to be featured on film posters, closely followed by fictional species.

This portrayal of sharks in fictional films also lines up with how they are represented in the news and media. They are practically only ever discussed when there is an attack of some sort, but when humans kill 100 million sharks per year and sharks kill less than one human per year on average, we should probably start asking some questions. Sharks usually only even attack a human when mistaking them for a seal in the first place, so why do they have such a famous reputation as cold-blooded people-killers?

In the years following the release of Jaws, the number of large sharks across the eastern seaboard of the United States fell by over fifty percent. In the Northwest Atlantic ocean, hammerhead, great white, and tiger shark populations fell by 89%, 79%, and 65% respectively between the late eighties and late nineties.

The portrayal of sharks in films is quite clearly having a negative impact not just on the general public’s attitudes towards them, but on their very survival as a species. The way they are seen now, as vengeful human-hunters, encourages people to hunt and kill sharks. Great whites being victims of that is bad enough, as even they are pretty much harmless to humans, but the impact is felt by every single species of shark. Even those that have never so much as attacked a single person. It is harmful to ocean life as a whole, and more needs to be done. 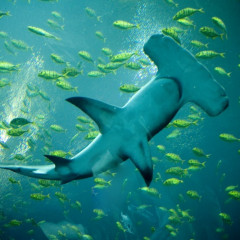 World Oceans Day: The impact of films on fins