For those unfamiliar with the face of Russell T Davies, you will definitely be aware of his work. If you didn’t have at least one episode of Doctor Who scarring you growing up, your childhood was incomplete. The screenwriter and producer is best known for modernising the popular sci-fi show, and cementing it into the collective childhood memory of Gen Z. Since the 1990’s he has been responsible for writing and creating  LGBTQ+ characters who are openly out, their sexuality visible rather than shrouded in metaphors, from ‘Queer as Folk’ to ‘It’s a Sin’.

The former of the two is arguably a more light-hearted portrayal of gay life in Manchester, yet even ‘Its a Sin’, with its darker themes, is still a joyous and deeply funny show, and the power of Davies’ writing never more evident than here. His dialogue, regardless of the project, is witty without being inaccessible, and engaging for a variety of different audiences. Nobody quite captures natural life so accurately despite the exceptional circumstances they are framed within. For example, the sci-fi of ‘Doctor Who’ or the frightening future of ‘Years and Years’ still feels entirely tangible. Elements of realism and relatability permeate throughout his shows, ensuring they connect with their audiences – a skill many writers struggle with but one Russell T Davies seems to effortlessly inhabit.

To discuss arguably one of Britain’s best writers, we must delve into his most popular and expertly crafted shows: ‘Queer as Folk’, ‘Doctor Who’, ‘Years and Years’ and ‘Its a Sin’.

The star of this show is undoubtedly Manchester’s gay village, centred around three friends who spend most of their time out in Canal Street. There is Nathan, a teenager who lacks confidence in his sexuality at the beginning of the series, Doctor Who enthusiast Vince who is in love with his best friend Stuart, the most sexually active of the bunch.

The show does not shy away from showing sexual content. ‘Queer as Folk’ presented homosexuality with a liveliness much needed after other TV shows stereotyped being gay as dark and transgressive. Davies connects audiences across the country with this group of lads from Manchester, with humour an essential part of the show.

There is a heart to this show that originates from Russell T Davies’ need to communicate his own experience growing up gay, which was finding its way into his writing no matter what. In an interview with The Guardian in 2015, T Davies stated that the series was about putting gay characters centre stage, because it had never been done before. ‘Queer is Folk’ is an important show that has normalised the visibility of gay relationships on the screen.

The Russell T Davies era of ‘Doctor Who’ is unparalleled in my opinion. Call me biased, as you do tend to hold onto what you grew up with, but bringing back a beloved classic TV show and making it more popular than it was before is a remarkable achievement. There are many factors that ensure this. One is the balance he strikes between writing dialogue for children, and still making it enjoyable for adults – something that is lost in Matt Smith’s fishfingers and custard era that even 10 year-old me cringed at.

His era also includes the introduction of characters such as Captain Jack, a bisexual time agent who cannot seem to stop flirting. It shows that the early series were inclusive without making it a statement, and that a generation of kids saw other sexualities on screen.

Years and Years follows the Lyons family from 2019-2034, and depicts the future of the UK. From Ukrainian refugees to immigrants being sent to camps, it feels all too real – especially Emma Thompson’s Viv Rook who has the essence of Priti Patel. Despite some frighteningly accurate predictions for the future of Britain, at the heart of T Davies' fantastic family saga is a love story between Daniel Lyons and Ukrainian refugee Viktor Goraya.

It is their relationship, and that of all of the characters, that is the strongest part of this show. Despite the grand events and concepts that feel like the initial draw to the show, it is the personal relationships that are the strength of the series, something Davies is a master at communicating.

Emotional, funny and joyous all at the same time, ‘It’s a Sin’ makes the AIDS epidemic its focus. A harrowing yet important topic, programmes about AIDS can sometimes be overwhelmingly dark. However, Russell T Davies handles the topic with sensitivity but also humour, celebrating the lives of those who succumbed to the illness. In 1981 a group of gay men come together in London, and each individual is finely crafted and realised – yet another example of Davies' powerful characterisation.

Critics have applauded the series, but it has also had an impact beyond the cultural sphere. The series led to an upsurge in sexual health testing, and as with ‘Queer as Folk’, the series normalised gay sex on screen.

From the late 90s to the present day, Russell T Davies has and is still transforming the way gay men are presented on screen. His scripting is never a lecture, always rooting his characters firmly within reality. Not only is he an icon within the LGBTQ+ community, but also in general, and is one of the best writers this country has to offer. There has never been a project written by him that has disappointed. This makes it all the more exciting to see him return to ‘Doctor Who’ as the lead writer, and there is every faith that he and his new lead, Ncuti Gatwa, can restore the programme back to its former quality. 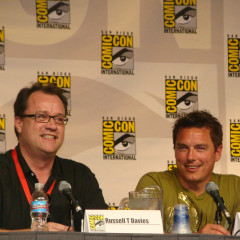 Russell T Davies: One of the greatest writers this country has to offer