The pinnacle of Eurovision is how ridiculous it can become. Every year, without fail, at least one country sends in an act generally just to take the mick – which provides us, the audience, with the most enjoyable moment in May we didn’t know we needed. Inspiration for tin foil couture? Check. A sudden realisation that you want to now learn how to play the violin because of Alexander Rybak? Check. The list goes on…

Every year without fail there are also those unique acts with quirky songs that we know could win (and sometimes they do, looking at Lordi’s Hard Rock Hallelujah here). These songs have a certain charm about them that makes them entirely loveable.

Here is a taster list of Eurovision’s oddball acts ranging from painfully cringe, surreal, and just generally, iconic. This list appears in no particular order because these songs don’t have to compete for an engraved spot in our memory. They all coexist happily together, their lyrics floating into our brains at the most inconvenient of times and their dances, simply too good not to emulate.

The iconic Finnish heavy metal band Lordi have a special spot in many Eurovision fans’ hearts with their monster masks and pyrotechnics. Not only did they seal Finland’s first-ever Eurovision win but they were also the first rock/heavy metal winners ever.

Saxophone guy! No really, if you type in ‘Eurovision saxophone’ Sergey Stepanov of Sunstroke Project really does show up in all top searches. Sunstroke Project has some absolute bops, and when they returned to Eurovision in 2017 (7 years after their first stint) they did not disappoint. The beloved saxophone player had his moment, multiple moments in fact, and all became well in the world again.

At the 2007 Eurovision Song Contest, chaos was truly unleashed with Verka Serduchka’s ‘Dancing Lasha Tumbai’. Any act that has you counting to three in German wearing a disco-ball star hat is sure to become a Eurovision icon. Sadly, that year Verka Serduchka came in second place – although their legendary song has stood the test of time, so who is really winning here?

Let’s be real, despite there being no winner for Eurovision 2020 (thanks pandemic) ‘Think About Things’ basically claimed that spot in everyone’s eyes. They found social media fame with their Napoleon Dynamite-esque awkward TikTok dance and eccentric pixelated jumpers. Their song has even been featured on Strictly Come Dancing. The meaning of the song is possibly the most wholesome thing ever because the lyrics are a dedication to Daði Freyr’s newborn child.

When they came back for Eurovision 2021, it was like we had all hit the jackpot. Finally, some jury-voted justice for this iconic act. However, some cruel fate had the group self-isolating and unable to perform live at the Grand Finals with their song ‘10 Years’.

Have you ever wondered what act came second to Loreen’s iconic 2012 Eurovision win with ‘Euphoria’? It was a bunch of Russian grandmas singing in the Udmurt language and having the time of their lives. The ensemble took to the stage, urged everyone to dance, and radiated all the good vibes.

‘Instead of meat, I eat veggies and –’ the first line of Citi Zēni’s ‘Eat Your Salad’ instantly sealed its iconic status in the Eurovision oddball hall of fame. Skyrocketing to popularity on TikTok, this feel-good environmentally-friendly song is one of the competing entries in this year’s 2022 contest. Citi Zēni is a band that loves a stage dive, to the point where even when it goes wrong (*cough* London’s Eurovision Party at the Hard Rock Hotel *cough*) they get back up on their feet and give it another go.

Subwoolfer are another competing entry at this year’s 2022 Eurovision Song Contest, made up of the mysterious other-worldly duo Keith and Jim. Eurovision detectives are trying their absolute best to unmask their identities before they take to the stage to sing about bananas and a reimagined tale of Red Riding Hood.

Picture this, a supergroup created for the sole purpose of representing Lithuania at the 2006 Eurovision Song Contest, singing a song titled ‘We Are The Winners’. The entire premise of the song is about how LT United are going to become Eurovision winners. Seriously, the lyrics include ‘We are the winners of Eurovision! We are, we are! We are, we are!’. Bold moves. Immense respect.

Dracula on Eurovision? Why am I not surprised?

Jedward represented Ireland two years in a row, and both of their songs are wonderfully cursed – however, you have to admit they do have quite infectious energy which makes them perfect for Eurovision.

Playing the violin and singing at the same time secured Alexander Rybak’s 2009 Eurovision win for Norway with ‘Fairytale’. It is truly one of the most iconic winning songs of all time. Sadly, when Alexander Rybak came back to Eurovision in 2018 with ‘That’s How You Write A Song’ it just didn’t reach the same heights as his winning song.

Who let this man onto the Eurovision stage? Starting with a dramatic surreal cloaked entry with heavy cello, it feels like the song is going to turn into a Phantom of the Opera spinoff – a tragedy very much impending. However, once the mystery man reveals his identity and drops the cloak we are met with a dishevelled man rapping about philosophy. There are more questions prompted by this performance. Why is there a Trojan horse? What is the deeper significance of the dancers' choreography? How did they come up with the lyric ‘I got only one rule, always stay cool / Like a swimming pool’?

Best lyrical moments include ‘don’t be dogmatic, bureaucratic / You need to become pragmatic / To stop change climatic, automatic / Need contribution from the institution / To find solution for pollution / To save the children of the evolution’. If this were to happen today, you know it’d be TikTok viral.

Folk instruments, a euro-club beat and masterful vocals – Shum is a wild full-on rave bottled up in a 3-minute performance.

Didn’t deserve last place. I’ll stand by that. Who doesn’t want a song that literally revolves around singing the word ‘Moustache’ over and over again…

The first minute of this song feels like an alternate universe. That’s all.

Just some relaxing acoustic lo-fi beats for studying. Nothing like shifting from the UK’s 2019 slightly religious ballad ‘Bigger Than Us’ to an aggressive tech song with lyrics like ‘Hate will prevail’ shouted by Hatari.

A puppet turkey singing ‘drag acts and bad acts and Terry Wogan’s wig’. Possibly, one of the most ridiculous Eurovision acts that was destined to never win douze points. Although, we commend this Euro-techno song for the lyrics ‘Shake your feathers and bop your beak’.

Performance art. Ahead of its time. A political edge. If ‘Push the Button’ came out now, it would reach the ‘Think About Things’ level of fame. Nothing like an unhinged, slightly awkward bunch of friends existing in their own unique plane of existence on the Eurovision stage.

Dami Im’s performance is not the go-to image of an oddball entry, for one it is a super emotional power ballad. However, she is seated for the entire performance, belting the most vocally challenging notes ever seen on a Eurovision stage – if that isn’t legendary, then I don’t know what is.

A bone-chilling performance, featuring a man at the top of a ladder wearing a suit and horse mask. Why? We don’t know.

Finishing off this sample-sized list of Eurovision oddball acts is a feel-good song from Italy featuring a dancing ape. 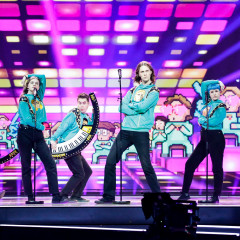 Eurovision 2022: The wacky but wonderful world of Eurovision oddball acts (that we love)