Over 3 million refugees have fled Ukraine now and a significant portion of those are international students from mainly Africa and India. Caught in the crossfire these students, in desperation to flee into Europe or even back to their homelands, have been the receivers of horrifying discrimination on both sides of the borders.

Nigerian medical student Jessica Orakpo has been sharing her journey leaving Ukraine with the public, and the low priority status granted to her by officials evacuating citizens from Ukraine. Orakpo had been living in Ukraine for seven years at the time of Russia's first attack, it was her home. Like millions of Ukrainian citizens, she had no choice but to start packing as they all watched the first Russian missiles strike. On her way to the Polish border, after walking for 12 hours she stopped at a shelter that, she was told, was expecting a morning bus to evacuate refugees to the border. When the bus arrived, the next morning, Orakpo hauled all her belongings towards the doors only to be told by officials: “only Ukrainians, that's all…if you are black you should walk”. As a Nigerian woman who had made Ukraine her home, she was denied a 30-minute bus ride over to the Polish border. She was left to walk the remaining 8 hours to Poland.

Africans fleeing Ukraine are reportedly facing extremely prejudiced segregation within Ukraine. Transport is apparently near impossible to access unless you are native to Europe. Alex, a student at the State University of Telecommunication in Kyiv, was stuck in the capital at the time Russia was advancing from the east. Alex, also trying to reach the Polish border through Lviv, Western Ukraine, reportedly witnessed the order of priority that had been established at the train station. The supposed order was; “White women and children first, white men second, then everybody else afterward if there was any space left.”

Selma El Alaui, a Moroccan student in Ukrainian, described her experience trying to board a refuge train. Selma was asked to pay for the service despite having suffered the same conditions as any other Ukrainian refugee.

“When they did let us in, they were like, 'You have to give us money because this is, this is not for free for you because you are foreign. This is not free for you’”

The attitudes on the other side of the Polish border seem to be just as, if not more, hostile towards refugees of colour. Reports of attacks start right from Przemysl train station – most refugees' first point of entry into the country. Polish police have stated that three Indians were attacked by five men at the station and were beaten so severely that one had to be hospitalised.

Alongside calls of “go back to your country” and other racial slurs, a new chorus has arisen, “Przemyl always Polish”. This chant has been spread rapidly across Przemyl and Polish social media. Police officers and Riot officers had to be deployed on multiple occasions to scenes where the chanting and harassment had gotten out of hand. On one occasion riot officers were stationed right outside the train station after groups of Polish citizens were found harassing and taunting a few Middle Eastern refugees who had stepped off the train.

Historian of the University of Pennsylvania Kimberley St Julian-Varnon, who called Ukraine home earlier in 2013, told CBS News that in Eastern Europe “the racial discrimination is not new, but to see it on display and being exacerbated by war it was just really heart wrenching”. Kimberley Varnon has studied race, foreign policy, and Russia for several years now and reminds the public of a very similar Syrian refugee crisis in December of last year. When seeking asylum at the Poland- Belarus border these refugees had barely any success and almost all were turned away. When asked what she thought the difference was in these two almost identical cases she explained “the key difference is race and ethnicity”. 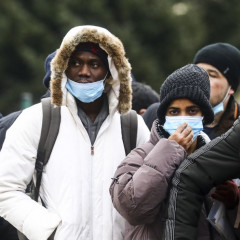