The first thing you need to know about the Russo-Ukraine relationship is that it’s steeped in history – and is far from simple. Some suggest that the inception of the war was embedded in the early 1990’s against the backdrop of the Soviet collapse, as Ukraine handed hundreds of nuclear warheads back to Russia in return for security assurance.

However, roots can also be found in the more recent 2014 impeachment of former fugitive Ukrainian President Viktor Yanukovych.

Victor Yanukovych was a powerful friend to Moscow, and seemed to share in Putin’s disfavour to the European alliances throughout his presidential reign. This was proven towards the end of his government, as he refused to sign the 2013 political and trade agreement offered to Ukraine by the EU. He decided, instead, to invest in a financial bailout package offered by Russia at the time. His decision led Ukraine into an extensive revolt and resulted in Yanukovych abandoning his presidential office and fleeing to Russia.

Putin later revealed that it was him that helped Yanukovych enter Russia, but he is said to now be residing in Minsk, Belarus (a close Russian ally country). On 2 March last week, a Ukrainian newspaper cited an intelligence agent claiming that Putin had plans for Yanukovych, and was going to “declare him ‘president of Ukraine’”.

Ukraine, and the West, accused Russia of supplying troops and arsenal to the rebel groups although Moscow persistently denied all claims. Over two hundred lives were lost in the back-and-forth over the border before France and Germany stepped in to broker a peace accord in 2015.

The Minsk II agreement called for a ceasefire, withdrawal of weapons, and release of prisoners. It declared that Ukraine was to offer amnesty and autonomy to the rebel states and in exchange, they would regain control of the Russian border in rebel territories. Point 10 of this agreement called for a withdrawal of foreign army and military equipment from the DPR and LPR. However, despite the referral to Russian forces, Moscow continued to deny any involvement and therefore were not bound by any terms.

The ceasefire remained until a sudden upsurge of treaty violations in early 2021. These spikes came as a result of pro-Russian rebels and Ukrainian forces noticing a build-up of alleged Russian military in Crimea, Belarus, and along the border.

US intelligence ascertained Russia was planning to deploy around one hundred and seventy-five thousand troops near the Ukraine border in December 2021. Kyiv complained, around the same time, that Moscow had placed at least 90,000 troops near the border making an attack possible the next month.

Across the border, Moscow denied the military presence in Eastern Ukraine and refused to provide military numbers or locations, making the point that deployment on their territory should not be of any other nation's concern. Moreover, Russia accused Ukraine of breaching Minsk II and refused a four-way meeting with France and Germany in light of this alleged breach. They went on to criticise the US and NATO for discouraging Ukrainian compliance by way of supplying the country with weapons and commanding joint drills. These actions seemingly encouraged Ukrainian hawks to regain rebel areas by force.

In December 2021, Russia sent over a list of demands to the US including a demand that Ukraine is banned from ever entering into the NATO alliance. This was alongside a demand for NATO to remove troops and weapons supplied to countries that entered the alliance after 1997, essentially returning NATO forces to where they were stationed before their eastward expansion towards Russia. The demands were refused by the US, NATO, and their allies.

In the weeks leading up to the attack, European allies met across the globe to put forward tactics to prevent war. On 7 February 2022 president of France, Emmanuel Macron met with Putin with an objective to persuade him to stand down and avoid a catastrophic war. Putin, however, threatened a wider conflict if Ukraine were to receive NATO support. On the same day Olaf Scholz, Chancellor of Germany, and American President Joe Biden met to discuss sanctions and strategies to prevent war. Emergency European councils met and threats were made to the Russian Nord Stream 2 gas pipeline in Europe.

On 16 February 2022, Russia pledged a drawback of troops, but once the pledge was deemed “unconvincing and unconfirmed” by the Ukrainian allies, who were left still trying to mitigate the threat of war. Less than a week after the pledge, the EU, including Britain, introduced new economic sanctions set to damage the Russian economy and its oligarchs.

Just two days after the sanction was unveiled, Russia set its first strike upon Ukraine. Troops entered from the north via Belarus, the south, and the east resulting in the “largest conventional military attack since WWII. Russia continues to move towards Kyiv as the UK and other European allies respond to the two million refugees fleeing their country. 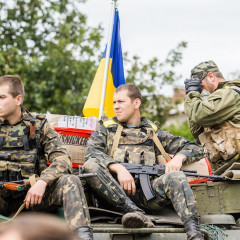 A brief timeline of the Russo-Ukrainian relationship