A detailed look at New Iranian Cinema and why you should check out some of the films belonging to the movement.

New Iranian Cinema films are adored by critics yet remain underseen by general audiences. While they’re a little more inaccessible than most movies, the background behind the movement is fascinating and the films themselves are wonderfully unique. (It’s important to note that “New Iranian Cinema” refers to films with specific characteristics made between the late 1980s and early 2000s – the majority of Iranian cinema is purely commercial and not relevant to this article.)

The nominations for the 94th Academy Awards have been released, and one of the most notable snubs this year is the complete lack of recognition for Asghar Farhadi’s A Hero (2021). Farhadi is one of the best filmmakers working today, and his latest feature is a perfect example of what he does best: layered, nuanced drama that, despite having an incredible amount of depth and social commentary, never expresses judgement and always has enormous empathy for every character. A Hero focuses on Rahim Soltani (Amir Jadidi) who returns a lost handbag full of gold coins to its owner despite being on a two-day leave from prison because of an unpaid debt. The drama that stems Rahim’s decision is as enthralling as it is stirring, and if you haven’t seen it yet I highly recommend doing so.

Farhadi was, in his early career, associated (to a small extent) with New Iranian Cinema, a term that refers to a body of films made in Iran since the late 1980s that possess certain unique characteristics that were, in large part, consequences of the Islamic Revolution. With the 1979 revolution came a change in leadership and consequently new laws, and the film industry was a major target. Ayatollah Khomeini, leader of the revolution, claimed that cinema was used to corrupt the youth when it should instead be used to educate the people. In 1982, the Khomeini regime introduced policies to change that, primarily targeting the representation of women and heterosexual relationships on screen. These policies forced the film industry to: make women wear scarves, veils, and loose-fitting tunics at all times on screen; constrain women to portrayals that upheld their dignity; ensure women avoided activities and movements that would reveal the contours of their body; and finally, ensure men and women had no physical contact and never looked at each other with desire on screen.

Naturally, these policies had a big impact on the types of films that could be made in Iran, and it affected the three looks of cinema (that of the camera and what it’s looking at, that of the audience looking at the screen, and that of the characters looking at each other). The look between characters on the screen was affected by the absence of POV shots, avoidance of cross-cutting and by characters of a different sex being forbidden from touching each other. The way the camera looks at actors was affected by the lack of close-ups and the objectification of the female figure being forbidden (exacerbated by the strictness around what constituted objectification). The way the audience looks at the screen was affected as their sense of realism and immersion was ruined – even the most conservative woman, for example, would never wear a veil in her own house, yet that became a common sight in Iranian films. As the restrictions set by the new regime affected the construction of realism, and Iranian filmmakers couldn’t use the conventionalised language of Hollywood films, they were forced to think carefully about cinematic grammar, leading to the characteristics that now define New Iranian Cinema. So… what are they?

The presence of the filmmaker and/or the apparatus on screen

There are countless examples of this in New Iranian Cinema. With the realism compromised from the start, the doors were open for more experimental filmmaking and the conventional rules were thrown out the window, so it is common in New Iranian Cinema to see the crew, the filming apparatus, and often even the director. The Abbas Kiarostami film Taste of Cherry (1997) ends with what seems to be behind the scenes shots of the cast and crew as they shoot various parts of the film, which would seem completely inexplicable to someone who isn’t knowledgeable about Kiarostami or Iranian films. Jafar Panahi’s The Mirror, which came out in the same year, is another excellent example, as it repeatedly shows the filmmakers on the screen in a fascinating and unique film about a girl trying to find her way home from school after her mother fails to pick her up.

Blurring of boundaries between fiction and documentary

When it comes to the blurring of these boundaries in New Iranian Cinema, The Mirror is another great example, as the little girl mentioned earlier is, in the context of the film, an actor. She tells the crew that she doesn’t want to be in the movie anymore, but they decide to keep the camera rolling and follow her as she makes her way home. Although it’s entirely fiction, it is filmed in the style of a documentary, forcing the viewer to think about whether or not it is “real.” Mohsen Makhmalbaf’s A Moment of Innocence (1996), a semi-autobiographical account of events from Makhmalbaf’s life, is another fiction/documentary hybrid, as it features dramatisations of real events that are again staged like a documentary. In Close-Up (1990), Kiarostami tells the true story of Hossain Sabzian, who impersonated the filmmaker Mohsen Makhmalbaf and tricked a family into thinking they would star in his newest film. Sabzian is played by himself, and the viewer can never be sure if what they’re watching is real footage of the actual events or re-enactments featuring the exact same people, again blurring the lines between documentary and fiction and forcing the viewer to think about the nature of fiction and reality.

Highlighting the act of seeing

With a focus being brought upon the nature of reality through unique blends of documentary and fiction, New Iranian Cinema is always making you aware of the act of seeing. This is further emphasised by things like extremely long takes or extreme long shots, which Abbas Kiarostami utilised frequently. One of the more famous examples of both an extreme long shot and a long take is a scene in Through the Olive Trees (1994) where the camera is situated atop a hill as a young boy runs down the hill, through the trees below, and across a field, chasing after a girl, until they are both in the far distance, mere specks within the frame. As well as long shots and long takes there is also a notable use of camera movements that draw attention to themselves, repetitions of scenes, and characters (whether “real” or fictional) directly addressing the camera. All of these things work in harmony to force the viewer to be more involved and think about what they’re watching.

Some of the other consequences of the rules of modesty were the making of “village films,” which were set in rural locations in order to avoid the problem of excessively modest outfits, as the different cultural context meant they were less strict. Children were also often used as protagonists as symbolic embodiments of state-imposed regulations, as the rules of modesty did not apply to children. The Mirror (1997) is an excellent example of this, as the young girl repeatedly disobeys authority figures in refusing to act in their film. The small budgets these films had also often meant location shooting and reliance on available light and sound, which adds to the documentary style of the films.

New Iranian Cinema holds a fascinating body of films from some of the most acclaimed filmmakers of all time. Abbas Kiarostami is probably the most famous director from Iran, and his 1990 film Close-Up is ranked 42nd on the 2012 Sight & Sound critics poll of the greatest films of all time. Kiarostami was popular with Western audiences because he departed from conventional structures, and he was popular with Iranian authorities because his films aren’t overtly political and they always represented a sophisticated and educated Iranian culture. The filmmaking techniques employed by Kiarostami and some of his contemporaries are highly reflexive: blurring the boundaries between documentary and fiction, highlighting the act of seeing, extreme long shots that don’t simply follow characters, repetition that makes you look for small differences and think about the filmmaking process. It all creates distanciation, separating the viewer from the subject and thereby allowing them to study it. These films make you reflect on how you watch them – where you look first within the frame and why, what attracts or repels you about a shot. You think about how movies are made and the relationship between the film and the reality that is being filmed.

The intellectual concerns and filmic style of Abbas Kiarostami and his contemporaries cannot be explained by looking at Western stylistic tropes; you have to consider the specific personal, social and political context in which their films appear. Beyond their remarkable and unique formal structure, though, they are plain enjoyable to watch by virtue of the tender, often poignant stories at the heart of them, like that of a determined young boy searching for his friend’s home in order to return a school book. If what I have discussed in this article piques your interest – even just a little bit – I implore you to give some of these films a go. It’s a decision you’re unlikely to regret. 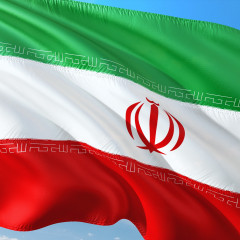 A detailed look at New Iranian Cinema and why you should check out some of the films belonging to the movement.