All the winners and best moments of The Brits 2022

The Brit Awards are back! One of Britain's biggest nights in music returns as stars such as Adele, Sam Fender and Dave all bagged awards. Hosted by Mo Gillian and broadcast on ITV, the award show also saw performances by the likes of Liam Gallagher, Anne Marie and Ed Sheeran.

This year the categories were gender-free and superstar Adele was the biggest winner of the evening, taking home awards for Mastercard Album of the Year, Song of the Year, and Artist of the Year. Adele’s critically acclaimed fourth studio album ‘30’ spent 5 weeks at the top of the charts alongside singles such as Easy On Me.

Olivia Rodrigo was also among the winners of the evening with her track ‘good 4 u’ picking up song of the year, whilst rock band Wolf Alice rightfully took home their first ever Brit award for Band of the Year after their third album Blue Weekend went to number one.

When it came to live music, Ed Sheeran and Bring Me The Horizon had it covered – opening the show with a rendition of Ed’s song Bad Habits. Northeast icon Sam Fender also treated us to a performance of his smash hit Seventeen Going Under, alongside the likes Holly Humberstone, Liam Gallagher, Little Simz and Dave throughout the night.

The full list of nominations and winners can be found below:

Song of the year

WINNER: Adele - Easy on me

Artist of the Year

Songwriter of the year

Album of the Year 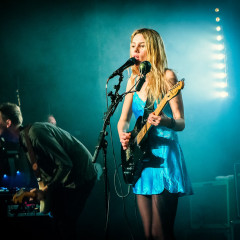 Dave, Adele and Wolf Alice are among winners at The Brits

All the winners and best moments of The Brits 2022