For most people having a vaccination is an intrusive and personal undertaking, one in which they would need to be able to put all their trust in their governing body so they would have no doubt it is a decision made in favour of their health. However, the ceaseless retraction of statements and general indecisiveness received from the conservative party across these infernal two years welcomes doubt and conspiracy with open arms.

Health minister Sajid Javid released a mandate earlier this year for NHS workers to be immunised or lose their jobs. This was met with a considerable amount of concern that it would further exacerbate a very prevalent understaffing issue in the NHS. Despite this Javid proceeded to set a deadline for health workers leading to an estimate of 60,000 jobs lost in the sector.

He scrapped the mandate just three days before his set deadline justifying that the Omicron variant isn’t as much a threat as the delta.

A statement from the British Medical Association expressed that “mandating Covid-19 vaccination raises a number of complicated ethical and practical issues” but this didn’t seem to factor into Javid’s new strategy.

Soon followed inevitable distrusts from the public to the realities of the vaccine and the safety of their health. Emerging from this mandate was the inception of anxiety and fear. The public at this moment has no real understanding of just how much of a threat this variant poses.

At the start of the vaccine roll-out, January 2021 the World Health Organization had emphasised that “community engagement should be at the centre of all Covid-19 vaccine introduction activities”

Danielle Oum, co-chair of NHS’s BME leadership network has been working across the NHS, local authority and community organisations. Reaching out to communities they’ve been able to have tremendously constructive two-way dialogues. “The feedback we get from communities helps us shape messages so they address the questions that people from different cultures might have.” when exercising an ‘ask us anything’ approach, people felt their concerns were heard and taken seriously. “We took time to allay their fears”

Javid’s approach to immunising the nation is an exemplary model of the government’s negligent and thoughtless solutions to protecting citizens. When attempting to address every individual in Britain and expecting mass conformance, time and forethought need to be put in, to work through concerns and appeal to the people. Therein lay the grounds of democracy. 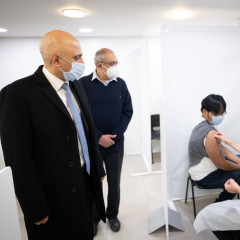