Tracks on an album can serve many purposes. They can be stand-alone pieces or be part of an overarching narrative that the album communicates. They often are arranged in such a way to take the listener on an emotional journey that the producer is attempting to guide them along.

The indie music community especially adopts the idea of a through-narrative communicated over an album. Some albums, such as In the Aeroplane Over the Sea by Neutral Milk Hotel, are famously interpreted less by their individual tracks but by the larger narrative those tracks construct.

The Race for Space, Public Service Broadcasting’s second studio album, is one of the most effective products of this production philosophy. It captures the excitement, wonder, fear, and unifying sense of humanity that defines much of the public perception of the Space Race.

PSB are an English indie-rock group from London. Their signature musical conceit uses recordings of public service broadcasts as a central part of their music. The recordings are mixed into the song, using some of the natural rhythms that occur within the speech as major parts of the musical motifs. Likewise, they edit the audio from the broadcasts to fit better with the direction of the music.

The music becomes like a soundtrack for the narrative being told by the recorded speech, but the recordings themselves are actively a part of the performance. In The Race for Space, PSB hit on some of the major historical points of the Space Race, from the launch of Sputnik, Yuri Gagarin becoming the first man in space, to the Apollo landing and final Apollo mission.

Writing about this album for theartsdesk.com in 2015, Thomas H Green writes that one of the achievements of The Race for Space is igniting a sense of the wild excitement, and specifically media hype, around the Space Race.

“The 1960s media's wild excitement about the space race is now almost forgotten. The era when every boy wanted to be an astronaut is ancient history.”

I’d argue, six years later, that this is no longer the case. The ever-approaching reality of a crewed Mars mission, especially with NASA’s plan to revisit the moon with the Artemis Programme, plus a growing awareness of the planet’s manufactured ecological deterioration, has contributed to a growing sense of humankind looking hopefully towards the stars for our future.

This has been reflected in the media being produced.  With games like Surviving Mars, shows like the literally-titled Mars, and films like The Martian, among but a few media looking towards the future of human exploration to the Red Planet. Perhaps naturally then, there also seems to be a keen interest in looking back into the past of space travel as an indication of where to look to the future — NASA’s new crewed mission to the moon being named after Apollo’s sister (and moon goddess) Artemis from Greek mythology being but one of many examples of clear references to their past endeavours.

I came to The Race for Space after recently watching Apple TV’s brilliant show For All Mankind. The show follows an alternative history of the Space Race where minor changes to the timeline of space travel, as we know it, creates radical change. This album summons that same sense of excitement and curiosity as the show and shares the effect of showing the human element to the story.

One particularly powerful moment of humanisation achieved in the album comes in the track Go!. Contrary to the common perception of rocket scientists being simply-business geniuses in lab coats, this track effectively communicates the energy and joy of mission control as they guide the lunar module to the surface.

The track title comes from the broadcast of Mission Control going through flight checklists as the Apollo crew make their final approach to land on the surface of the moon. The music quickens in pace and gradually builds as the control crew go through the checks. Each “Go!” response becomes a core part of the song’s beat, driving the rhythm and embedding their sense of nervous excitement directly into the music.

In both Go! and The Other Side you can hear snippets of the scientists at Mission Control celebrating when they hear back from Apollo 11 and 8 respectively, in The Other Side you can hear the man at the communications console choke up as they finally hear back from the astronauts, and in both songs they actively acknowledge the cheers and celebration in Housten. PSB very effectively takes you on that journey from building tension and jubilant celebration by the use of their musical material and its relationship to the broadcast recordings.

I didn’t even mention the captivating funk rhythm of Gagarin and the use of big band sound to highlight the newfound rockstar status the Russian cosmonaut found himself with (as the first man in space). Or perhaps the harrowing and sobering experience of Fire in the Cockpit, which follows the tragic death of Gus Grissom, Ed White, and Roger B. Chaffee, on the launchpad during a launch simulation of Apollo 1.

The individual artistry of the tracks is masterful. However, what I find most fascinating about The Race for Space is their use of the public service broadcasts as a vehicle to tell the Space Race story and how music becomes an integral part of telling that story.

I would highly recommend listening to this album from beginning to end to get that experience. It’s not one to listen to while working or doing something else that requires deep concentration, as listening closely to the characteristically fuzzy audio of the announcer is crucial to appreciate the tracks. However, it is definitely something you could listen to over a meal. Although you might feel the need to get up and rock out to some of the especially funky sections, I know I certainly did! 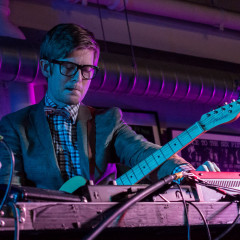 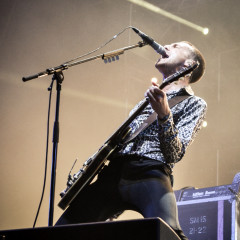