COP26 has been an unfortunately un-communicative affair, with many people feeling alienated and disconnected, due to both the event and the impending threat of climate change itself. The IASS’s Co-Creative Reflection and Dialogue Space at COP26 hosted an event allowing participants to explore their feelings about COP26 through visuals and discussion. Two of Voice’s Trainee Journalists attended the event and share their experiences here.

But added to that (perhaps because we’re all so depressed) everyone there seems closed off, rushing around in their own little worlds. I had expected COP26 to be a time to meet people from all over the world who cared about climate action as much as I did, but instead I have spent most days feeling more alienated than I ever have before in my life, sitting alone and cold in the smoking area looking at the litter scattered across the ground.

It was because of this alienation then, that the session at the IASS Co-Creative Reflection and Dialogue Space affected me so deeply. It felt like fate that I’d even ended up there at all. I’d been supposed to go to a workshop in the north of Glasgow, but I forgot my press pass and missed my train. Then I thought I’d attend a meeting at COP, but I arrived a minute too late and was turned away. So, I wandered around and ended up at IASS’s space for their art therapy session on exploring how we felt about COP through visuals.

As soon as I sat down, for the very first time in the week or so that I’d been at COP, someone turned to me and introduced themselves and started a conversation with me. Not only that, but that person, Roos from the Netherlands, expressed exactly the same feelings as me – that she’d come here hoping to meet people from all over the world who were passionate about the environment but had instead felt disappointed and let down.

This became a theme as we started talking as a group, with others expressing that they also felt let down by COP or felt that there hadn’t been this sense of community and union that they’d hoped for – and that is needed to truly tackle climate change. For the first time within COP itself, I felt again like it was possible to tackle climate change and that there were people who cared. When a woman from Russia joined us and had a little trouble understanding what was being said, everyone within the group worked together to help her understand in a calm and empathetic manner – the first time I’d seen people helping each other during the whole summit.

People also opened up and spoke honestly and passionately about how they felt, everyone willing to share and communicate with people they’d just met in order to make the session work. I personally felt like something profound was revealed to me, which I tried to express to everyone the best I could, but I stumbled a little. But the gist of it was that through a series of random events I’d ended up here and then through a series of randomly picked cards within the session, I somehow managed to finally get to the root of my loneliness and hopelessness at COP.

At one point I randomly picked the card with ‘HATE’ written around the edge and it seems a little silly now but that was the prompt I needed to make me realise that yes, I had been letting hate grow in me during COP26. My feelings of depression and alienation had turned to feelings of blame and hate to the people around me, and had become a sort of self-fulfilling prophecy – my COP experience being negative because I had begun to refuse to be anything but negative. Being able to finally identify and confront that has been invaluable – both to my experience at COP and to my mental health in general. All in all, the whole thing served as a wonderful reminder that the climate crisis can only be tackled through community and empathy, and to foster that, you first have to reach out to the people around you, and not just wait for them to speak to you.

Unlike Dulcie, I had already planned to attend the IASS event. It was quite the coincidence when I heard my fellow journalist's voice as I was sitting in the circle waiting for the event to begin, writing notes on my phone, more or less tuned out to the world around me. I suppose that's as good as any segue into why I rocked up to this particular session. Writing notes, whether on my phone, in a jotter, or on my laptop, seemed to me to be my entire experience at COP26. With so much going on I felt I had to capture everything, but with the hive-like nature of the conference, in which everything seemed to be happening at once, and with all of it seeming important, this left me feeling a little stretched thin.

It wasn't like I was a bright-eyed, impassioned patron keen to sketch it all down so I could rave about it to anyone who would listen. I was mostly just thinking to myself, "this event is so important, these people look so important, oh God what am I doing here?" And so invariably, the answer to that question was to observe, and to write it all down.

Which was a remarkably disconnected way of viewing things. The discussion space appealed then, because of its promise of real conversation, a chance to get involved with the discourse. It truly was a breath of fresh air. Nine of us, including the moderator, gathered together from all over the world to do something that no panelist I'd listened to had done throughout the entire duration of COP26 – speak sincerely.

I'll admit it took a bit of getting used to. As someone who had been caught up in the hustle and bustle of COP26, my insecurity at being a relatively junior representative at the event led me to use my first chance to speak as an opportunity to sound like I knew what I was talking about.

As a quick explanation for how the dialogue was formatted, each of us took a card from a pile and had to explain how the image on the card related to us and our feelings about COP26. We were encouraged to build off of what the other members of the group said. After the first round of discussion, we all drew random cards that had specific words on them. Words like 'Hate', 'Change', and 'Self-Defeating'.

My initial card depicted a set of hands turning over a row of cards. I played upon my literature theory background and spraffed on about how turning over the cards represented the uncertainty of young people, and the necessity to play whichever cards life dealt you.

I did this because I wanted to give a 'good' answer. It's funny, I had an unconscious idea that I would receive a bad grade if I wasn't insightful enough, despite the event having nothing of the sort. When everyone else started speaking, I was delightfully surprised to hear some genuine sincerity. Everyone talked about their uncertainty and their emotions. Most of them voiced their cynicism. But crucially, everyone was listened to. People were respectful, even encouraging, no matter what was said. It was genuinely lovely to witness.

After that I put aside my own self-consciousness and just spoke about how I truly felt. The word I was randomly paired with was 'fear', and ironically enough when I began to speak about how the word related to my card and my feelings about COP26, I began to realise that I didn't really have any real fear associated with the event. Despite how important it was for the planet, and despite the fact that I was entirely certain that nothing good would come of it, I wasn't at all worried about discovering that I was right. In short, by talking about fear, I realised that I was, to an extent, a bit apathetic. Because of how little I expected there to be a positive outcome to the conference, I didn't feel like there were any real stakes. But this attitude isn't helpful. I'm still reflecting on how I need to balance my pessimism with actual action, and no conclusions have been reached, but isn't it good that the IASS event has actually impacted me even beyond the discussion?

I guess the function of the cards wasn't necessarily to be explicit sources of profound meaning. They were more like a lightning rod, a way of forcing me to direct my jumbled up thoughts and emotions surrounding the conference and force them into a very specific context, thereby pushing me to properly process them.

This event was by far the best one I attended during my time at COP26. For there to truly be progress in climate action, we need far fewer panels talking at the audience. No more sound bites or self-aggrandizing platitudes. Actual discussion, open, flowing, honest, is the way forward. 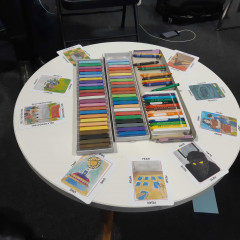