Reports revealing a lack of government commitment on climate issues and increased sanctions on protesting leave me doubtful as to what the climate summit can really achieve.

The climate summit COP26 began in Glasgow yesterday and will continue for the next two weeks. It is where world leaders will hopefully commit to effective climate action to achieve net zero. I’m going to be one of the Trainee Journalists at Voice covering the event.

I personally have little hope for what the summit will achieve in terms of world leaders’ commitments. There have been several recent instances of politicians sacrificing environmental needs, such as the UK dropping climate asks to secure a trade deal with Australia and Australia, along with Japan, Saudi Arabia and other nations lobbying to change a report that highlighted the danger of fossil fuels. Faced with these facts I don’t believe that enough change will be set in motion as a result of the summit. To tackle climate change, the changes we need to make would have to be drastic and radical, and with the UK’s response – and indeed the whole summit – in the hands of a right-wing government I don’t believe I can trust that happening on their terms.

So, for me, the most interesting and exciting parts of COP26 will be what’s happening outside of it. The protests and the fringe events are the places where I’m expecting to see people talking about what really needs to change and making genuine commitments to doing so. Protests are also normally how governments can be pressured to change, but with the UK government’s recent policing bill that seeks to impose tougher and tougher sanctions on protesters, it remains to be seen whether protesters will even be properly allowed to make their voices heard.

However, there are some things happening as part of COP26 itself that I am looking forward to. There’s going to be a meeting with Indigenous peoples and traditional knowledge holders that I think is incredibly important. Indigenous people consistently have been at the forefront of living sustainably and any steps we can take towards following their lead are steps in the right direction. However, because the information available on the schedule is so confusing and the event is so poorly managed, I have no idea if I will actually be able to listen in on the meeting at all. One of the many joys of COP26...

Also, as someone who lives in Glasgow, I, like many other residents of the city, can’t help but mostly see the event as an annoyance. It seems somewhat apt that the event is causing such trouble to normal peoples’ lives. A bunch of rich people fly into the city, causing pollution and disruption, to make vacant promises about living greener whilst the people who have drastically smaller carbon footprints are either unable to participate or have their normal work and life made harder by the event. As always, the people who should be leading the change are not given the opportunity to do so. At least, that’s how I see it. 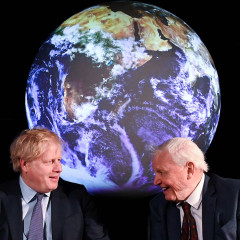 Will COP26 truly change anything? It's hard to be optimistic...

Reports revealing a lack of government commitment on climate issues and increased sanctions on protesting leave me doubtful as to what the climate summit can really achieve.