Voice MagBlogsFive of the stranges…

Musicians, artists, comedians, and more have often turned to alter egos to express their darker, dafter, or more daring sides. Here at Voice we’ve taken a look at some of the more odd and interesting instances of alter egos in the pop culture canon.

Pulp frontman Jarvis Cocker formed his alter ego Darren Spooner sometime in 2002 as one half of the band Relaxed Muscle, along with All Seeing I’s Jason Buckle going by the name Wayne Marsden (allegedly the name of a boy who bullied Cocker at school). Spooner claimed to have met Marsden whilst completing community service planting flowers for a burglary offence. Relaxed Muscle billed themselves as “the sound of young Doncaster” and played sleazy and thudding electro. Spooner expressed a deep love of karate, saying that it turned his life around, and was known to karate-chop balsa wood onstage and break sugar glass bottles over his own and others’ heads. Spooner often appeared in a skeleton outfit with heavy and smudged dark makeup covering his face, which he claimed was to hide a disfigurement that happened as the result of chemical burns he acquired whilst cleaning a silo. In 2003 Darren claimed to be 44 years old, have a wife named Mary, and two sons (one of whom was also named Darren) who were both drug addicts. Spooner’s relationship with Mary came under strain due to a spate of heavy drinking and a job “doing long-distance lorry driving”. Spooner’s real identity was revealed by The Sun in 2003 but Cocker continued to perform as Spooner for a while afterwards, with Relaxed Muscle fizzling out shortly after their release of their only album in 2003.

Mikey Georgeson as The Vessel

Musician and artist Mikey Georgeson is perhaps best known for his time in the late ’90s and early ’00s as the frontman of art rock band David Devant & His Spirit Wife. During the first part of the band’s career, Georgeson would perform as The Vessel, through which English stage magician David Devant would supposedly communicate. The Vessel expressed to Brighton’s Punter magazine: "It's quite simple really, as a magician Devant didn't really fulfil himself so he said 'I shall walk down the corridors of contemporary music', so he chose us. I am his vessel." The Vessel would appear in a black pompadour Elvis-like wig, pencil moustache, and sparkling and ’70s-inspired outfits. He would often appear “flying” on a magic carpet or as a shadow projected on a screen. He would also occasionally be sawn in half by roadies and on one occasion was fired from a cannon, appearing at the opposite end of the venue, clothes tattered, and face blackened from the explosion. David Devant & His Spirit Wife have continued to perform and make music over the years but in 1999 Georgeson was filmed setting fire to his pompadour wig and The Vessel was alas, no more.

Andy Kaufman was a lauded comedian in the 1970’s, mainly due to his many different alter-egos and individual approach to comedy, The most famous and interesting of which is Tony Clifton, a lounge singer whom Kaufman had apparently met whilst waiting to meet Elvis Presley. Kaufman would play Tony Clifton on stage as his opening act often, and many were clueless as to who the man was, thinking he was indeed an insufferably rude musician. Clifton was seen as the antithesis of one of Kaufman’s other characters, “Foreign Man”, whilst the latter was more subdued and confused, the character of Clifton was portrayed as obnoxious, annoying and downright rude.

Kaufman would often use Clifton to remark in intentionally unfunny ways, he would patronise others on talk shows as well as call out and compete with the biggest stars at the time, once stating he sold more records than Elvis and The Beatles combined. To begin with, Kaufman fooled many who thought Clifton was indeed real, with news companies interviewing his alter ego as a real supporting act. Clifton despised Kaufman, saying that the comedian was using his name to “go places”. Kaufman is not the only performer to portray Clifton, as he also once enlisted his brother to play the role, the comedian would then appear on stage next to his alter ego. Even after Kaufman’s death, Clifton has appeared in media, recent appearances include the 20th anniversary of Kaufman’s death, Comic relief, and more recently, an appearance in 2012 on the podcast WTF with Marc Maron, where he was promoting his live show, The Tony Clifton Revue, which he performed at The Comedy Store in Los Angeles.

Daniel Dumile was a legendary hip-hop artist that used multiple aliases when releasing music, most notably MF DOOM. Dumile’s adoption of alter-egos has become a staple of his fame, there are so many projects that he has created under so many pseudonyms that it can be hard to find his entire output, which is no doubt exactly how the artist wanted his music to be digested. Dumile first started his career in a rap group with his brother, named KMD, where he went by the name of Zev Love X. The lyrics were the most honest of Dumile, focusing on the political and conscious ideology of his youth.

After the death of his brother during their second album, Dumile finished the record and left music for six years. When he returned he had changed his stage persona to MF DOOM, which would become his most famous alias, known for his metal facemask that can be likened to the one that Marvel character Dr Doom wears. MF DOOM was darker and more technical, in an evolution of Dumile’s rapping style that was authoritative. Under this name, Dumile would change the face of hip hop forever, and influence many of the biggest artists around today. Sometimes, Dumile himself wouldn’t turn up to shows and put someone else in the mask instead, as to continue his mythology and protest the commodification of his art. Comedian Hannibal Buress recently spent time as a “DOOM imposter” in 2019.

Another alias of Dumile was Metal Fingers, his strictly production focused project, lending beats to many rappers over the years and releasing four solo albums. King Geedorah was another character of Dumile’s, performing and producing hip hop that looked at the genre from an outsider or “alien” perspective. Viktor Vaughn on the other hand, was Dumile’s outlet to be rude, controversial and strange, the concept of the character being a mad scientist who had gone back in time. Dumile was constantly changing persona throughout his career, in an aversion to notoriety, which actually garnered him more fame and a cult following.

Ann Coates is a fictional singer jokingly credited on the “Bigmouth strikes again” single by The Smiths. Singer Morrisey and co-producer Johnny Marr decided the sped up harmonies of Morrisey in the background of the single should be credited to the fictional Ann Coates, the embodiment of Manchester's district of Ancoats.The whole “The Queen is Dead” album was a subtle jab at the music industry. In the summer of 1985, the songwriter vented his frustration at the business by writing ‘The Boy With A Thorn In His Side’, ‘Rubber Ring’ and lastly ‘Bigmouth’ which concluded the arc. Initially the band had asked Kirsty MacColl to contribute backing vocals, but Marr found her harmonies "really weird" and they were left off the final recording. Instead, the backing vocals were recorded by Morrissey and altered to a higher pitch to appear feminine. The reactions from fans were mixed. Some thought it was a genius sarcastic jab at the industry and others felt the vocals felt ‘weird’. 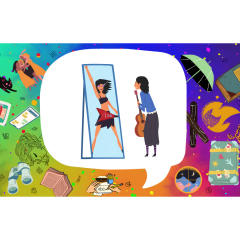