Inspiring and innovative Black creatives to support during Black History Month and onwards.

As Black History Month continues, it is also a time to consider and support Black futures along with Black histories. Voice has compiled a list of Black creatives to watch whose work is inspiring, creating, and sustaining Black futures.

Master Satanas a.k.a The Uhuruverse

Master Satanas is the New Orleans based creative behind projects such as the band F*ck U Pay Us, Black Indigenous queer artist collective #SNATCHPOWER, and multimedia project The Uhuruverse. He is an artist, activist, musician, and has a M.S. degree in Christian Ministry. He and his work are focused on Black and queer community, challenging oppression and encouraging liberation. He is also the creator of the Uhuru Dream House project, a Safe Art House for Black, queer, trans, and intersex people, and sex workers. The Dream House will offer protection and emergency/transitional shelter, rehabilitation spaces, garden space for growing food, and host community art events and workshops. The Uhuru Dream House still requires support and funding to be fully realised, which you can help withhere. You can keep up with Master Satanashere and his music as the Uhuruverse is available to listen tohere.

Cardiff based creative Nicole Ready is the editor of Docks Magazine, a publication which will pay tribute to the people of Cardiff docks, especially its communities of colour, who make up the majority of its population. Ready wants to highlight the intersection of discrimination that Welsh people of colour face, from outside and from inside Wales. Docks Magazine will be an annual publication, with its first issue coming soon. Ready was recently paid tribute to in a mural in Cardiff from Cardiff-based collective Unify. The mural depicts Ready in Wales’s football shirt along with the slogan ‘My Cymru My Shirt’, from a photo project of the same name that sought to use football as a medium to "celebrate different communities, to promote diversity and champion inclusivity, in a very authentic, genuine way". You can join the mailing list for Docks Magazinehere and follow Nicole Readyhere.

Self-funded filmmaker, poet and mother Jeanetta Rich’s first film Desperate LA premiered at the Brooklyn Film Festival this summer, Jeanetta explores a notion put forward by Selma Hayek and Jessica Williams in a recent interview “Who are you outside of your Blackness”telling the story of a young black woman (Homegirl) trying to just be herself, going through regular womanhood with the trials and tribulations every woman faces. She is a native to Los Angeles and uses her experiences as a black woman to give a voice to voiceless women in her community, in her own words “those who have been silenced through poverty and/or lack of education.” She calls for a stop to “selfie mode” and to pull a community of women into focus. You can learn more about the film and Jeanetta Rich here

Born Anais Oluwatoyin Estelle Marinho ‘Arlo’ is a British poet and singer-songwriter making indie pop/ neo soul music, getting their first exposure to the public on ‘BBC Radio’s Introducing’ which showcased unsigned, undiscovered and under-the-radar UK talent with their demo tracks that quickly caught people's attention. They then went on to release their solo debut Cola in 2018 and in 2021 they released their first studio album Collapsed in sunbeams which peaked at number 3 on the UK Album Charts and earned nominations for Album of the Year, Best New Artist and Best British Female Solo Artist at the 2021 Brit Awards. A proud Bisexual they sing about sexual identity, queer desire, mental health and body image never speaking for the group but on a very personal level which gives their music a very relatable air commenting that “we’re all learning to trust our bodies, making peace with our own distortions”. You can find out about Arlo and their music here

Fatimah Nyeema Warner, known widely as her stage name Noname, is a Chicago based poet, musician and producer, she is mostly renowned for her musical output in the rap/R&B scene. Her poetry is complex, educated and thought-provoking, and her work highlights social injustices through the inspiration of anti-capitalist theory. Noname started out as a slam poet back in 2010, before gaining further recognition after being featured on the track Lost, from Chance the Rapper’s mixtape, Acid Rap in 2013. Since then, she released her debut mixtape, Telefone in 2016, to wide critical acclaim. Then in 2018, she released her first full length album, named Room 25. Noname has run a book club since 2019 too, one that champions radical authors of color. Before she was featured on the 2020 track Lockdown by Anderson .Paak, Noname had announced that she was going to focus on her book club, which has been gaining more and more traction as she partners with libraries across America. Recently, she has announced that she is building a base of operations for the organisation, a place where people can get political education classes, take out books in person and attend free art shows. To check out what Noname is up to, follow her Twitter here, and her Spotify here.

Pa Salieu is a Gambian-British rapper and singer based out of Coventry, he is renowned for mixing more traditional elements of afrobeat with the abrasive nature of grime and drill music. Although Salieu only released his first mixtape, Send Them To Coventry in 2020 and has that alongside a handful of singles and a short EP, he has managed to make an authoritative name for himself over the past year, despite the tribulations that the pandemic brought. This success is partly due to his already star-studded features list, including the likes of FKA Twigs, Slowthai and SL, all of whom champion the UK R&B scene and have loyal fanbases. Salieu’s talent is undeniable, to be a young man able to conjure up a large following in such a short space of time – and in this musical landscape – is truly commendable. He is definitely one to watch over the next couple of years, there is no doubt that his popularity will skyrocket even further if he carries on releasing such individual sounding music and cultivates his style further. You can listen to Pa Salieu here, and follow him on Twitter here.

Chella Ramanan is a narrative designer for Ubisoft subsidiary Massive Entertainment. Together with Claire Morwood she founded the micro studio, 3-Fold Games, whose debut game was nominated for the prestigious Game Beyond Entertainment BAFTA award. The game in question is entitled Before I Forget, a narrative-heavy experience that sees the player take on the role of a woman named Sunita, who has early onset dementia. It is a remarkable piece, largely due to the intricate marriage between narrative and gameplay, with the player interacting with objects that spark memories and bring colour to the grayscale design of Sunite's house. Working as a game journalist for 18 years, Ramanan was a frequent writer of fiction but did not voyage into video game narratives until a games retreat hosted by a literary foundation. A chance meeting with Clair Morwood at the XX+ Games Jam in Bristol led to her first foray into independent game design. Since then, she has co-founded POC in Play, which is a diversity organization intent on furthering inclusivity and representation in the games industry. She is dedicated to writing narratives from underrepresented perspectives and advocates for more recognition of videogames as an art form. You can find out more about Chella Ramanan and listen to her podcast here.

Despite only working in the graphic novel industry for four years, Jamal Campbell has made a name for himself as one of the most prolific up-and-coming comic book artists and freelance illustrators on the scene. Based in Toronto, Canada, the artist has been commissioned a number of times by both DC and Marvel, along with being a frequent contributor to Boom! comics and their Mighty Morphin Power Rangers series. His artistic technique adheres to a sort of stylized realism, allowing his covers to distinguish themselves from the more standardized styles that have become a tad overbearing in recent years. His backgrounds especially demonstrate his dedication to the art form, with details that give the worlds he draws a completeness many would not expect from a comic book panel. Just 23 when he began his career in illustration, he has done artwork for Guardians of the Galaxy, Amazing Spider-Man, The New Mutants, and many other iconic characters. He co-created the DC character Naomi, and his time spent working on that series led to a nomination for Comics Alliance's Best New Webcomic. His website can be found here.

Tee Franklin is a black, queer, disabled comic book writer for Image Comics. She was the first black woman hired by the company and is the creator of the #blackcomicsmonth hashtag. Tee is a bestselling award winning comic writer for her work on Bingo Love and Harley Quinn: The Animated Series - The Eat, Bang, Kill Tour. Tee Franklin wrote her miniseries Jook Joint as a therapeutic release to deal with past trauma. She regularly speaks out about the lack of representation in comics and the lack of accommodating at conventions. 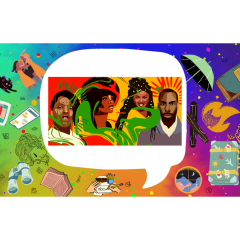 Black creatives to watch out for

Inspiring and innovative Black creatives to support during Black History Month and onwards.