Voice MagFeaturesLuke Cage is the mos…

The real villains of Luke Cage are entrenched racism and gentrification, and their acknowledgement is important for society.

For those who may not be aware, Marvel and Netflix have had a good thing going with their offering of TV shows. They already have had three seasons of two franchises – Daredevil and Jessica Jones – and both had had critical success. Now the partnership is progressing in a new direction with Luke Cage, and offers much needed social commentary.

How do you make a show about a bulletproof man have suspense, or even risk? This is a question I asked myself when I first heard the show was being made. It's an issue that Superman has been plagued with for years, and let's be honest, the latest offerings from DC don't do much to quell that.

The eponymous Luke Cage nails this problem in a number of ways, and none of them cheapen the overall character. His introduction in Jessica Jones as the bulletproof, diamond skinned bar owner who just wants to be left alone set him up perfectly as a character audiences wanted to know more about. We rejoin Cage a few months after the conclusion of season one of Jessica Jones, and Cage has left Hell's Kitchen and returned to Harlem, and still is simply seeking a quiet life.

Mike Colter successfully balances charisma and grit, gentleness and ass-kicking in his portrayal of Luke Cage. The cocky, self-assured smirk he pulls when faced with a room full of bad guys who don't yet appreciate their powerlessness is incredibly fun to watch. Because of his inability to be hurt, his fighting style is much less nuanced that Daredevil, but is choreographed to demonstrate his raw power and strength.

I found that there are two central themes to Luke Cage – the opposition to gentrification, and the continued victimisation and opposition black people face in society, with the two often going hand in hand.

With a majority black cast, and a black superhero protagonist, Luke Cage serves to empower an otherwise too often marginalised group, and represent the culture of Harlem. It provides crucial social commentary on how black people are portrayed in the media. Despite all the good that Luke Cage does in the community, all too quickly the police are suspicious of him, and subsequently hunting him down. The attacks on the black community after the death of an officer are particularly poignant, and all a little bit too close to reality.

While Marvel's Cinematic Universe may be lacking in strong villains, the same simply cannot be said about their TV offerings. Starting with Fisk in Daredevil, and Killgrave in Jessica Jones, the viewer is treated to a deep and complex villain, with relatable – although misguided – motivations. They aren't evil just 'because', but instead operate beyond the law because of their social upbringing, traumas in their past, or it being the only avenue available to them.

This is most definitely the case with Cornell "Cottonmouth" Stokes, and his cousin Mariah Dillard. They were raised in a gang culture, with Dillard's mother being a notorious mob boss. They are both products of the environment they were raised in, and while they both strive to "keep Harlem Black" and fight off gentrification, they are self-sabotaging their efforts for a better Harlem through the methods they adopt. Drugs, weapons, and prostitution in the pursuit of power and control undermine the goals of liberating black people.

Yet, they aren't just your typical 'evil' antagonist because the plot demands it. They are complex. They're emotional. They have fears, doubts, ambitions and goals. They are trying to make the most of what they have, and preserve their culture while elevating it from the slums.

Even when quite clearly the 'villain', you still really get the sense of belonging; that they are embraced by the community of Harlem, who come together in anger, disappointment and fear as a result of their treatment at the hands of the police.

What really sets this this show apart is the use of music. Live hip-hop music is interlaced throughout the show, and perfectly reflects the tone and mood at any given moment. Even when not live-performed, the accompanying music is amazing, and reflects Harlem and its urban black roots. It's really a work of genius, and there definitely needs to be a soundtrack released!

The show is by no means perfect though. There are points where the show – so often expertly grounded with a realistic feel – starts to feel almost like a caricature of itself. There are times where you really have to suspend disbelief at the wooden and awkward moments that are present purely to progress the plot. That being said, the fact you only have to do this rarely is, in itself, a testimony to the strength of the show, considering it stars a bulletproof man! Equally, the plot, which carries the show so perfectly in the first half, all too quickly stumbles under its own weight, and the newly introduced villain is a mistake I hope the producers learn from going forwards.

I've been trying to not give away too much of the plot for Luke Cage, which I appreciate may be frustrating for reader, but this is really something you should watch for yourself. It's not perfect programming, the show could have maybe gone through a second edit, and the writing could be a bit less flabby, but couldn't we all be! The show does a lot right, and everything it does right dramatically outweigh the issues, which really only pop up in the second half of its 13 episode run.

The very fact there is a black hero on our screens, front and centre, tackling issues faced by black people is a huge step forwards. When watching it you sometimes are lulled into the comfortable mind-set that it's not like this in real life, but then you only have to look at any American news outlet to have that bubble burst. Black communities are under threat from gentrification and systematic prejudice, and are under-represented on screens. To date, the only black superhero we've been introduced to, in Marvel or DC, is Black Panther, and, being realistic, he was only there to increase the level of tension in Civil War.

Netflix and Marvel have proven beyond doubt that the success their two existing TV series have had were not luck, and with Luke Cage they have demonstrated that they can shake up the formula. It's not that the Daredevil and Jessica Jones have played it safe to date – Jessica Jones tackled themes of domestic abuse and rape! – but to provide commentary on such a current and divisive subject should be applauded, and is worthy of your attention and time! 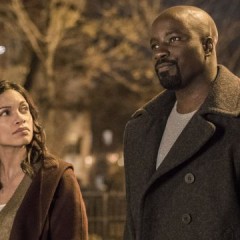 The real villains of Luke Cage are entrenched racism and gentrification, and their acknowledgement is important for society.