The two biggest superhero movies of this year have a lot more in common than fans would perhaps like to admit...

This year promised some of the biggest titles in comic book history, Deadpool, X-men: Apocalypse, Suicide Squad, Civil War and Batman and Superman, not to mention less known characters like Doctor Strange. Out of the four that have already been released, two of them were fighting it out for the top spot.

Having seen both BvS and Civil War, I noticed there were some similarity, and subsequently realised they were the same movie. Don't believe me? Well here are 10 reasons why Batman v Superman and Captain America Civil War are the same.

Just a word of warning this article those contain some MILD SPOILERS so if you haven't seen either movies I'd recommend seeing them or maybe just Civil War (personal opinion).*

I prefer Civil War more because it's a better movie. Nothing is squeezed and crammed into a 2 hour long film, it actually has a structure that makes sense and links well with everything. I appreciate the effort made by Zack Snyder (director) for attempting to bring the I Am Legend easter egg to our screens four years after it was predicted in that movie. Nevertheless I didn't appreciate the way things were shoe horned in that movie.

On a lighter note, the best part in Civil War was the ending when Tony and Cap fight in the hydra hideout. The idea that Zemo planned to have their revenge consume them meant that Marvel was moving towards a better path of storytelling where we care about the consequences. I do believe that the movie had a big advantage because of the buildup it had from previous Marvel movies but should that be an excuse for DC fans to justify the poor quality of filmmaking in Batman v Superman? I don't think so...

Overall civil war definitely one of the best MCU movies and worth a watch; the best part of Batman v Superman was Wonder Woman. I'm not really excited for her movie, but she was more involved than both batman and superman in that fight against doomsday - she actually did more damage to Doomsday then Superman did!

*Editor's note: The Ultimate Edition of BvS is a lot less disappointing than the theatrical release - and there's a quote for your DVD cover, DC! 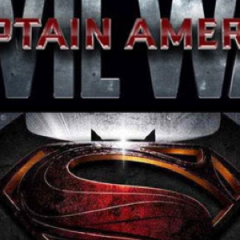 The two biggest superhero movies of this year have a lot more in common than fans would perhaps like to admit...