Here we are again, the nominations for the 2016 BAFTA Film Awards have been released. Let's go through them together, shall we?

Carol, a period drama about a lesbian love affair starring Cate Blanchett, and Bridge of Spies, a wartime spy thriller with Tom Hanks from Steven Spielberg, lead the pack with a generous nine nominations each. Following just behind is The Revenant taking eight with that Leonardo DiCaprio performance from last year's Oscar claimant, Alejandro Gonzalez Inarritu. Following them is Mad Max: Fury Road with seven.

The awards circuit seem not to be too keen on a regular favourite's latest oeuvre, Quentin Tarantino's The Hateful Eight which manages three nominations. Just like Spotlight does, a film which is effectively unheard of in the UK. This week will see the release of the unstoppable Room starring first-time leading film actor, Brie Larson, who, despite it being her leading debut, is doing well in the race for Best Leading Actress.

Amy, the documentary about Amy Winehouse which brought her music soaring back into the charts, and one of the best films I've seen this year, is nominated for both Best Documentary which it is almost certain to win, and Best British Film.

Also under consideration is the EE BAFTA Rising Star Award which pits together film acting newbies: Brie Larson for Room (the only one with another acting nomination), Taron Egerton for Kingsman: The Secret Service, Dakota Johnson for Fifty Shades of Gray, Bel Powley for The Diary of a Teenage Girl, and John Boyega for Star Wars: The Force Awakens (despite having already starred in the acclaimed Attack The Block back in 2011). I'd like it to go to Larson but as this award is voted for by the public, it's more likely to go to Boyega, confusingly, or Egerton.

Alicia Vikander takes quite the monopoly on acting nominations, as she has in the Golden Globe nominations. She's one of few people ever to be nominated for both Best Leading Actress (opposite Eddie Redmayne in The Danish Girl) and Best Supporting Actress (in the indie juggernaut, Ex Machina). Both her films take five nominations each, too. Leading on from Vikander, we're all wondering, can Eddie do it twice? Can he win the Leading Actor BAFTA two years in a row? Or perhaps BAFTA feels a bit sensitive to award such a niche and slightly controversial tale, based on the surprises in their list of nominations...?

BAFTA seem to have slipped from tradition this year with unexpectedly little recognition for this year's British films. Not one Best Film nominee is British and there are glaring absences by 45 Years, Spectre, Macbeth, and The Lobster. Only the first and the last take one nomination each. 45 Years' Charlotte Rampling is racing ahead across the rest of the awards circuit for Best Leading Actress but not recognised by her own academy. Spectre deserves recognition in craft categories and yet, none.

Another substantial surprise comes with zero nominations for Joy, the third outing by David O'Russell with Jennifer Lawrence and Bradley Cooper. While Joy hasn't been as successful as O'Russell's previous recent work (Silver Linings Playbook won Lawrence her Oscar among numerous nominations, American Hustle famously nominated for ten Oscars but won zero), you'd expect some grace considering their reputations in the award circuit.

What's more, where on earth is Helen Mirren?! Surely she gets at least a nomination a year, no? No. This year, despite two high profile performances, leading Woman In Gold and supporting Trumbo, she's been left out. Is BAFTA trying to pander to American tastes by leaving out British expectations, or is it just a coincidence? Something to think on...

Take a search for your own surprises in the full list below:

The Big Short
Bridge of Spies
Carol
The Revenant
Spotlight

Best Film Not in the English Language

Inside Out
Minions
Shaun the Sheep the Movie

Bridge of Spies
Ex Machina
The Hateful Eight
Inside Out
Spotlight 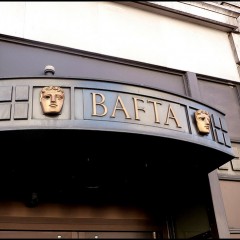 Here we are again, the nominations for the 2016 BAFTA Film Awards have been released. Let's go through them together, shall we?